The new Love Cambridge Independents brand can be exclusively revealed by the Cambridge Independent today, ahead of its official launch tomorrow. Ian Sandison, CEO of Cambridge Business Improvement District (BID), which is behind the brand, writes here about the work to help independent stores thrive amid the challenging high street climate.

A survey conducted by this newspaper recently confirmed how important independent stores are. When asked the question: ‘Which is your favourite type of shopping destination?’, nearly half those shoppers interviewed (47%) responded: ‘Independent store’.

Cambridge boasts over 250 of what we would call “open-door” independent businesses (bars, restaurant, cafés, beauty salons and retailers), which are central to what we do at Cambridge BID. We are fortunate to have a good mix of independent stores alongside premier league multiples and visitor attractions plus a lively and eclectic night-time economy in our city. None of these elements stands on its own because a vibrant city relies on a rich and diverse mix of offer to attract visitors. As the Cambridge Independent survey revealed, 54% of respondents said a range of shops determined where they shop - and Cambridge certainly has this.

So what does Cambridge BID do to support our independents?For starters, many independents don’t pay into the BID levy if their rateable value is less than £30,000. In fact, the qualifying levy threshold was raised from £20,000 to £30,000 last April so that even more independents have benefited from not paying than in previous years.

However, irrespective of whether they pay a levy or not, these businesses still benefit from all of our projects.

Projects of key interest are:

The new Love Cambridge brand launches tomorrow (Thursday February 7) and aims to build a stronger identity for our independent stores.Certain cities have a reputation for a great independent retail offer - The Shambles in York or The Lanes in Brighton, for example. Well, Cambridge has its own historic core, its own lanes and we want the consumer at large to consider Cambridge as a great destination for independents. The new brand is a focus of this – something, as a city, we can get behind and create a story around.

Cambridge BID has launched an Advisory Group made up of key independent business owners in the city. Together, they have developed some core aims and objectives around promoting independents in the city. We have additionally set aside a dedicated Independents Fund which, over five years, will invest £100k a year in projects aimed specifically at independents.We are one of only a few BIDs in the UK to do this.

Putting independents on the map

We are looking to develop a dedicated independents’ map for independents to give out in their stores. We are also looking to engage with a social media/web consultant to run free 1-1 clinics for independents to ensure they are getting the most from an online presence. As the Cambridge Independent survey revealed, 66% of respondents said they were shopping more online - but are all our independent businesses online and do they have transactional websites? If they haven’t, they are missing out on a part of the market they are not serving. So it is vital we develop our digital support package to help get businesses online with transactional websites and ensure they are using tools like Facebook, Instagram, Google reviews, Twitter and Tripadvisor to their full potential. Working with Cambridge China Centre, we are also encouraging independents to learn more about this important group of visitors and accept the mobile payment systems they use like Alipay. 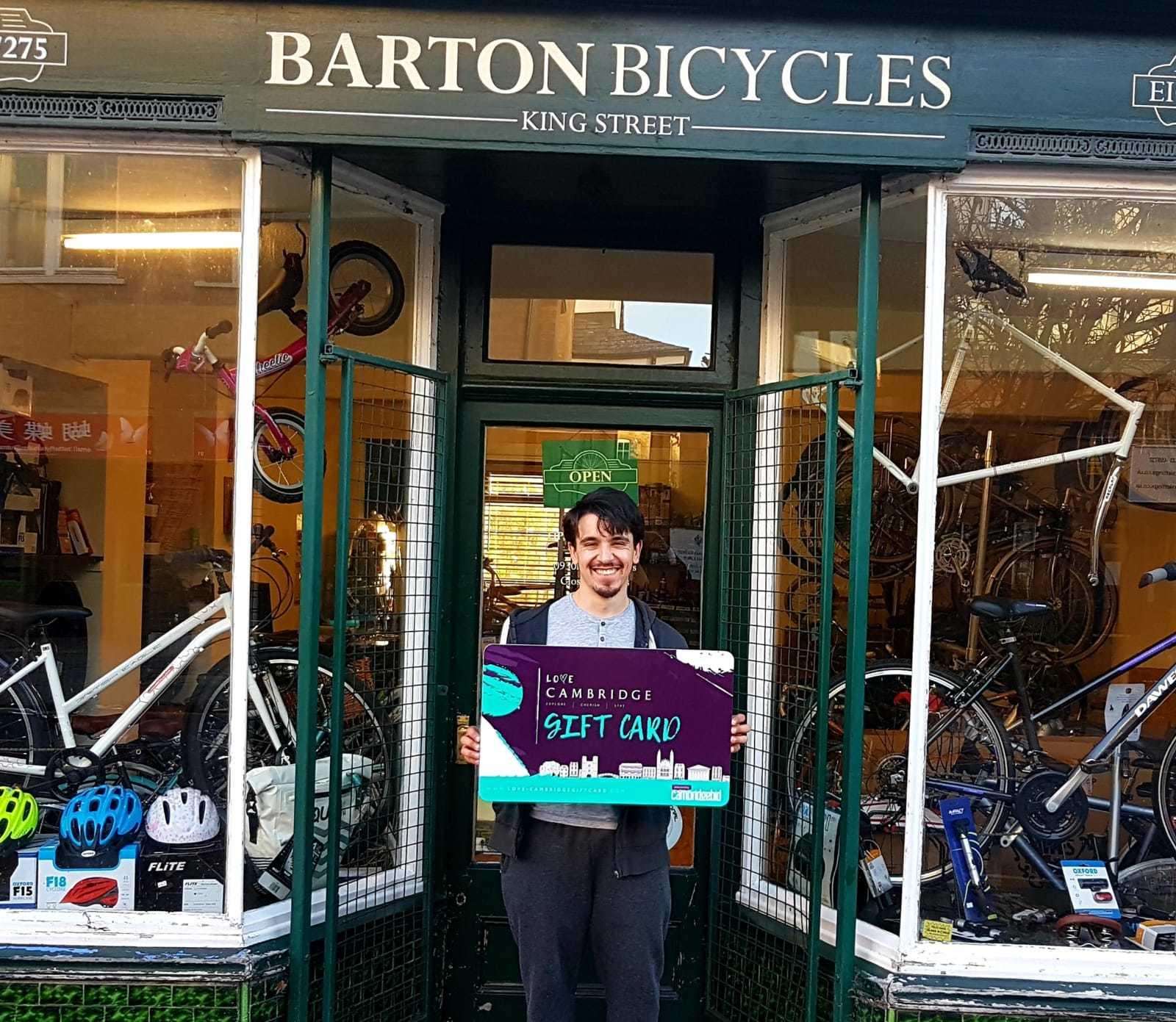 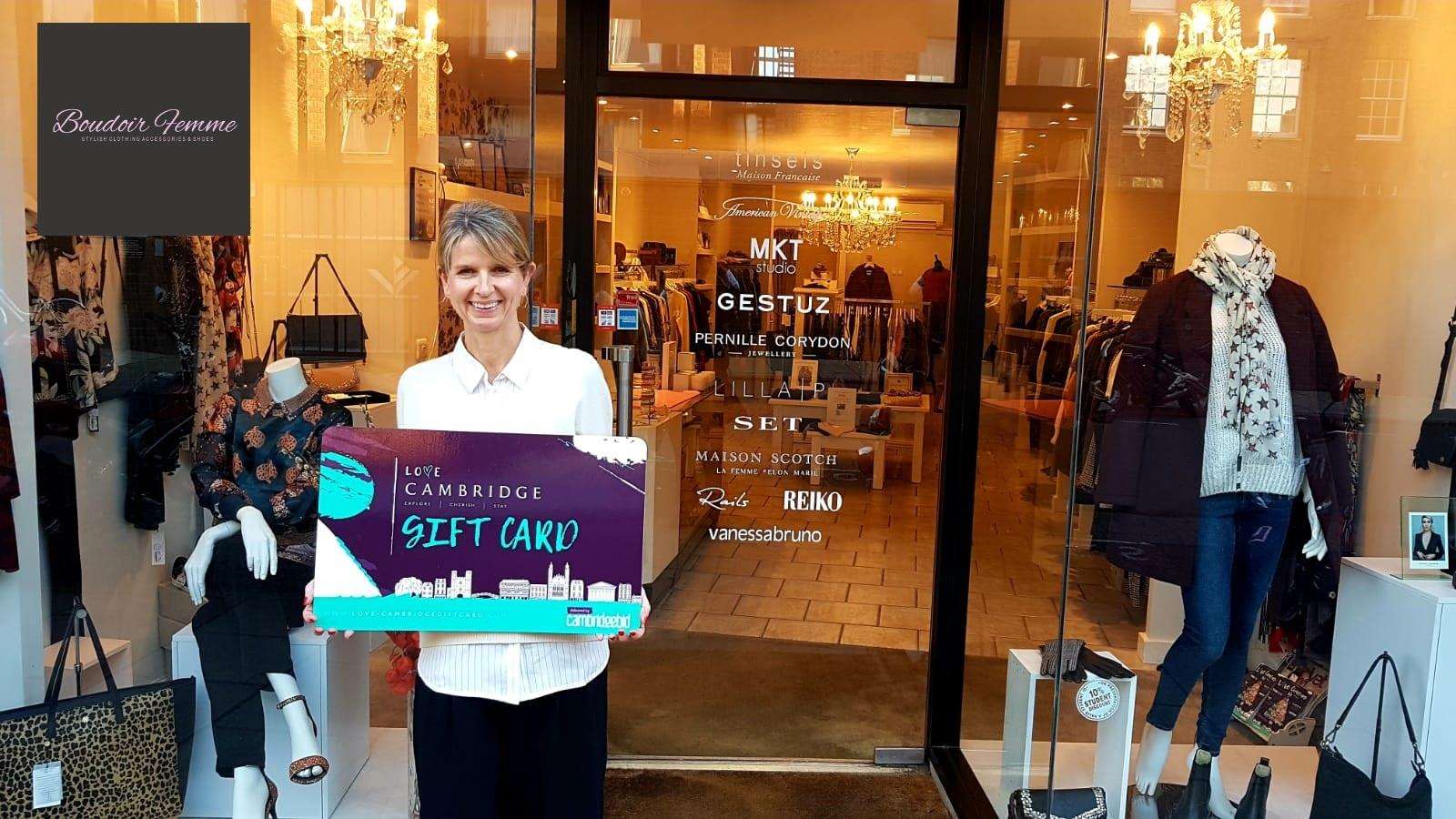 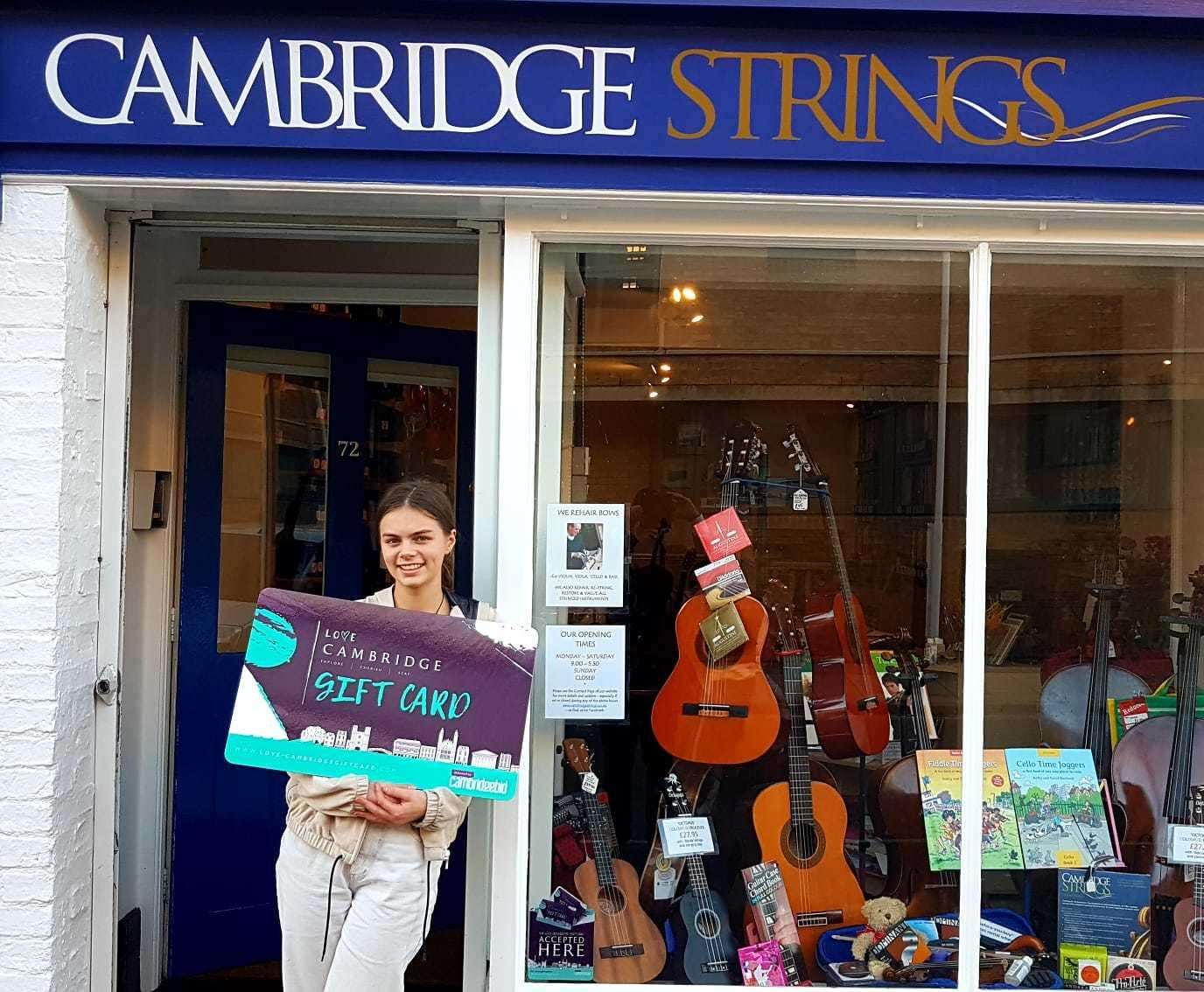 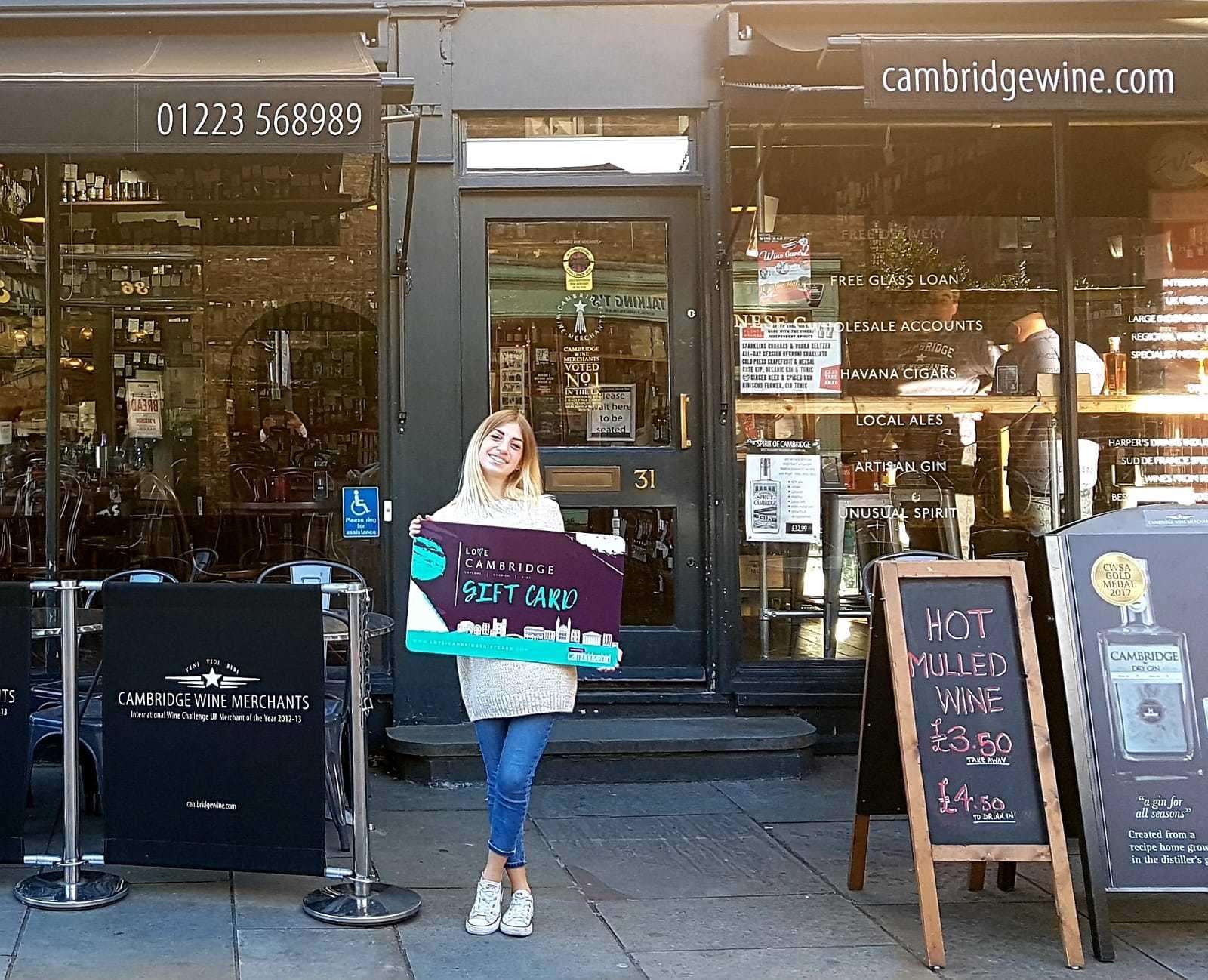 Our Love Cambridge gift card programme, which was launched last April, is of particular benefit to smaller independent stores that aren’t big enough to operate such schemes on their own.

The gift card is redeemable only at participating businesses within Cambridge’s BID area (the city centre and CB1 area) – and, because it can only be used in-store in person (not online), it benefits the local economy by ensuring the spend stays in Cambridge. Over 200 businesses have so far signed up to accept our card, and the list is still growing. Stats show that for every £1 spent with a local independent business, between 50p-70p circulates back into the local economy - so the positive impact and value that independent traders add to our community and local economy is proven.

This project is going very well. From August 2018 - January 2019, a period of just five months, sales of our gift card exceeded £32,000. In November and December alone, sales were in excess of £18,000 - and, to date, more than 880 transactions amounting to over £13,000 have been redeemed at over 70 participating businesses across a range of sectors.

Now in its seventh year, our highly successful Mystery Shopping programme is another key project for independents because national businesses tend to run their own mystery shopping programmes as a tool for staff development and training. If an independent business had to pay for this service, it would be quite expensive as it involves two mystery shops a year by an external supplier. Cambridge BID, however, provides this as a free-of-charge service and, as well as the two confidential performance reports, there is an Awards evening which businesses really value.

Our business cost reduction programme aims to help businesses become more sustainable by securing cheaper rates on energy, utilities, merchant fees and telecoms bills as well as pest control and other services. More than 90 per cent of the businesses benefiting from this programme are independents who lack the buying power and resources of national chains. Over the last six years, Cambridge BID has helped these businesses identify nearly £300k worth of savings, of which nearly £200k worth has been realised.

In addition to the above, Cambridge BID pays for all the Christmas lights in the city, additional street cleaning on over 50 streets, our 7-day-a-week Rapid Response cleaning service and the on-street Ambassador service that helps visitors navigate the city 363 days a year.

We recently launched Restaurant Week, a new project, for April, which many independent restaurants/cafes will be involved in.We also support the national Independents Day campaign in early July and promote Small Business Saturday every December.

Larger independents that do pay a levy also get discounts from other organisations in the city such as a 25 per cent discount (worth up to £125) on their Visit Cambridge membership and free CAMBAC membership (worth up to £600) if you have a CAMBAC radio.

As the high street faces continuing uncertainty and society looks to strengthen it community links, it is our independent businesses that can really set a city apart - and Cambridge has a great offer ably supported by Cambridge BID.