A new study shows the Cambridge economy has continued to grow impressively, fuelled by the life science and technology sectors, but a warning has been issued over the need for infrastructure investment to support it.

Extensive data – more detailed and more accurate than anything held by central government – has been by the business and academic membership organisation Cambridge Ahead.

It offers an unparalleled insight into the fortunes of the Cambridge and wider Cambridgeshire and Peterborough economies right up to the start of the first Covid-19 lockdown.

The research reveals a positive picture of employment growth over six years, which has been particularly strong among knowledge-intensive companies.

But this growth rate has slowed in the last three-year period, particularly in the latest financial year covered – 2019-20 – with some indications that start-ups and companies outside knowledge-intensive sectors may be finding conditions in the city less attractive.

Dan Thorp, of Cambridge Ahead, told the Cambridge Independent: “The data shows Cambridge continues to be an engine of high value job creation in an innovation economy, but it is not an engine that can be taken for granted.

“It does need attention, investment and intervention to ensure it can continue to play this nationally significant role and one that is to the benefit of local communities and the environment.”

The annual study, known as Cambridge Cluster Insights, was compiled by the Centre for Business Research at the University of Cambridge using data from company accounts and surveys, along with local insights direct from major employers like AstraZeneca and Aveva.

It identified 26,000 companies in a 20-mile radius of Cambridge, which employed 239,000 people and had a combined turnover of £48billion.

Of these companies, 5,372 (21 per cent) were in knowledge-intensive sectors – namely IT, life science and high-tech manufacturing.

A further 37,000 people were employed at university and research organisations in the area, which have also continued to grow.

The figures confirm Cambridge as one of the most important centres for knowledge-intensive employment in Europe.

Matthew Bullock, chair of Cambridge Ahead’s regional economic planning group and master emeritus of St Edmund’s College, Cambridge, has been monitoring the ‘Cambridge Phenomenon’ since it first emerged in the 1970s.

“The very first meeting of the Phenomenon was in the Eagle pub and I invited 19 people and we counted 36 technology companies in the Cambridge area, which was extraordinary,” he recalls.

“The growth story of Cambridge is a series of layers but the kernel is indigenous companies. Those companies formed and based here have grown unbelievably fast.”

The study shows corporate employment growth overall within 20 miles of central Cambridge was 6.2 per cent over six years, 5.0 per cent over three and 3.7 per cent over one year. These figures outperform the national economy significantly, but nonetheless indicate a slowing down in job creation.

The slowdown was less marked in knowledge-intensive sectors, however, which maintained strong growth of 5.5 per cent in 2019-20.

For Matthew, the data shows the city can be one of the “growth beacons” in the country’s economic recovery from Covid-19 – provided it is given the right support.

“The population of Cambridge has tolerated high rates of growth with a low level of infrastructure investment, and it’s not fair,” he said. “People will get cross about it. It wrecks their journey to work, their home, their air quality.

“Cambridge has a particular role in pulling the country out of the post-Covid problem and creating the science-based economy that ministers talk about, therefore they must put their money where their mouth is and put the infrastructure in.” 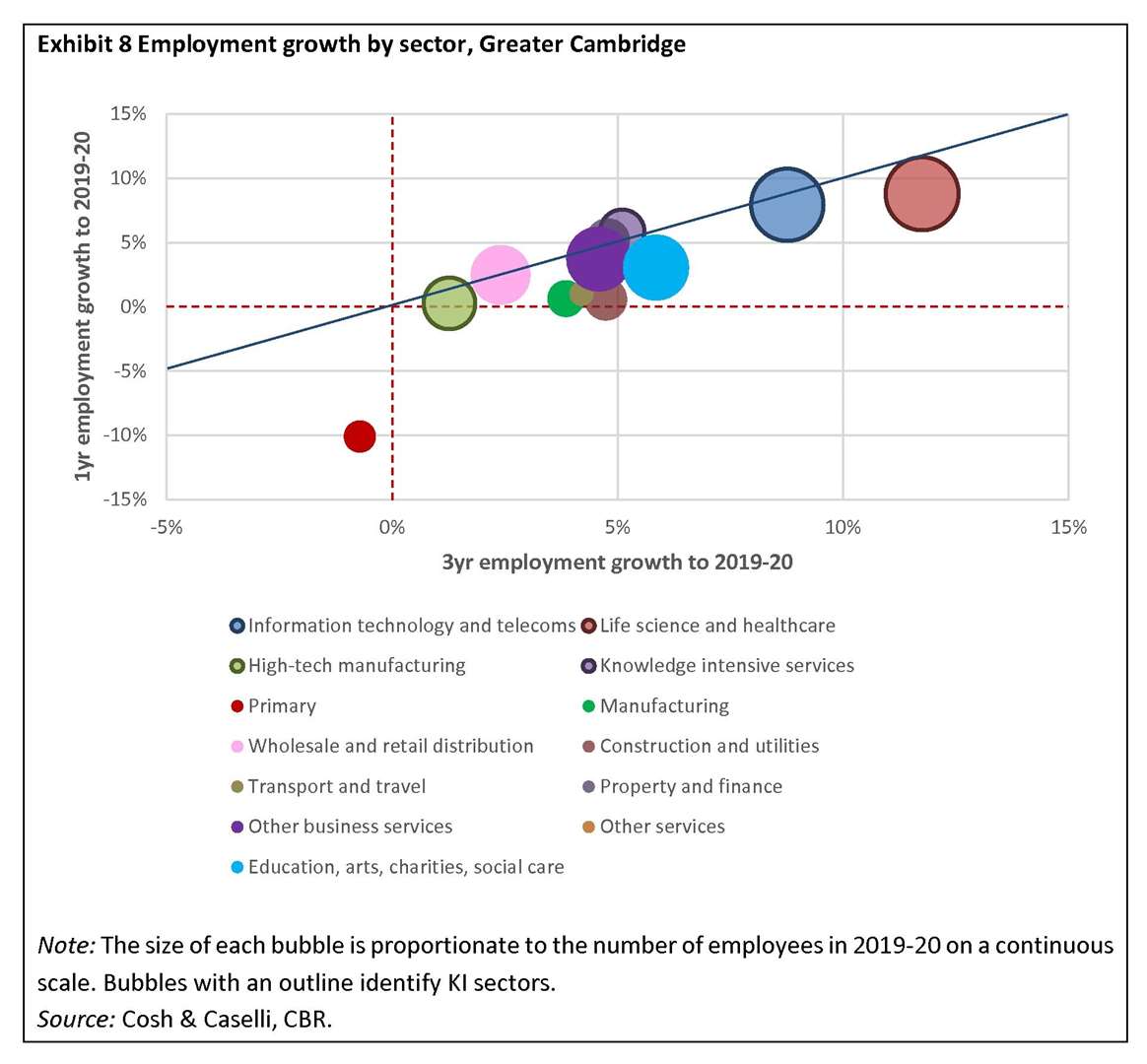 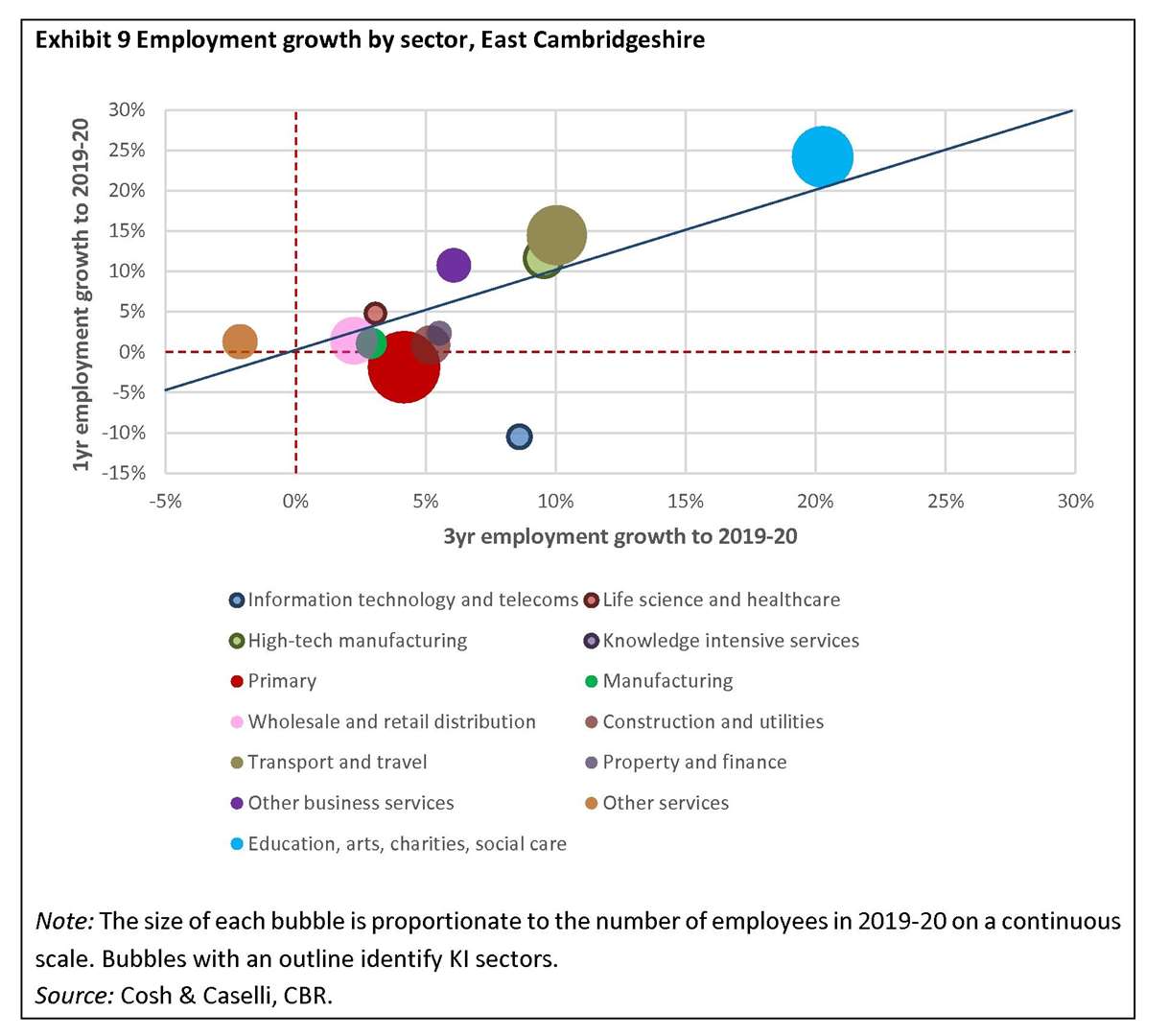 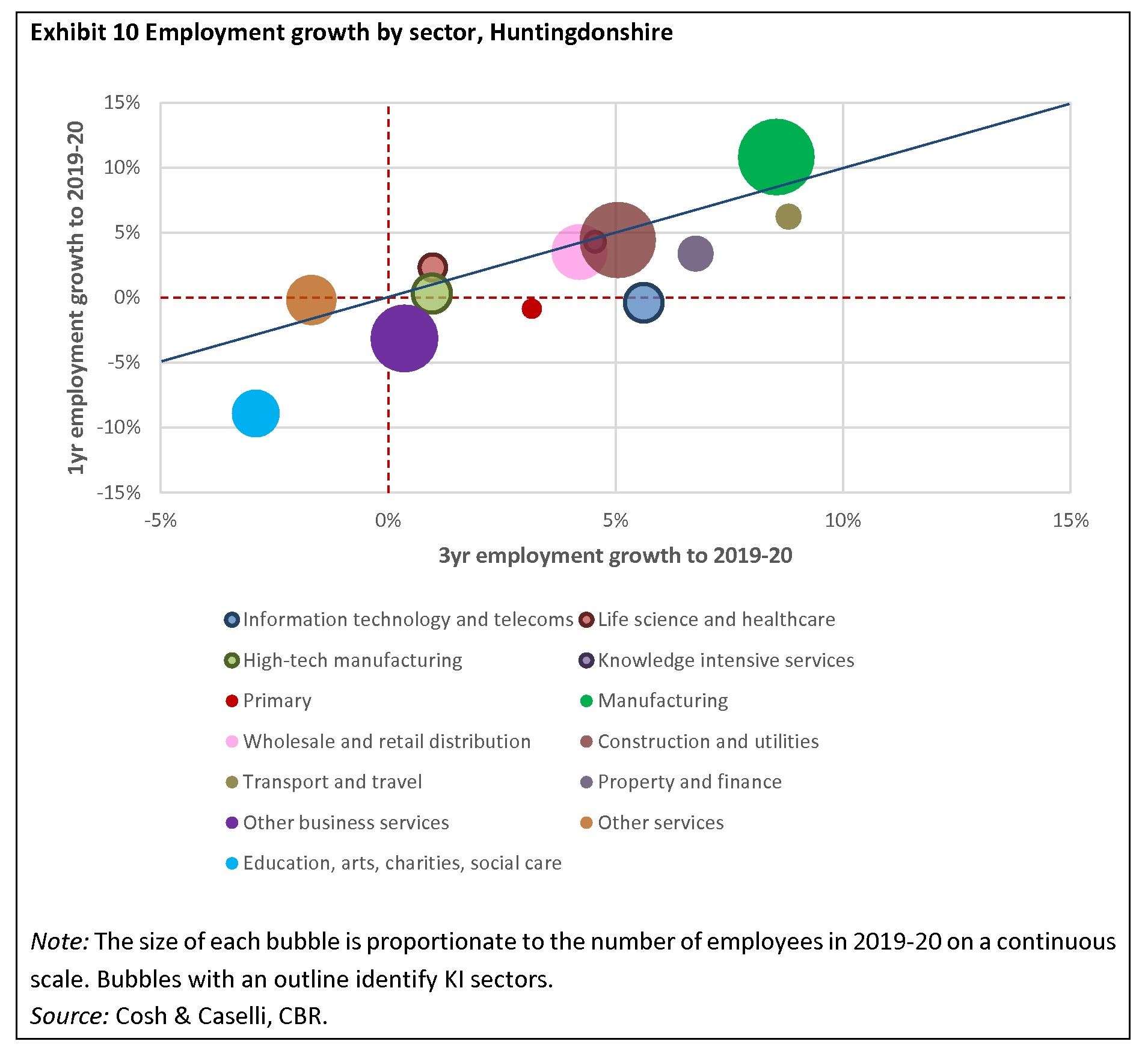 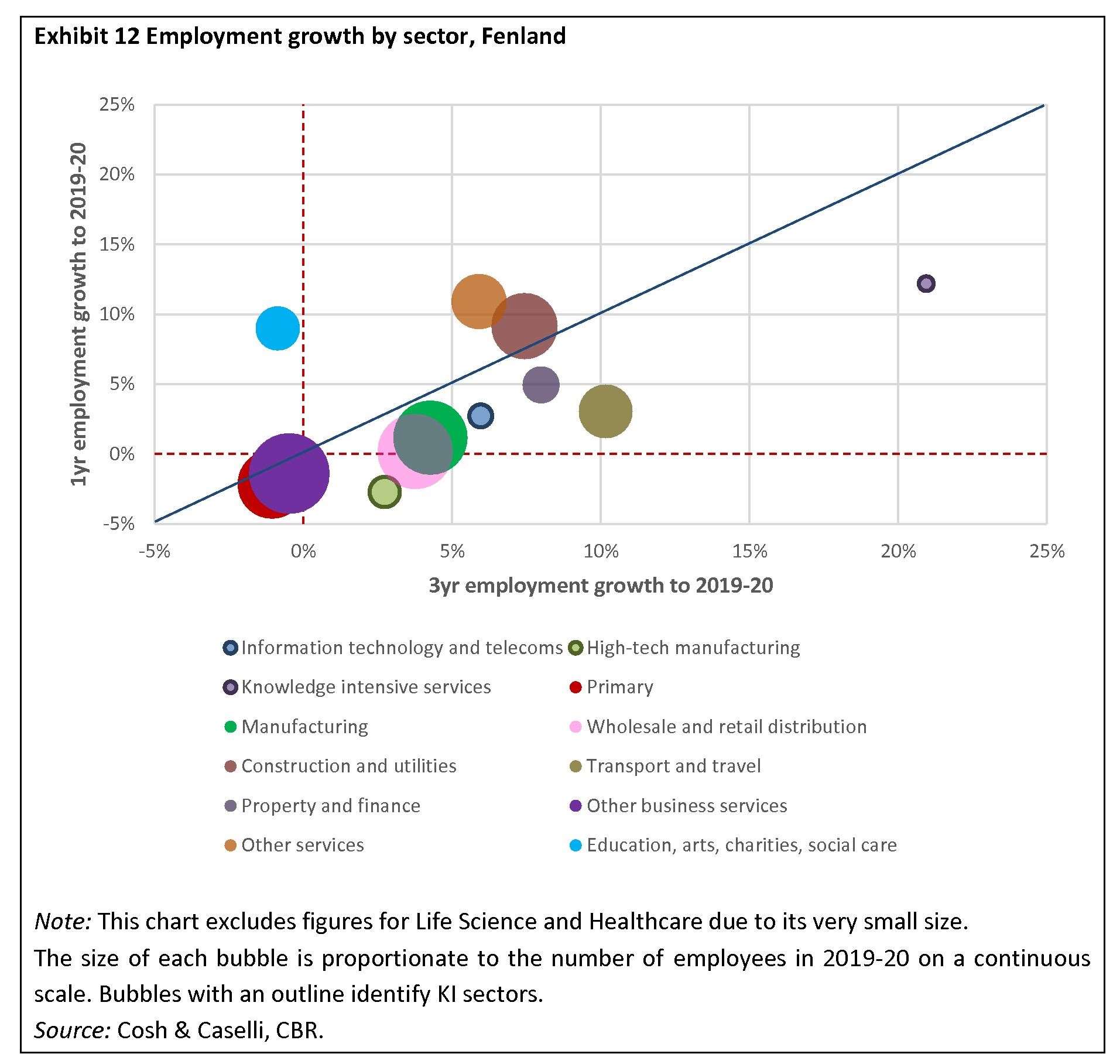 But Cambridge residents could counter that none of these projects have yet come to fruition – and in the meantime, house prices have become more unaffordable and congestion has worsened. The region also has some very fundamental infrastructure needs.

“Notably, in water,” says Matthew. “There are very clear plans being developed by the water companies for resolving the water problems that people are talking about and for preserving our chalk streams. They must be agreed by central government and the regulator and be solved. Secondly, electricity – the way that the electricity market works at the moment doesn’t cope with a high growth market.

“The Sanger Institute’s data centre is incredibly central for all the genomics work it does and consumes as much electricity as the city of Nottingham.

“We have this wonderful combination of life sciences and IT, but what if you’re suddenly in a position where you can’t turn on the switch…

“The government is keen for us to grow. The population will put up with this if you put in the infrastructure before and alongside development, not after.”

These thoughts echo warnings from the influential 2018 Cambridgeshire and Peterborough Independent Economic Review (CPIER), which called for investment and more devolved powers to ensure that the region continued to prosper.

It also warned that Brexit was a risk to Cambridge’s international economy – and this could be the primary reason for the slowdown in job creation seen in the new study.

“What we saw after the referendum is a number of companies saying we fear Brexit might have an impact on their future accounts,” says Dr Giorgio Caselli, from the Centre for Business Research, who conducted the research with colleague Dr Andy Cosh.

“It’s not possible to draw a direct causality, but it does provide signals that there may be an impact from Brexit,” adds Dan.

“And that is true of other things that the CPIER report talked about in 2018 as well, in terms of the potential issues facing the future of the Cambridge economy, like rising business costs. The overall levels of growth and job creation remain high but the trajectory has eased off slightly, and that provides warning signals that warrant close attention by local and national policy makers.”

While large companies in the region enjoyed the fastest growth in the last year (5.6 per cent), the number of start-ups did not exceed losses due to company closures, and there were also signs of companies moving out of Cambridge.

Initial analysis suggests this could be due to the rising costs of doing business in Cambridge.

Cambridge Ahead wants the annual research to be used to help guide policy and planning decisions for the region.

“Decision-makers need to take decisions that unlock the growth and job creation potential here, but balance that with social needs, like housing that isn’t unaffordable, and environmental needs and quality of life,” says Dan.

“By commissioning this, Cambridge Ahead wants to take an overview of the system in a way that wouldn’t be possible from national data. It allows for long-term strategic decision-making based on what is happening over the medium term.”

Matthews suggests this planning is critical to ensure the continued success of the Cambridge Phenomenon.

“This is a spring of companies bubbling up. It is not about companies coming from California,” he says.

“If you don’t plan for the right growth rate, you end up with higher house prices, higher rents, people living further away and commuting longer, so the underlying sizing is absolutely fundamental.”

East Cambridgeshire has shown striking employment growth in the period, partly a reflection of the natural expansion of the Cambridge economy and also an indication that high occupancy rates in the city are encouraging companies to set up shop further out.

“When we watched the very rapid growth of life sciences, it was very much in the east and south-east – a combination of the effect of the Babraham Research Campus, Sanger Institute, Addenbrooke’s, Chesterford Research Park and Granta Park, leading to massive growth in the quadrant from the A1301 to A1307,” says Matthew.

“We wondered why wasn’t the north growing? We had terrific growth around the Science Park and we now have the Cambridge Research Park growing. But the A10 has always been a lousy road.

“The pressure now is that people seem to be prepared to go up to Ely. With the railway and plans to dual the A10 to Ely, East Cambridgeshire is a better base.”

Other research by the centre, commissioned by Cambridge Ahead and Huntingdonshire District Council, suggests the north-west corridor along the upgraded A14 can expect similar growth.

“The key finding was evidence that the north-west Cambridge triangle was increasingly located along the main arteries – the A14, the A1301, and the A428, like Cambourne Business Park. The A1 is the limit in the west,” notes Giorgio.

“We can look at Cambourne Business Park as an exemplar because it has been able, over time, to attract a growing number of companies, mainly from the knowledge intensive sectors. It has

a good balance of people in the ICT sector and life sciences, particularly medtech.”

While growth in Huntingdonshire, Peterborough and Fenland was slower in 2019-20 than in the previous three years, it was still strong at two per cent – particularly given the demise of Thomas Cook, a major Peterborough employer.

“Employment growth across the Cambridgeshire and Peterborough area remains above average,” says Dan. “The Cambridge story is a compelling one, but the economic health of the wider region is another message within this.”

The government recently announced its ambitions to double economic output for the OxCam Arc with the aid of a co-ordinated strategy and new growth body across the five-county region.

The centre’s data – which was sponsored by Arm, Marshall and the Cambridgeshire and Peterborough Combined Authority – offers powerful evidence of the benefits of supporting this end of the Arc.

But the Arc project has led to concerns that these relatively rural areas will become developers’ playgrounds, deluged with a million new homes.

Matthew says: “You will concrete over it, if you don’t plan it. If you look at the pattern of where employment is growing, then you can say where it makes sense to have housing.”

The region is certainly on the frontline in that particular battle, not least due to West Sussex-based developer Thakeham’s highly controversial proposals for a massive new community of 25,000 homes in South West Cambridgeshire.

This data may yet prove a useful tool for the politicians and campaigners who argue those speculative plans represent an inappropriate development for the area.

The work, and associated cluster map at cambridgeahead.co.uk, also offer insight into how other areas could learn more about their economies and plan accordingly.

“Most other regions don’t actually know what’s going on in the ground,” suggests Matthew. “This work is available to government and is a methodology that others could use and, frankly, it shows you how to run a regional economy.”

Over to you, planners.

Thakeham ‘will not bypass’ Local Plan with its 25,000-home proposal for South West Cambridgeshire

Sign up for our weekly newsletter for more insight and analysis every Friday, direct to your inbox