Pavegen, the innovative Cambridge company that harvests energy and data from footsteps, has secured a cornerstone investment from engineering giant Hinduja Group.

It sought to complete its £5million fundraising with a £950,000 crowdfunding bid, launched on Crowcube on Tuesday, and secured the sum within a couple of hours.

The funding is designed to help Pavegen produce and sell higher volumes of its smart paving at a lower cost, while enabling the team to bring the technology to more cities across Asia, North America and the Middle East.

The Hinduja Group, a $50bn engineering conglomerate with co-chairmen who topped the UK 2019 Rich List, will work with Pavegen to cut manufacturing costs and provide access to fast-growing markets in India and South East Asia.

Laurence Kemball-Cook, CEO of Pavegen, was “blown away” by the response to the crowdfunding campaign.

“We’re helping people to change the world for the better, through the power of a footstep,” he said.

“Our product isn’t hidden away on roofs or offshore somewhere - people can physically participate in a smarter, more sustainable future. Working with the Hinduja Group will help us to make our technology available to more communities around the world.”

From its base at the Allia Future Business Centre in King’s Hedges Road, Pavegen is rethinking how smart cities and transport hubs operate, and how brands, retailers and educators interact with people..

Its smart walkways can convert footsteps into energy, data and rewards.

That is clever in itself, but Pavegen has taken the concept a step - or several - further.

And lighting or sounds can provide feedback for those walking across the paving.

Pavegen generated £1.8million in revenue in 2018 and has installations in 36 countries - including the UK, US, Hong Kong, India, Korea, Thailand and UAE.

For the latest example of one, head to Finsbury Avenue Square in London’s Broadgate this week, where until Friday a seven-square metre walkway is welcoming up to 60,000 people, whose footsteps are powering lighting and raising money for local homeless charity Providence Row.

“We believe the Hinduja team will be able to play a key role in enabling the Pavegen team to rapidly bring their ambitious vision to life.”

Pavegen signed a memorandum of understanding with global technology giant Siemens last year, detailing how they will develop smart city projects together.

The multinational is now connecting Pavegen walkways to its cloud-based operating system, allowing control and monitoring of its sites from any connected device.

An example of this can be found at the University of Birmingham’s redeveloped Edgbaston campus, where a 13 square metre Pavegen walkway has been installed permanently at the Green Heart. The array harvests the footsteps of up to 4,000 students and staff per day to power USB charging at nearby workbenches.

The walkway is being connected to Siemens’ MindSphere platform to enable its performance to be monitored from any device or location.

Kevin Worster, director of major projects for Siemens said: “We really see a synergy between Pavegen and Siemens, especially around the energy generation and data capture. So it works really well with our energy division and also with our IoT division. It’s great to see a British start-up partner with people like Siemens to really grow and show what they can do.”

For retailers, Pavegen can drive footfall - and then do something with it.

At Mercuy Mall, owned by Ellandi, in Romford, East London, Pavegen is converting footsteps into rewards for visitors.

In a global first for shopping centres, the entrance walkway is converting the kinetic energy of 60,000 customers footsteps a day into off-grid electricity to power services - and information about how much is being generated is relayed to visitors via overhead screens.

As a further incentive and thank you to those walking into the mall, customers can convert the energy into points for discounts and offers in the centre via The Mercury Smart

Mercury Mall also boasts solar panels, efficient heating and a zero waste to landfill policy - but uniquely the Pavegen system enables customers to engage physically with its eco-friendly initiatives. It has improved engagement by 15 per cent there.

Centre manager Spencer Hawken said: “The exciting thing about the walkway is that it gives our customers a chance to play their part in our sustainability story, simply by walking into the centre.”

In Bird Street, off London’s Oxford Street - the busiest shopping site in Europe - a 20 square metre array of of Pavegen’s V3 technology was installed in 2017.

Energy from footsteps is used to power bird sounds in the day and lighting at night, while app users can get rewards via the Tribal Planet Citizen Earth platform.

It is at the heart of what was called the ‘world’s first smart street’, which also features air-purifying benches and AirLite paint that removes NOx gases and bacteria.

Meanwhile, at Birmingham Airport, Pavegen was tasked with creating a game that would help occupy young travellers as they wait for flights.

The off-grid energy challenge invites players to compete to produce the most electrical energy through their footsteps, with progress displayed on LED light banks powered by their movement.

An eight-tile walkway has also been installed at Bloomington School in Indiana, USA, that powers educational boards and a phone-charging station.

Pavegen’s technology is also having an impact in Rio de Janeiro in Brazil.

Children running over a 200-tile football pitch in the deprived Morro de Mineira favela generates energy that is stored in batteries to power floodlights after sunset.

With crowdfunding under way, and support from Hinduja Group, Pavegen’s ingenuity is set to be felt more widely still.

From the US to the Middle East

A big moment in the rise of Pavegen came on November 18, 2016, when the company's first large-scale outdoor installation in a a US city was launched.

Some 240 square feet of tiles were installed in Connecticut Avenue, not far from the White House, in Washington DC, and convert the energy from the footsteps of 10,000 people walking over them into renewable power for the local grid. 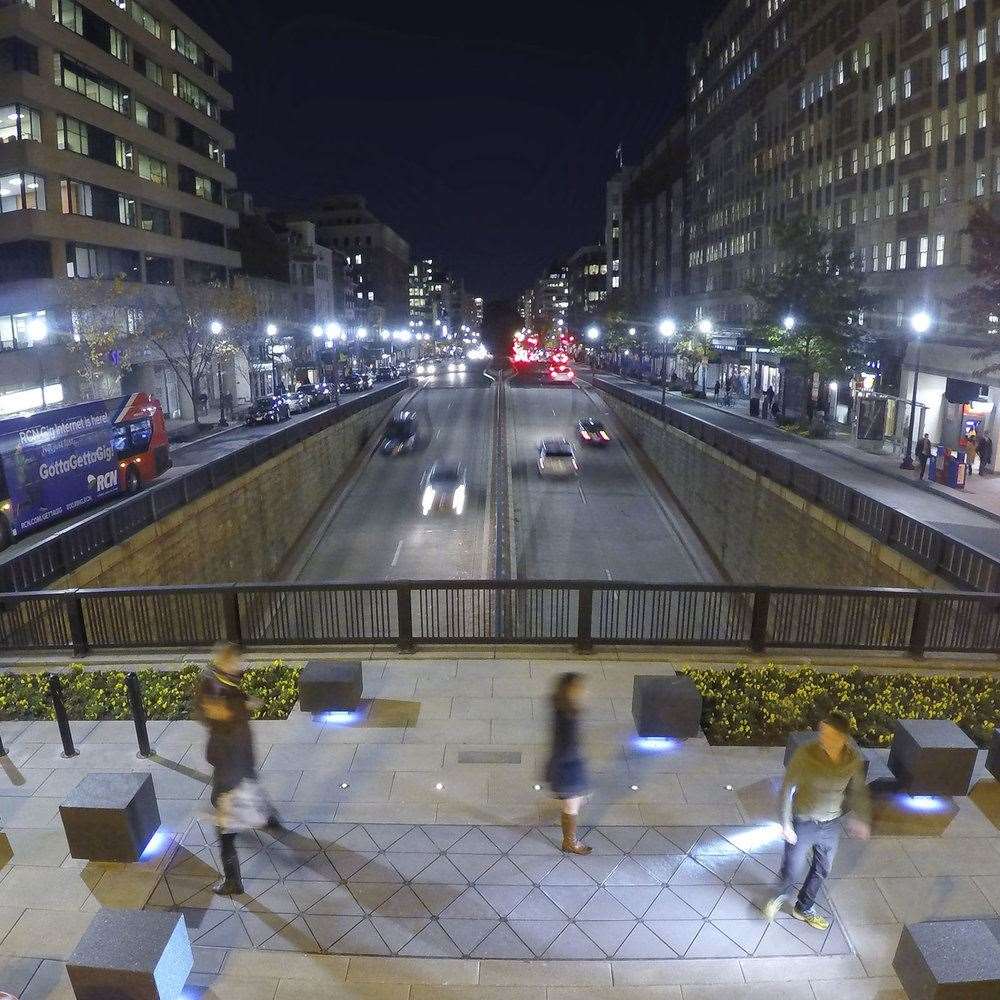 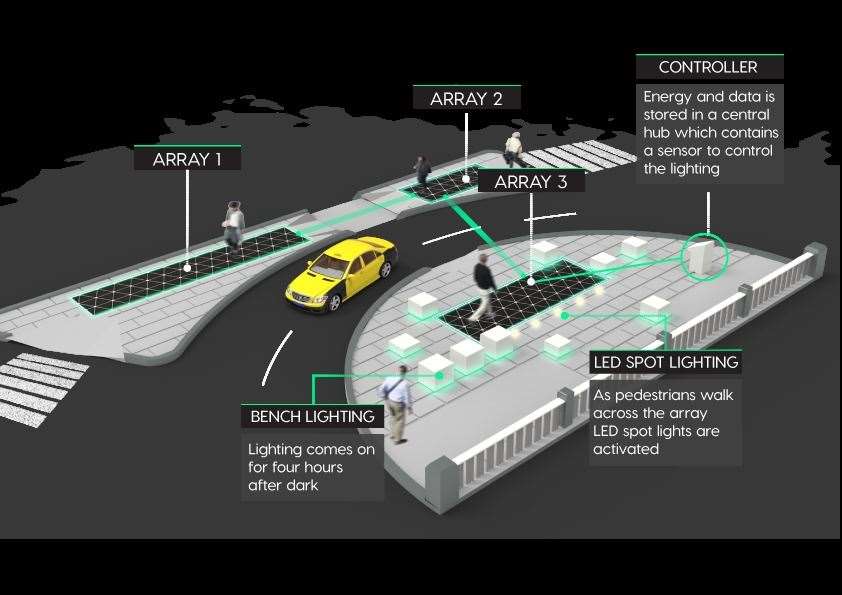 It hasn't looked back since.

In December 2018, Abu Dhabi International Airport became the first in the Middle East to introduce an energy-harvesting walkway, when Pavegen installed a 16 square metre path, information screens and a game for young travellers.