Searching for a rare silhouette during a trip to Breckland

At last there are signs of spring after the wettest February on record. Time, I decided, to sample the delights of the sandy heaths and forests of nearby Breckland to see what is stirring as the days lengthen and buds start opening.

Lynford Arboretum in the heart of Breckland offers delightful walks through groves of native and exotic trees and is a great place to get good views of a variety of birds, including some that are not often seen, notably the very elusive hawfinch. Daffodils graced the grassy turf beneath the oaks, larches and evergreen trees, while nuthatches called, chaffinches and robins sang and the melancholy fluting of a mistle thrush could be heard in the distance.

A short walk took us to an area with bird feeders, surrounded by bushes and scrub. So often is this spot supplied with seeds that it has become a regular feeding station for a range of birds and allows close views. Here we watched great, blue, coal, marsh and long-tailed tits, along with nuthatch, dunnock and robin, as well as chaffinches and their rarer relative the brambling. High up in the branches of nearby tall larch trees, small flocks of goldfinches and siskins worked the cones to extract the nutritious seeds.

Further along, the track crosses a stream that feeds a lake, from which a loud trilling call from the reeds revealed the presence of a little grebe lustily establishing its breeding territory. The track then continues past a flooded meadow towards a grazed pasture where we stopped for a while. Our main aim here was to try and find a hawfinch. After scanning the trees and grassland we eventually spotted a group of these strange dumpy, big-billed finches, feeding on the meadow grazed by highland cattle beneath ancient trees of lime and hornbeam alongside jackdaws and mistle thrushes. Hawfinches are our largest finches, measuring 18cm with plump almost parrot-like bodies, and a massive, powerful bill. They prefer mature woodland, especially if there are hornbeams whose seeds they eat, along with those of beech, and they can even crack open cherry stones. 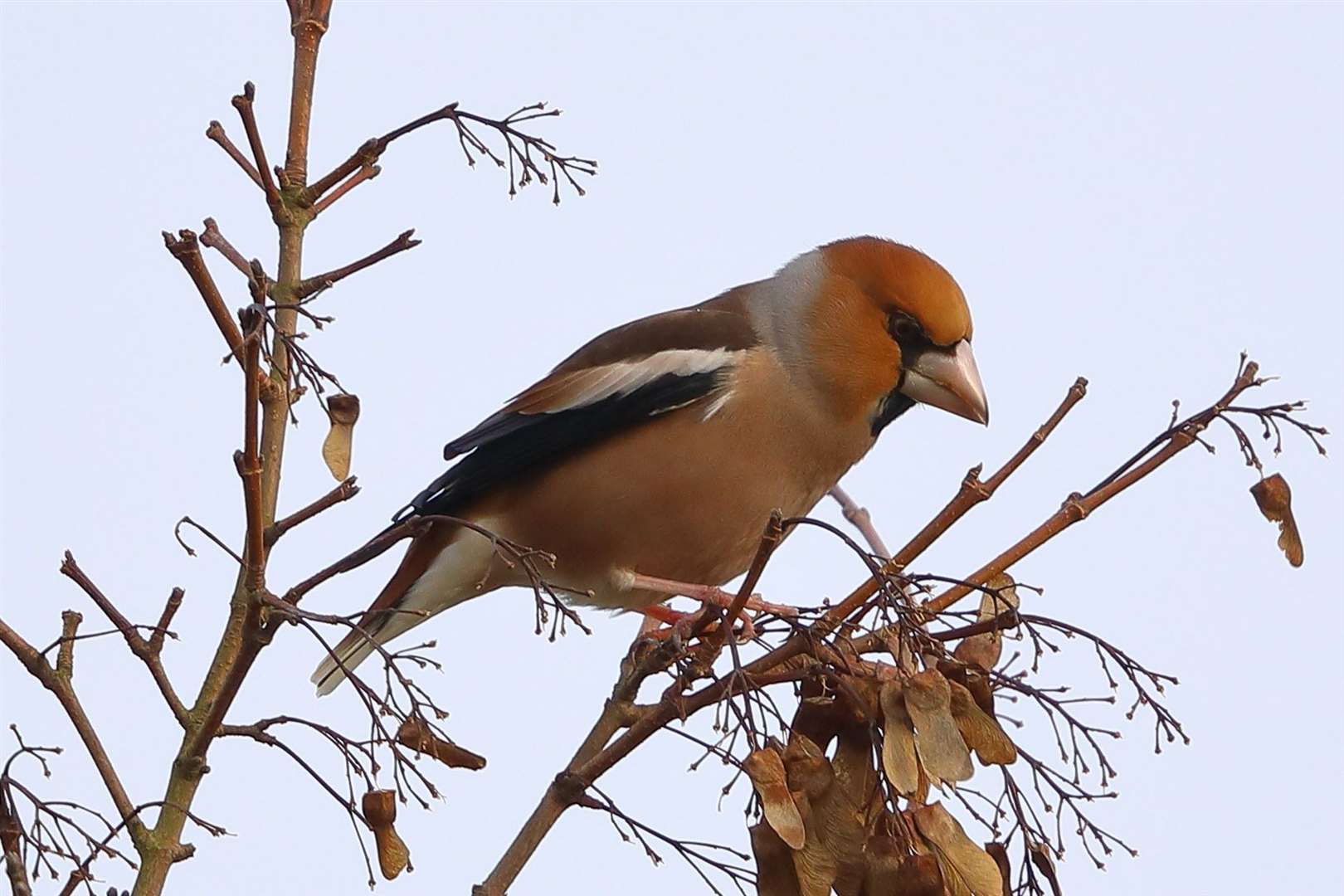 Birds of prey were much in evidence too in the slowly warming spring air. Kestrels glided and hovered over the fields or perched on roadside trees. When hovering, a kestrel keeps its head, and therefore its eyes, completely still while the rest of its body adjusts to the buffeting of the wind, so it can scan the ground for small mammal prey. Its eyes can also detect the UV light emitted by the urine trails left by voles and mice! Sparrowhawks and buzzards soared and circled above the woods and forests, and we also saw a couple of red kites. But there was another raptor we hoped to see at a nearby location, a species until recently almost unknown in the country.

Serenaded by skylarks we scoured the skyline searching for silhouettes. Buzzards cruised constantly over the plantations and a passing peregrine created a ripple of excitement, but still no sign of our target bird. Then after several minutes we finally saw one. The goshawk soared conveniently close to one of the buzzards, allowing helpful comparison of size, the goshawk being almost as large, so no sparrowhawk this time! While buzzards usually hold their wings in a very shallow V, the goshawk glided with wings held flat. Another key character is provided by the white lower tail coverts, at times looking almost like a pair of fluffy shorts. Goshawks are very powerful hunters, well capable of tackling large prey such as pigeons and crows and even mammals including squirrels and rabbits. In Breckland, studies have shown that grey squirrels and woodpigeons are its favoured prey, so gamekeepers should not worry, though they also take the odd pheasant or partridge, a small price to pay for such a magnificent hunter. With a UK breeding population of only around 400 pairs (though probably underestimated) the goshawk remains a rarity here, though it is slowly increasing, and it is commoner in most of central and northern Europe. In Berlin for example goshawks have even established themselves in the city, with its numerous parks and gardens, so perhaps the same may happen here, as has already occurred with sparrowhawks and peregrines.

My thanks to local photographer Neil Bramwell for the use of his images.