On a sunny day in April Cambridge sprung to life. The ring roads were rammed. The streets are packed. The outdoor tables were so full crowds spill over into any available green space. Where does everyone come from? Tourists pop up like snails after rain. People congregate. On Parker’s Piece there was football and activism.

The day’s proceedings kick off with a Green New Deal appeal from the city’s school strikers, who link employment opportunities to a new sustainable economic framework.

“The nation is in a very turbulent situation,” says Junayd Islam, a member of Cambridge Schools Eco-Council. “We are at a crossroads – do you want to go backwards or will take a bold step forward? We can tackle the climate crisis and the unemployment crisis at the same time if we get a green new deal. Green solutions don’t have to be expensive, they just have to be well thought out.”

Nico Roman, deputy chair for the Council, adds: “We would like to support green new internships as they would help people make up their minds about what to do in the future.”

An older woman pops up to take the microphone. She is Jannie Brightman, who joined the civil rights movements in the US in her teens.

“What an inspiration the eco-council is,” she says. “And what’s so wonderful for those of us in our second childhood is that you are the hope, you are the future, and we will support you any way we can.”

Big applause from those gathered on the Piece. The green new deal campaigners then gave way to the Movement Against Racism campaigners, the Cambridge-based group which formed out of Black Lives Matter last year, who led the march from Parker’s Piece into town. Around 150 people went via St Andrew’s Street and Trinity Street into King’s Parade. The streets were packed as shoppers enjoyed a rare day of sunshine and warmth. The atmosphere was good-natured.

Around one-tenth of those in the city centre today were wearing masks, in what amounts to a show of confidence that the UK’s very successful vaccine roll-out has temporarily neutralised the invisible enemy. There wasn’t much social distancing possible for either the marchers or the throngs of shoppers at various points along the route.

The Movement Against Racism speakers took their turns at the microphone on King’s Parade, scene of so many activist demonstrations in the last two years.

“I started Movement Against Racism a couple of years ago,” said Safiya Mawusi, one of the organisers, “and it’s almost incredible to be standing here again, but there has been change, does anyone know what the verdict was for the Derek Chauvin trial this week?”

“We still have a lot of work to do,” continued Safiya. “We have to keep coming out here if we still want change. Rosa Parks refused to get off her seat, but it wasn’t ‘boom’ we suddenly had all those rights, no. We need consistency, we’re still marching, we’re still talking, we’re still educating. The Black Lives Matter movement affects everyone. An injustice for one of us is an injustice for all of us.”

Further speakers shared their experience of racism in practice. One woman working at a children’s home in Suffolk was told she wasn’t ‘resilient enough’ when she objected to racist abuse in her workplace. The next speaker, a white woman, said: “If you’re white and you’re queer you need to get out there because you owe your rights to people of colour.”

One of the chants of the day went: 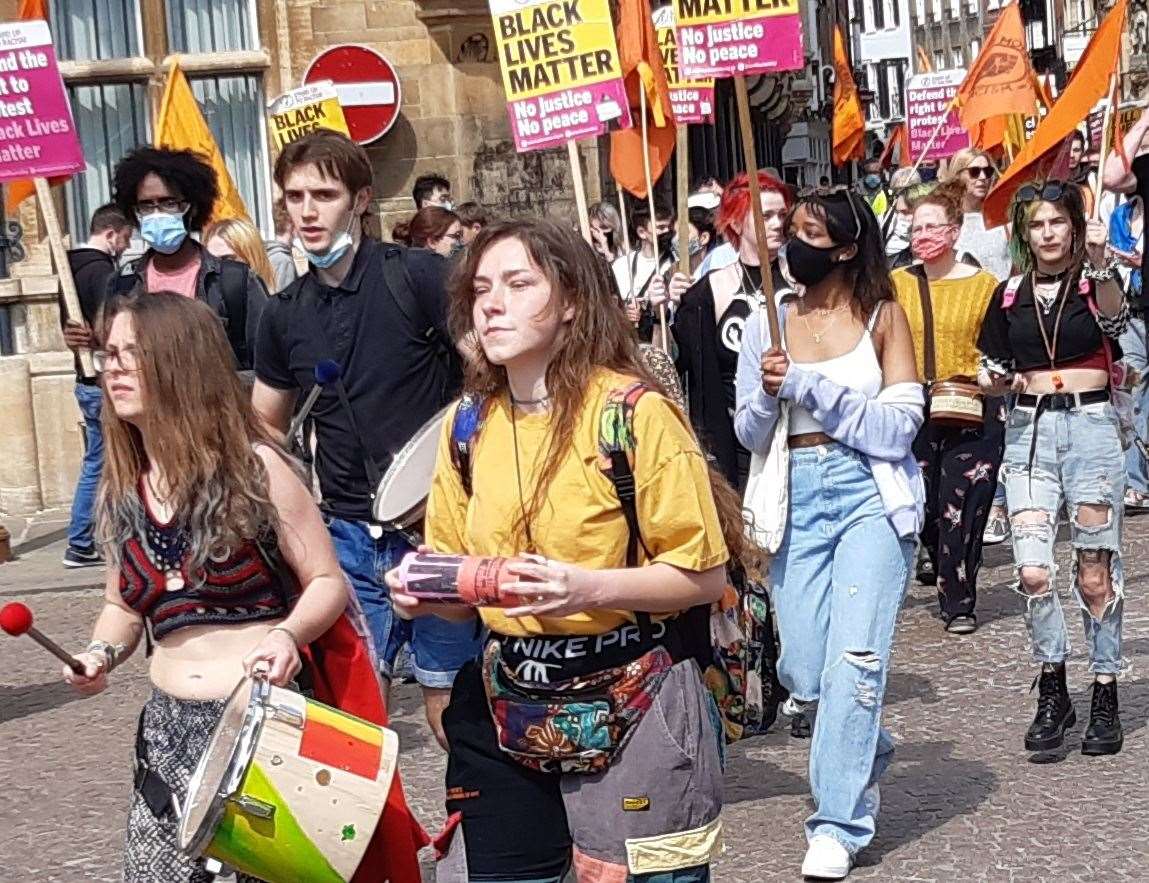 There were several references during the afternoon to Stephen Lawrence, who was murdered in a racially motivated attack in south-east London on April 22, 1993. Breonna Taylor was killed by US police in her own home in Louisville, Kentucky, during a botched police raid on March 13, 2020.

There was also concern about the prospect of further powers being given to the police – “police forces around the world have their origins in suppression and maintaining the status quo”, said another speaker – and the recent report in racism in the UK. The 258-page analysis by the Commission on Race and Ethnic Disparities was described by the UN as “an attempt to normalise white supremacy”.

The next speaker delivered a speech on his lived experience that captivated protesters’ attention. He said that when he first arrived in London from Burkina Faso, he was shocked.

“When I got here I realised a lot of the black people did not know their [African] names. The racism is so deep that in different parts of Tottenham we’ve been taught to hate each other. God bless everyone who’s come here today. Racism is so deep it’s going to take years to overcome.”

Safiya Mawusi has also lived in London, while going to school in Cambridge. One of her close friends was stabbed and killed in the capital. She described the effect on families of the father being sent to prison.

“The children are growing up, and the son feels he has to provide, so he starts selling drugs. It’s so difficult to get away from that cycle but what I want to say this is not because the system is broken – the system is deigned to work that way. We’re not here to fix the system, we’re here to get rid of it and you are the change, and we’re going to throw that system out.”

The biggest cheer of the day went up for that.

Movement Against Racism organises monthly marches: the May march will be the first anniversary of the murder of George Floyd on a Minneapolis street, which set off a storm of protests in the US and across the world.