Cambridge commemorates Nakba Day amid turmoil in Israel and Gaza

A march took place in Cambridge today (May 16) for Nakba Day, the 73rd commemoration of events in Palestine leading up to the creation of the state of Israel in 1948.

Nakba Day is the day when more than 500 villages and towns in Palestine were destroyed in 1948, triggering the displacement of 750,000 Palestinians from their homes. ‘Nakba’ is the Arabic word for ‘catastrophe’ or ‘disaster’ .

With an estimated 150,000 attending a similar event in the capital, around 300 people gathered in market square at 11.30am. One, who identified herself as Miriam, said: “I’m because I feel so helpless when I watch the news of the events taking place in Israel and in Gaza, it’s just horrific. The only positive news this week has been the Italian dockers who stopped an arms shipment destined for Israel in solidarity with the Palestinians.”

Averil Parkinson, chair of the Cambridge branch of the Palestine Solidarity Campaign (PSC), was on a stall outside the Guildhall.

“We were coming here every week, though that has been interrupted because of Covid,” she said. “But because of what’s happening in Palestine now, there has been an enormous rush of interest and concern. This event has been organised with the PSC and Stop the War. We expected half a dozen people – it’s a rainy day – so this is pretty impressive.”

The gathering proceeded to march down Sidney Street, along All Saints Passage and into Trinity Street and then King’s Parade, with the chants including “73 years of occupation/Free free free Palestine” and “In our thousands/In our millions/We are all Palestinians”.

“We held a protest in the week,” he said, “and I sent a video to a friend in Gaza. She was so happy at the solidarity being expressed, she said it was the worst shelling they’ve ever had, the whole family are terrified. These people are effectively living in a concentration camp, it’s like an open prison, with no food coming in, but these people are strong and resilient and we will always love them.”

The second speaker suggested three issues that have led to the mayhem which has caused the deaths of 139 Palestinians on the Gaza Strip, including 55 women and children, to date, with seven Israelis killed following the firing of hundreds of rockets from Palestine into Israel.

“In Sheikh Jarrah in East Jerusalem, where families are being thrown out of their homes, the Al-Aqsa Mosque attack on a sacred night – imagine if they came into the church here with tear gas at Easter – and the blockade of Gaza, where food coming in is limited, and even if you are dying of cancer they won’t let you out.”

Subsequent speakers in the next hour referred to the events in 1948 – which saw the end of the British mandate in Palestine and the creation of the state of Israel – a 2017 UN agency report which concluded that ‘Israel has established an apartheid regime that dominates the Palestinian people as a whole’, and the low rates of vaccination against coronavirus in the region, where an Israeli is 60 times more likely to have received a jab than a Palestinian, according to Medecins Sans Frontières.

The methods used by Israeli forces in the Gaza Strip were described by one of the speakers. Allegedly “one missile hits the building but causes only 10 per cent damage, then the occupants have 15 minutes to evacuate the house before the F16 warplanes come in”.

There was distress on display.

“People in Palestine would be so happy to see you,” said another speaker, who identified as a PhD student at the University of Cambridge, outside the church. “They rely on people like you. This is not a conflict, it’s not a clash, it’s a genocide.”

“This bloodshed has to stop,” said the recently re-elected councillor for Romsey, Dave Baigent.

A female speaker from Cambridge Lockon said: “The other evening at the Lockon a Palestinian, a Kurdish and a Jewish woman were all sitting down together, and that’s what they’re scared of isn’t it?”

“A report by Robert Piper, the UN coordinator, said that ‘the unlivability threshold was passed a long time ago’ in Gaza.” 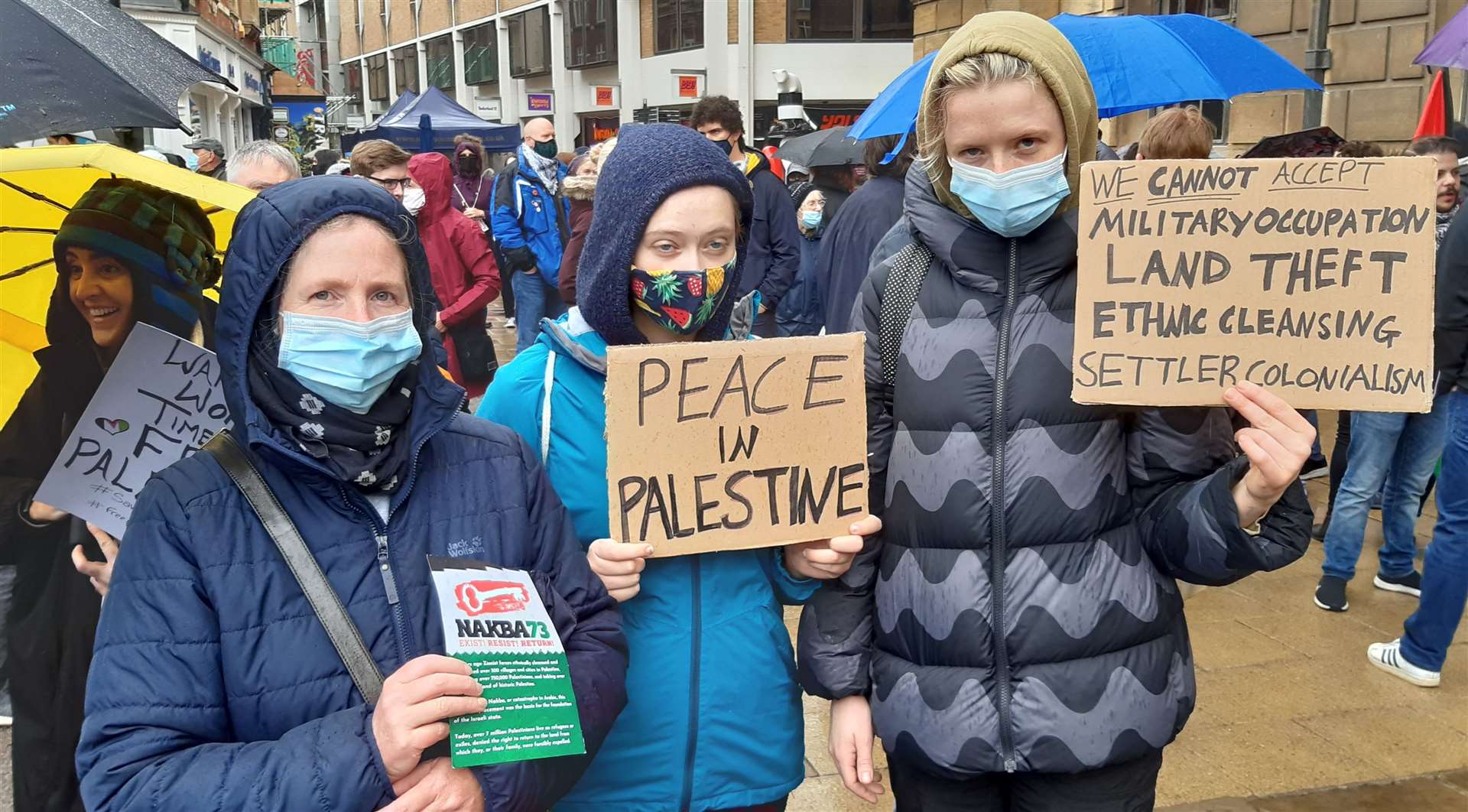 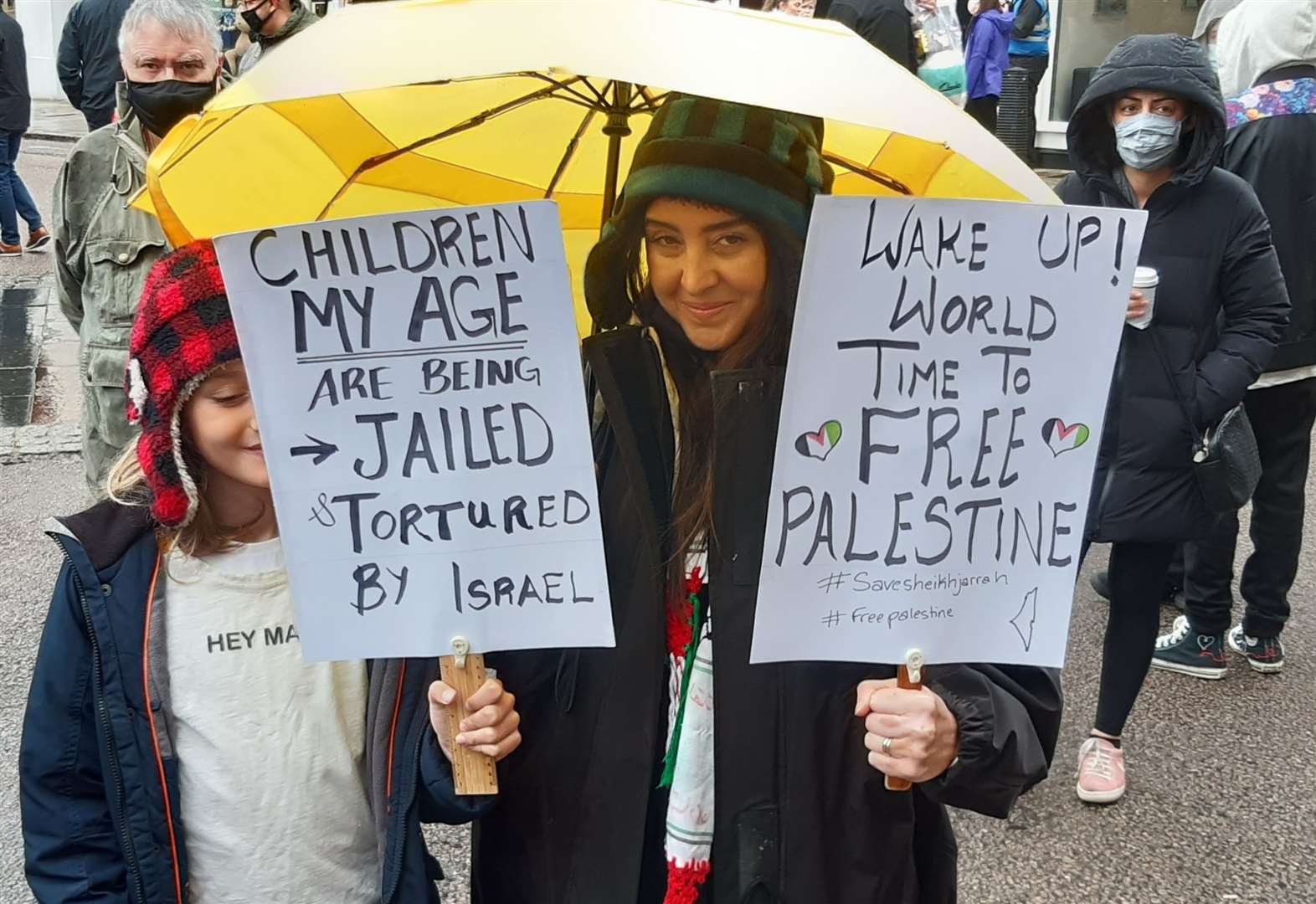 A spokesperson for the Cambridge Palestine Solidarity Campaign concluded: “We campaign to raise public awareness of the long-term extreme injustices inflicted on Palestinians, and in normal times also sell Fair Trade Palestinian produce.

“Cambridge Palestine Solidarity Campaign were here today with our stall, the plan initially being to commemorate #Nakba73, 73 years since the first major ethnic cleansing of Palestinians from their homes and lands, noting that it continues to this day, for example the expulsions in Sheikh Jarrah which precipitated the current crisis.

“The rapid escalation to the horrific bombardment of Gaza, yet again, has shocked and disgusted so many people that they have turned out in huge numbers, in London reportedly 150,000 marched to the Israeli Embassy. We had no idea how many would come in Cambridge, but in conjunction with Cambridge Stop the War we drew around 300 people, who marched through the town before some excellent speeches.”

The event, which passed off without any public order incidents, concluded at 2pm. The Israeli Embassy was approached for a statement.