Organisers of the Cambridgeshire Keep our NHS Public event yesterday (July 3) criticised Facebook for blocking accounts posting updates on the national fair pay protests which took place across the UK, including on Christ’s Pieces in the centre of Cambridge.

The vigils, speeches and protests took place on the 73rd anniversary of the NHS, celebrating the launch of the world-renowned national health service on July 5, 1948, while simultaneously “raising the alarm to its dismantling and sell-off by this government”.

At 11am Cambridgeshire Keep our NHS Public group joined nationwide protests for patient safety, pay justice for health workers and an end to privatisation, with NHS supporters displaying homemade quilts on Christ’s Pieces. An open mic session for supporters saw speakers put the case for a significantly higher pay offer than the 1 per cent so far made by the government, as well as raising the alarm about ‘privatisation by stealth’. A stall displayed information on the threats to the NHS locally and how to opt out of the ‘data grab’, which could see patients’ GP data sold for profit.

Cambridgeshire Keep Our NHS Public group was joined by doctors and healthcare workers, trade unionists, the Cambridge People’s Assembly and other local groups.

She said: “I’m a doctor and researcher of kidney transplantation. In the US, if you don’t have health insurance, you only receive three years of anti-rejection medication. After that, people have to pay for it themselves. The system means that health outcomes are poor. We need to resist any kind of insurance-based or tiered system here in the UK – everyone deserves excellent healthcare no matter how much they earn.

“Privatisation of the NHS is happening without the public being aware of it – not via a wholesale transfer, but of a process of hollowing out the service by transferring NHS services to private sector contracts. When this doesn’t go to plan – such as locally when Circle Health realised in 2015 they couldn’t make a profit after taking over Hinchingbrooke Hospital and swiftly exited the agreement they had made – then the NHS is left to pick up the pieces. I am terrified of the possibility that we end up with either fully privatised healthcare, or tiers of healthcare dependent on income here in the UK.

“I strongly believe that nobody should ever be denied healthcare because they can’t afford it, and encourage everyone to campaign against privatisation of our healthcare system here in the UK.”

Another speaker, Jannie Brightman from Cambridge KONP (Keep Our NHS Public), talked about the privatised US healthcare system, the model apparently preferred by the current government, and described the number of deaths and bankruptcies that a system based on profits causes – including her oldest friend who died in the US “because she had to delay treatment until she could purchase health insurance”.

She said: “This government wanted us to clap and not criticise its criminal response to the pandemic. They want us to think of nurses as angels not as workers. They offered nurses a 1 per cent pay rise instead of the 15 per cent they deserve. Now they want to silence them. Today we celebrated the 73rd anniversary of our NHS and protested the lack of investment, pay justice and called for an end to privatisation. We will not be silent. We send solidarity to the nurses. Healthcare for all should be a human right.”

Two beautiful quilts, sewn to record people’s reflections on their Covid experience and their feelings about the NHS, were displayed alongside local Keep Our NHS Public banners and slogans, protesting for patient safety, pay justice for staff and an end to privatisation. Crowds of people passing through Christ’s Pieces were attracted to view these and listen to open mic talks from local people, including patients, a doctor and a student nurse. 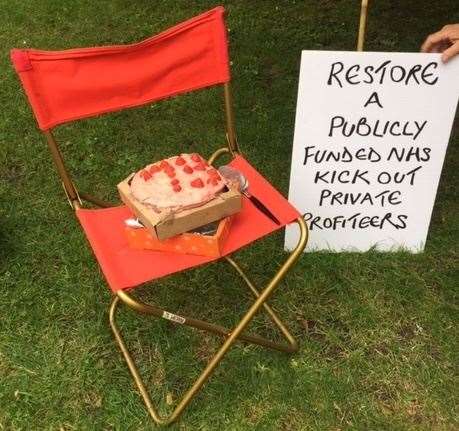 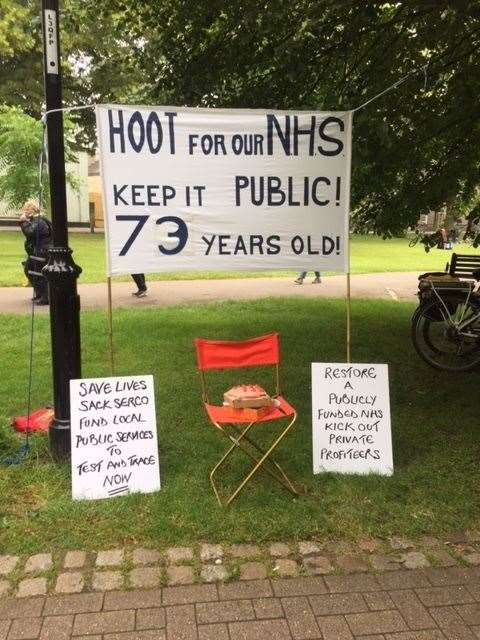 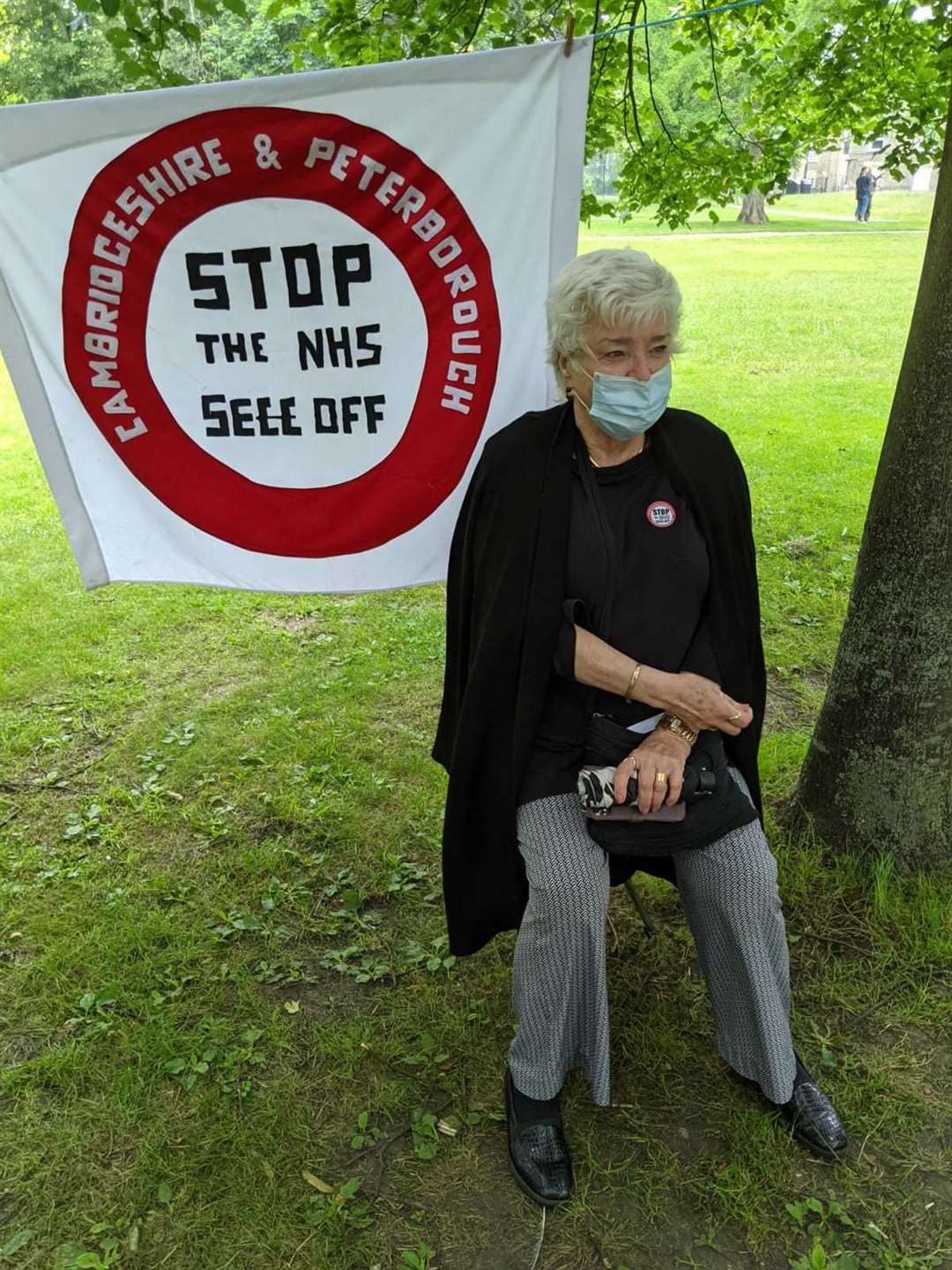 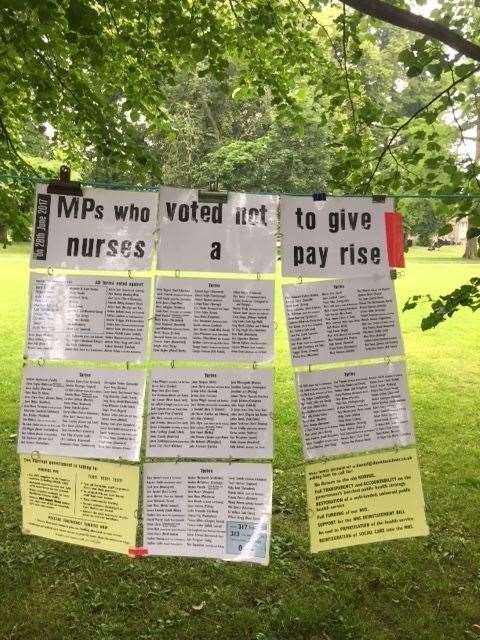 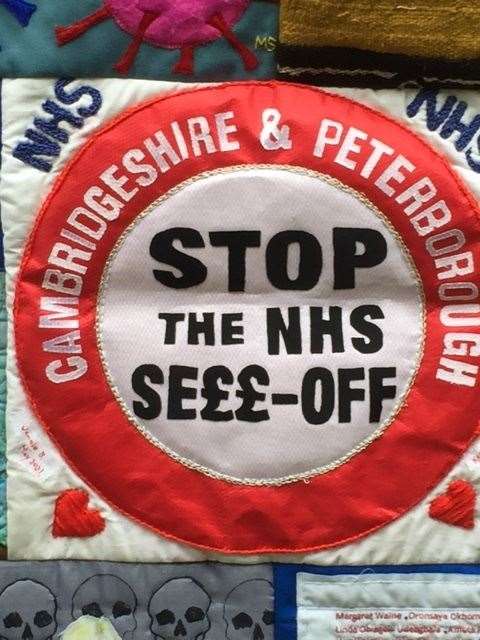 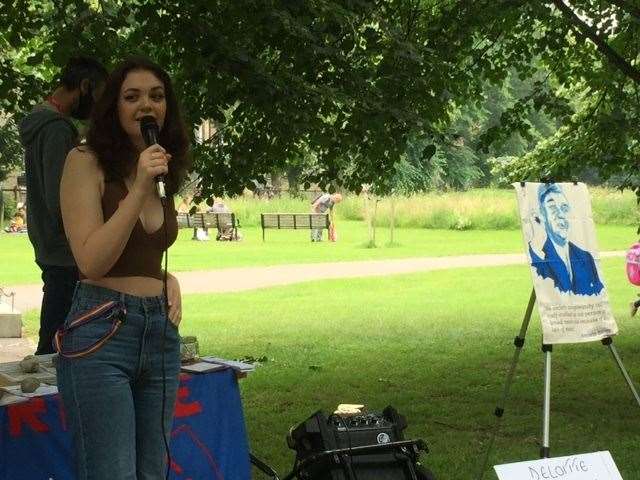 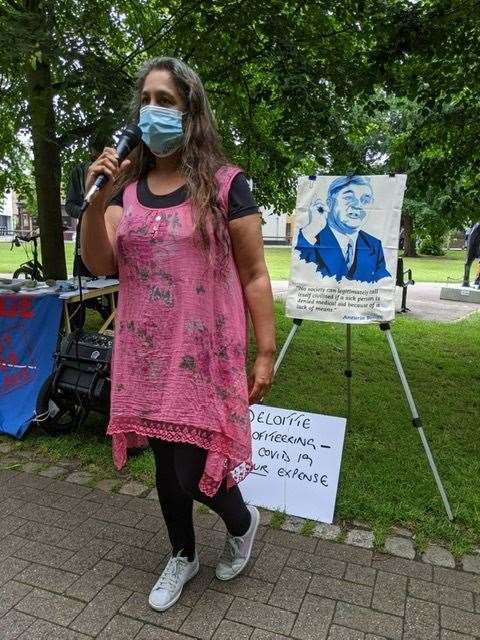 Cathy Dunbar organised the Cambridge ‘Threads of Survival’ quilt – part of a series of 13 quilts which will tour around the country. Each square has been created to represent what each person feels about our NHS. She expressed her fears about how the government is treating the NHS as a cash cow.

Jill Eastland of the Artists Union spoke about her mother’s experience coming to Britain from Mauritius in the 60s, expecting a welcome and finding instead a hostile environment.

“Experiencing hostile racism from some is still the case for many immigrants, despite the fact that they are the frontline staff in our NHS,” she said.

Steve Carne, from Call 999 for the NHS, talked about “the privatisation and re-badging of the NHS logo hiding private companies stealthily winning contracts where most profit was to be made”. He also referred to “the collection of all medical data on to a central database and the need to OPT-Out if you don’t want your data to be forever available for commercial and private research”.

Meanwhile, concerns were raised on Twitter about the blocking of a Facebook account. The block on the NHS Workers Say NO! To Public Sector Pay Inequality account was enforced during the day and expired at 7.30pm on Saturday. The account is run by Holly Turner who stated on Twitter that “the majority of @NurseSayNO key activists have had their Facebook accounts disabled/restricted today”.

A spokesperson for Facebook accepted that the temporary ban had been imposed and told the Cambridge Independent: “It seems to be one account – Holly Turner and the group NHS workers say no to public sector pay inequality – that may have had some issue.”

This was disputed by campaigners including ‘Fen’ – @Proletarian_Fen – who posted: “My Facebook posts have been restricted today too. I assumed it was just a glitch at first but other FB friends who regularly post about injustice, NHS privatisation, unionisation etc have experienced the same. Something very dodgy going on.”

Multiple posts on Twitter then confirmed that a ban was in place. Dawn Turney – @DTTOON1 – replying to @SocialistHB and @NurseSayNO, said: “I am banned from sharing posts until 20:14 today. Now I think I know why. Absolutely disgusting.”

Concerns continued through the afternoon, with some suggesting that the ban could have been instigated by the UK government.

The Department of Health and Social Care (DHSC) was contacted by this newspaper on Saturday afternoon. On Sunday morning a DHSC spokesperson responded, saying the situation was being investigated and suggesting a response was being formulated. No response had been made by 7pm, more than 24 hours after the original enquiry.

A Facebook spokesperson said on Sunday: “We are investigating the account and group you shared with us [@NurseSayNO]. I’m still waiting to hear back on the investigation.”

This article will be updated as soon as a full response has been made available: meanwhile, concerns about NHS workers’ pay, and the apparent ongoing privatisation of the NHS, remain ongoing, even as the vaccination roll-out continues.

Dr Copley concluded: “I took to the streets as a member of the grassroots campaign group Keep our NHS Public, 73 years after the NHS was built, to raise the alarm and demand an end to NHS privatisation.

“We call on the government to give NHS staff who have been at the frontline of the pandemic to receive the proper pay rise they deserve after a decade of real-terms pay cuts – ie consistently sub-inflation pay rises.”

- Click here for your weekly news digest of Cambridge Independent stories sent straight to your inbox.