The celebrations were of a thankful-for-the-harvest variety, the reflection because this incredible building has been in ongoing (give or take) use since 1150 - and renewal because a sense of community matters when people face collective challenges.

The organisers, Cambridge Past, Present & Future, encourage the reenactment community to take part. Kevin and Christie de Silva showed up from Essex in full circa-1450 regalia, and Christie set about showing how they made wooden spoons back in the day. Turns out that the species of wood matters a lot, the grain for lighter woods being denser, while the looser grain in, say, an oak tree, absorbs more liquid and food.

"Until the mid-1700s most people were eating with wooden spoons," says Christie's partner Kevin. "There were pewter spoons for posh people and they were fine for cold food which is what rich people could afford, but the metal wasn't suitable for hot food, it caused all sorts of problems. We're dressed in what would be worn in the late medieval period, when this Fair was at its height. We're reenactors - not just for this period, but also for Victorian England and England during the war, confusingly."

A hurdy-gurdy man and other musicians playing medieval instruments out on the green led some other reenactors - and visitors young and older - a merry dance.

Inside the Chapel, Honor Ridout's talk was titled 'History of the Chapel & Stourbridge Fair'.

"This is the only remaining part of the Leper Hospital in the 1100s," she told the packed - 50 people tops - chapel. "It has survived because of Stourbridge Fair and the devotion of people in the 19th century, who saw an early medieval building in Cambridge and wanted to preserve it. The very big priory down the road has gone now.

"We now people started giving land and property to lepers and the small group of monks who supported them. In this country and abroad caring for lepers was the thing of the moment - as was giving charters for fairs. The purpose of the fair was to benefit the lepers. When the fair was on every last room in Cambridge was occupied." 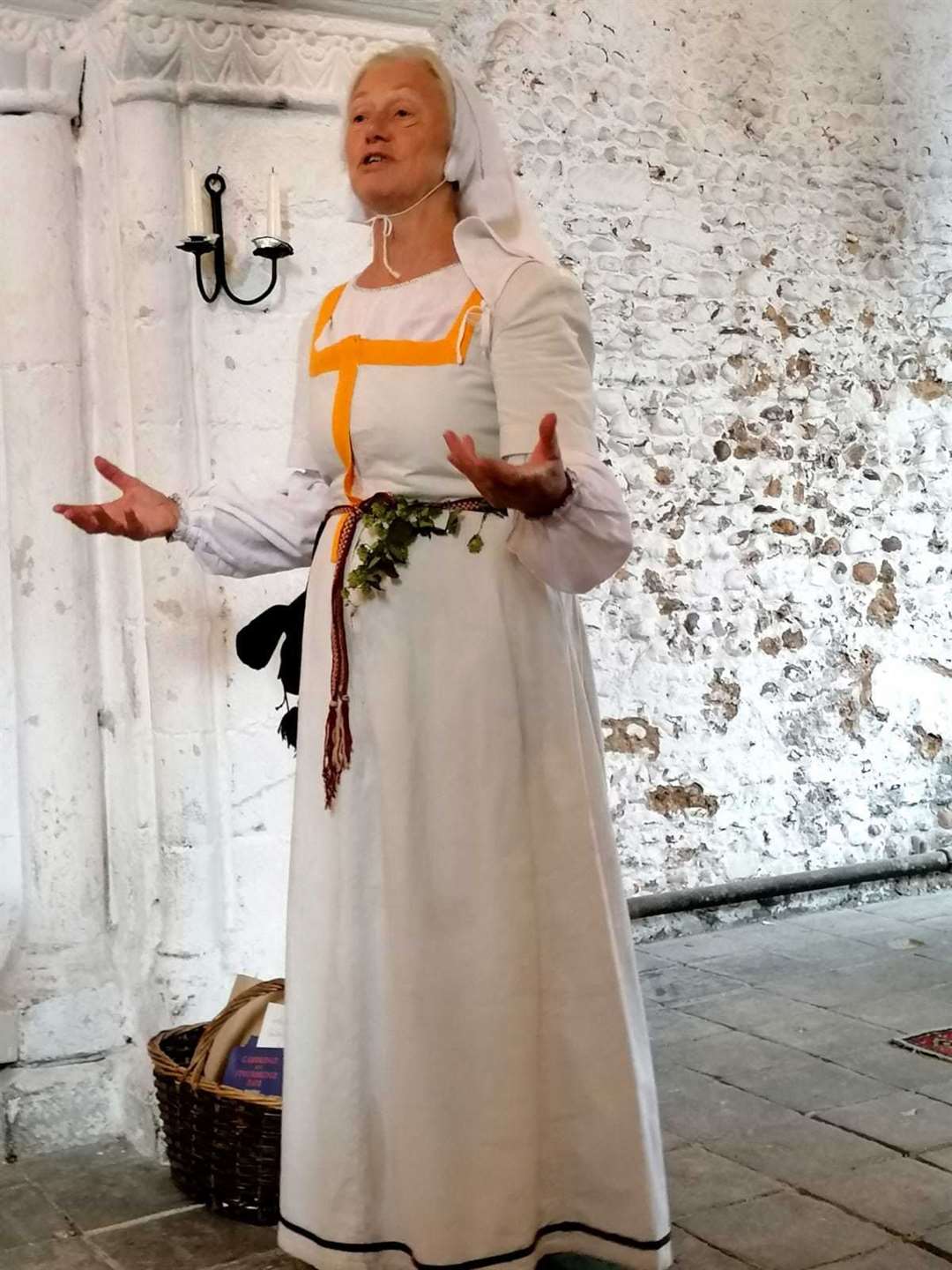 "By the time of Henry VIII the Fair was selling hops, which was very important in Kent, Sussex and Essex. They brought very large sacks of hops to the town and sold them on. Daniel Defoe [author of 'Robinson Crusoe'] described the fair as "not only the greatest in the whole nation, but in the world". But people were concerned. They would ask 'Surely the students can't be drinking so much beer?'

There was cheese, wool, cotton, spices, cloth on the stalls.

"Plus by the 8th century luxuries from London. First pewterware, which was replaced by china and glassware, plus silk, and 'the toymen' who sold buckles, buttons and small silver items like ink wells or milk jugs."

The Fair was absorbed within the university, who policed it with care.

"There were 25 places at the Fair to buy alcohol. The university had the rights to check the weights and measures so they fined all the other merchants three shillings and four pence for bypassing the university. The the fair started to fade as the traders set up shops in the town. By 1933 it was one ice cream seller and his dog, and the mayor was opening the Fair for a handful of people. It was closed until Cambridge Past, Present & Future came along, and there's other events, services and entertainment including plays..."

The indigenous population's curiosity about the city's back pages isn't confined to the historical past. There's a Chisholm Trail stand - the trail will go past nearby when it's opened - and a Historyworks stand which involves local historian Helen Weinstein. Helen is working with local artists Hilary Cox Condron and Jill Fordham on the Chisholm Trail leper chapel project, which will involve a mural at a yet-to-be-decided Chisholm Trail location. It's one way of keeping stories alive through the ages. Another way is hosting events like Stourbridge Medieval Fair, where the past mingles with the present and perhaps maps out some possibilities for the future.