Extinction Rebellion's campaign moved up a gear with the arrival of a medical students group to the cause.

The latest group to join - more organisations are expected to add their voices next week - attended their first XR protest in Cambridge on Friday as climate protest campaigners stepped up their activities over the bank holiday weekend.

The medics, many of whom are based at Addenbrooke's Hospital, joined around 150 other cyclists at Parker’s Piece for the Critical Mass Demonstration, which started out from Reality Checkpoint on the green at 5.45pm.

“We are in a state of climate and ecological emergency and [this event will] help us recruit more rebels as we move towards the next stage of our rebellion, beginning October 7,” said a spokesperson for the health campaigners.

October 7 is worldwide Earth Rebellion day and is part of an increasing vocalisation as disaster unfolds in South America, where more than 9,000 fires are raging in the Amazon, the ‘lungs of the Earth’.

“The truth is, the climate crisis is the greatest threat to health in human history,” said the spokesperson. “As future doctors, we spend countless hours studying so we are prepared to save lives. This pales into insignificance if we don’t act now: without action we choose a path for humanity that will include global food shortages and malnutrition, scarcity of water, displacement of billions of people, death by direct heat: a world full of unbreathable air and climate refugees.

“As medical students we learn about scientific evidence and how to use it to provide good care for our patients.

“Our government has known the certainty of the science for 30 years but has failed to act to mitigate the crisis. This is unacceptable.

“We are passionate that the public has a right to know the health effects of climate change.

“The effects of the climate crisis are already being felt in many parts of the world. We have a responsibility to prevent the biggest health catastrophe in human history.

“Our home is in a critical condition. We must act now. Join us before it’s too late.”

On bank holiday Monday the group exhibited its flair for creative initiatives with a ‘Cottenham on the Beach’ event on the village green highlighted the threat of rising sea levels to the village.

The crowd also enjoyed activities including giant Jenga, dancing, drum workshops for children and a giant simulated beach. A snorkel dance – how locals might have to go shopping in future? – proved an entertaining diversion in the unsettlingly hot sun.

“This is the third heatwave of the summer,” said Jamie Goodland, addressing the crowd and passers-by through a megaphone. “This is not normal. This is happening because, in the last 200 years, we’ve been pumping carbon and methane into the air. We’ve come out here for a bit of fun today but we’re also reminding everyone of what’s happened over the last two centuries.

“We’re not going to give up until this system collapses; we need system change because this climate crisis is just one symptom of what’s wrong with our society.”

One of those on the village green gave the lie to the notion that this is a middle class movement.

Speaking of the “co-ordinated struggle with other members of the working class” - and at his first XR event - Red Turner said: “"It's the same as when people join the anti-fascist movement. People are seeing this is all part of a wider picture and that's when they begin to think; 'It's all starting to make sense'.

"I see this as a rallying point for members of the working class.”

The working classes weren't so entranced on Tuesday morning when XR campaigners blockaded the Esso petrol station on Histon Road from 7.45am to 9am on Tuesday, causing some consternation among motorists.

One XR protestor put the anger down to “toxic masculinity”. The driver of one blue hot hatch insisted on doing handbrake turns in the middle of Histon Road – a sort of dirty protest against the blockade. There were plumes of acrid smoke coming from the wheels. The behaviour is clearly dangerous. 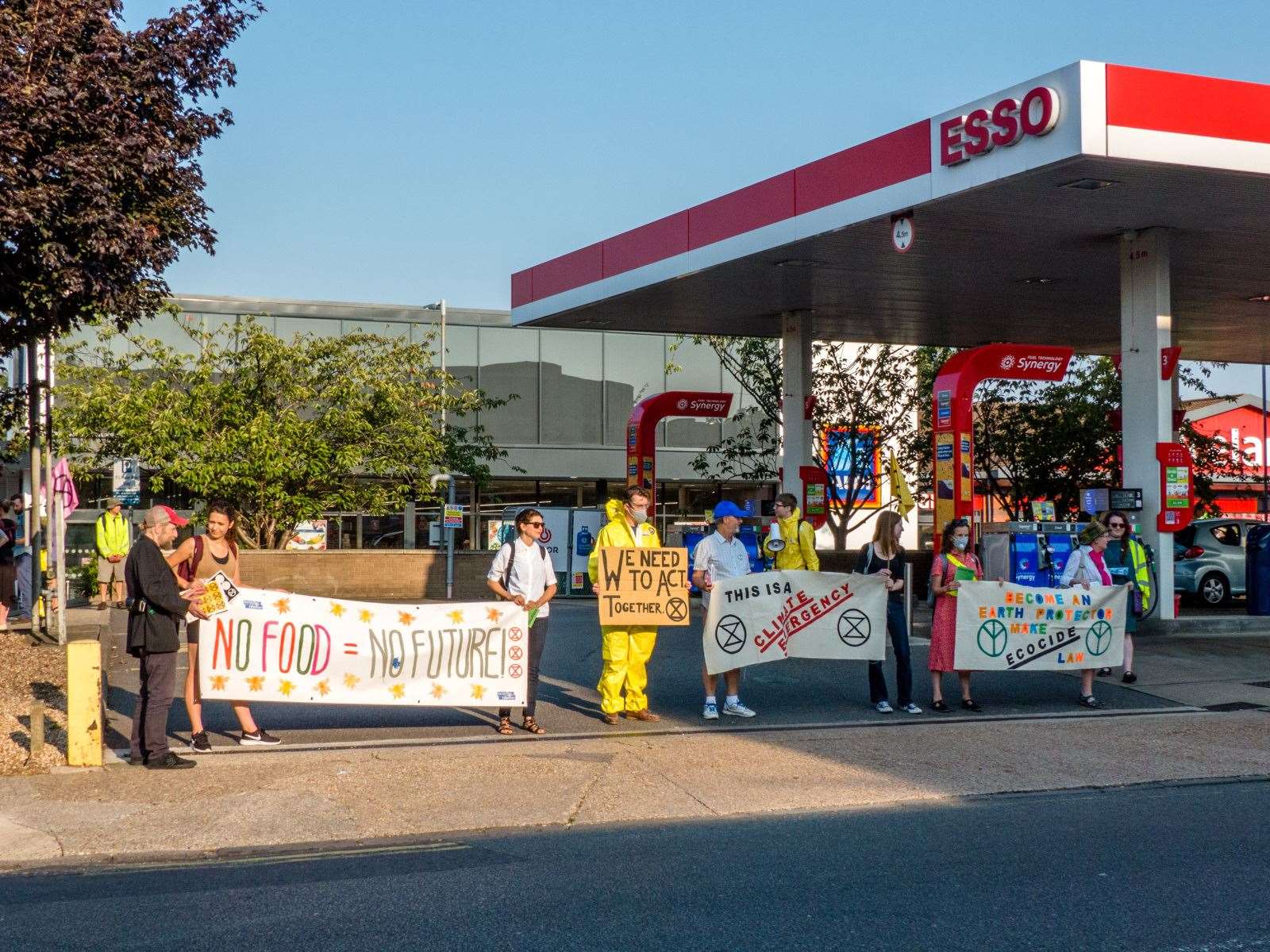 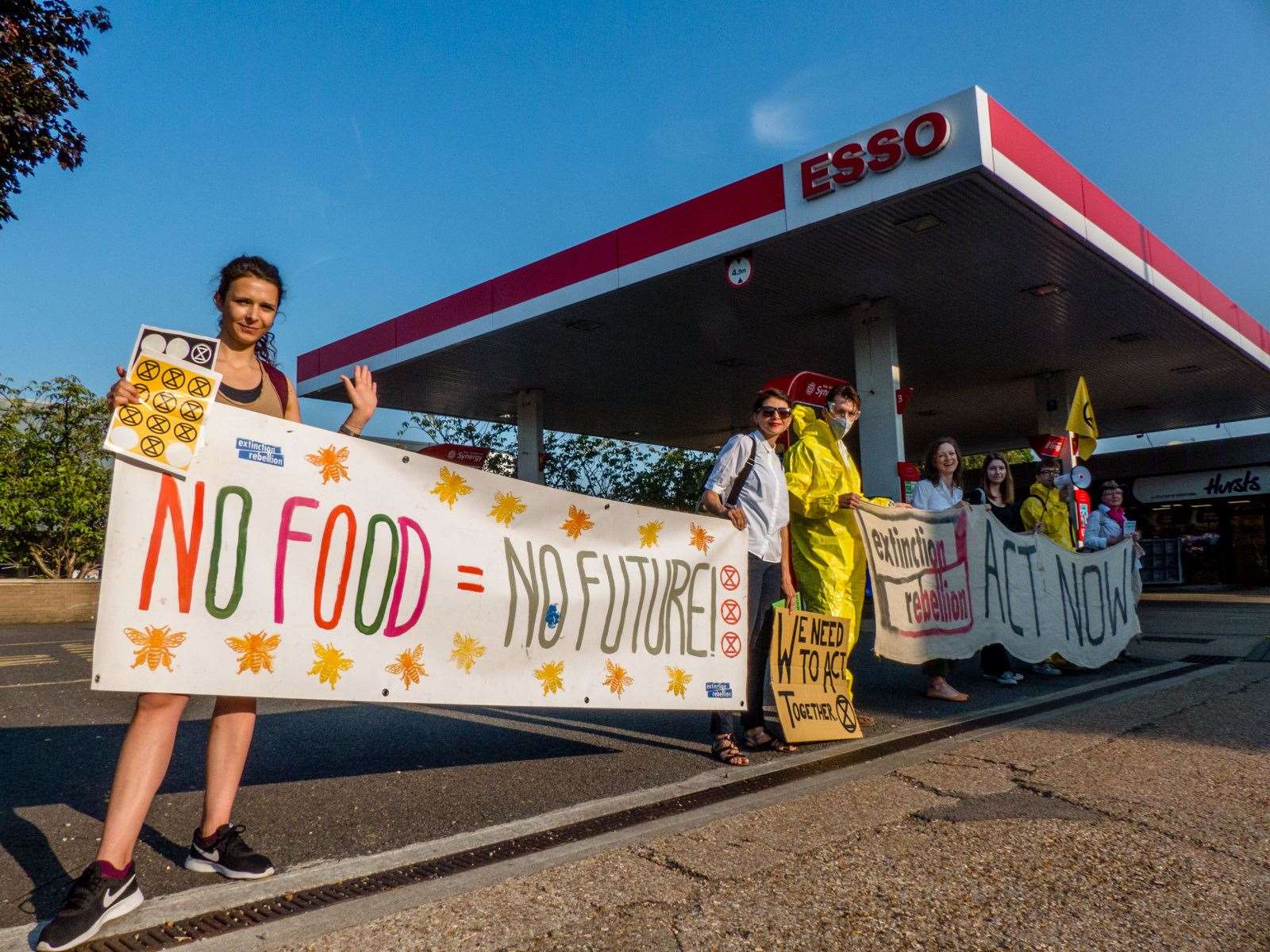 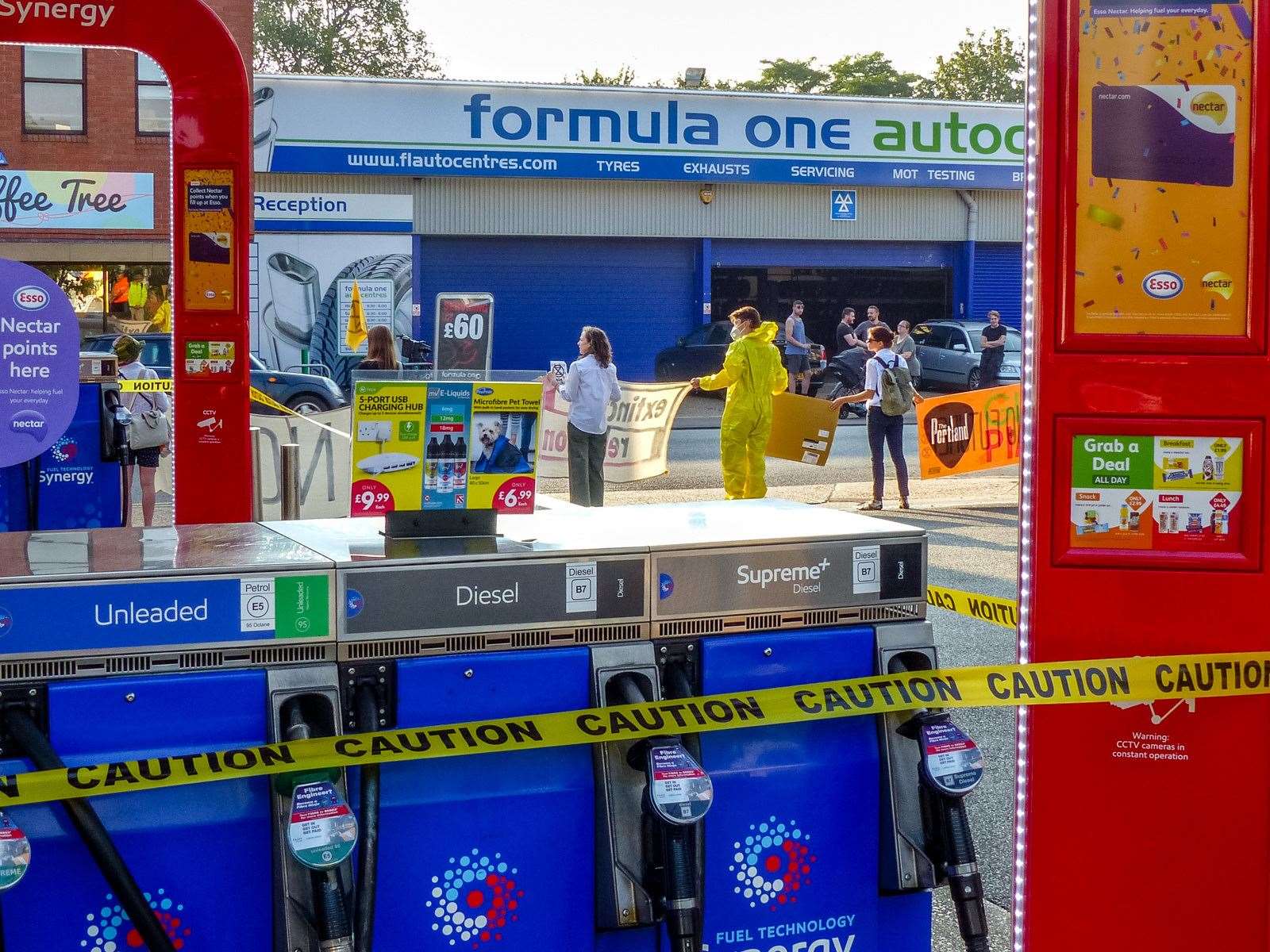 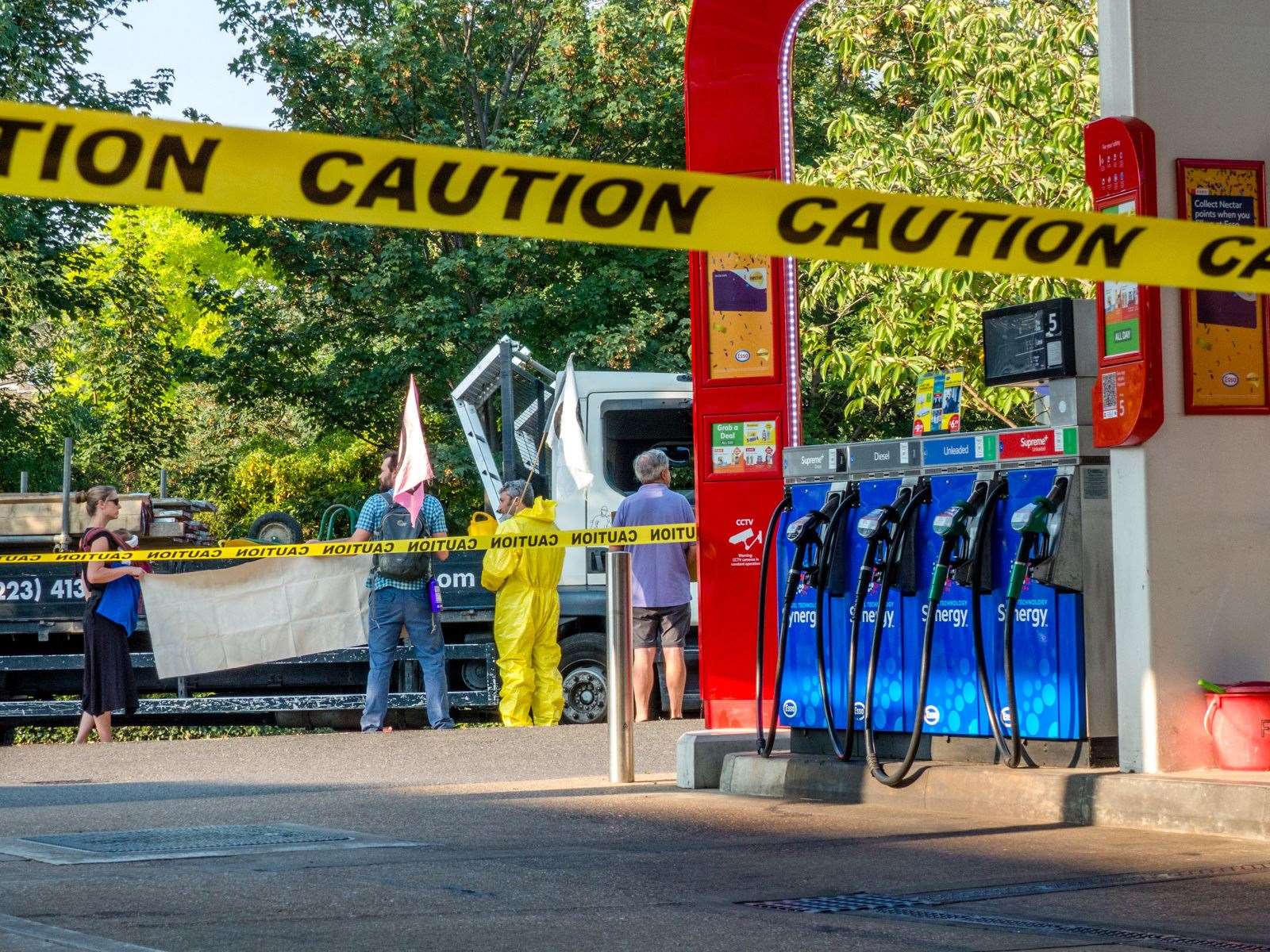 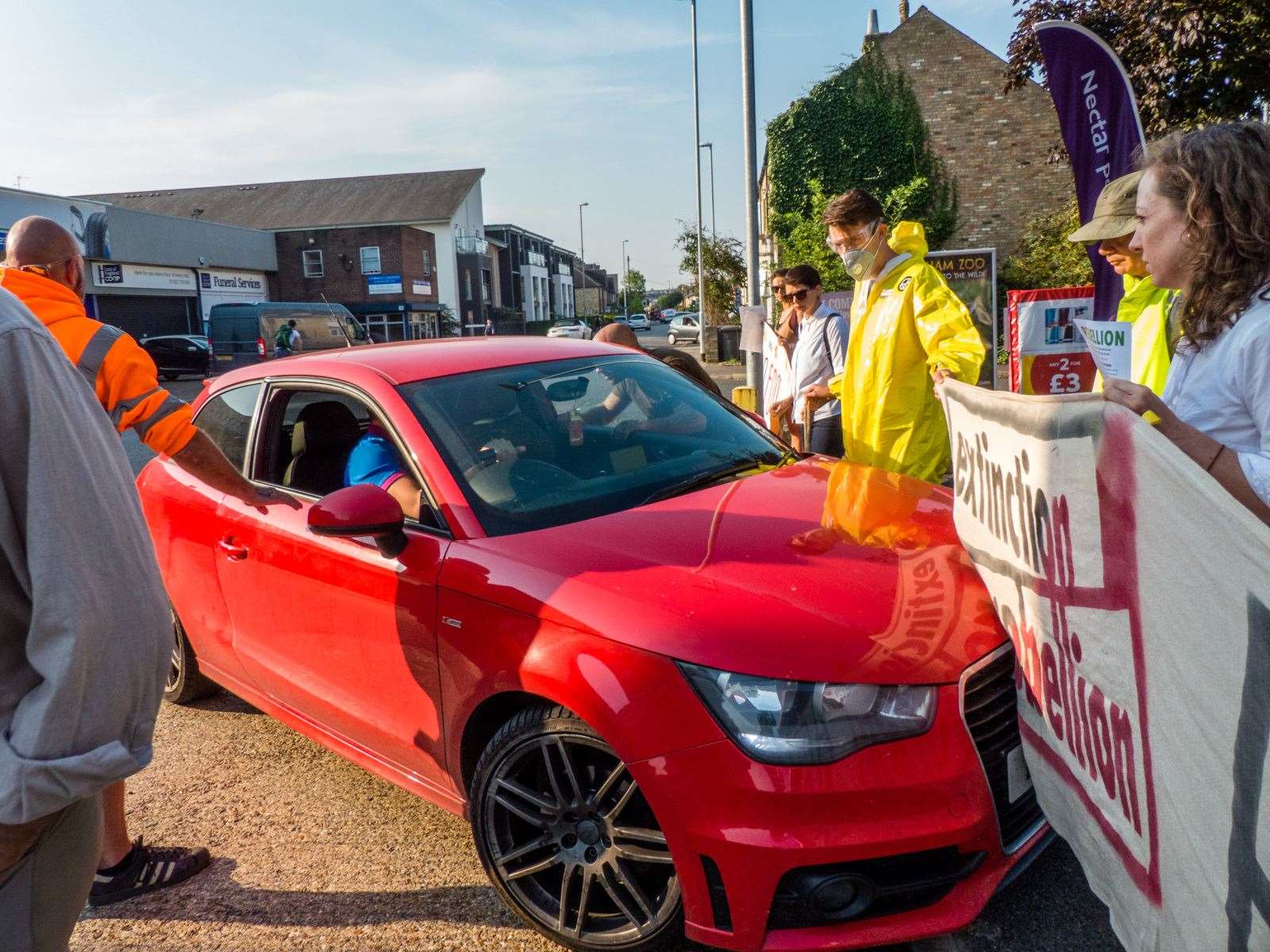 Another source of anger was perhaps more legitimate, from a lorry driver who couldn’t refuel.

“I need to get the lorry to London, but I can’t,” said one of the scaffolding firm's workers. “I’ve got an Esso fuel card which I use to fill up here. This is just a waste of my time.”

An XR protester responded: “I do apologise, we don’t want to be here.”

“What about ambulances though, would you let them in?” asks the worker.

“We’d let an ambulance in, of course,” replies the XR campaigner.

“So you’re targeting regular, normal people who go to work every day, then? That’s not helping anyone, is it?”

Later, an XR protester takes to the megaphone.

“We’ve known for more than 100 years that we’re ruining the climate,” he says. “It is not OK for companies like Esso, BP and Shell to sell our futures for their profits. Two hundred species are dying every day – we do not accept mass extinction when we can stop it. We will not be able to grow our food, we will not have oxygen – the Amazon is burning for cheap fuel, for cheap beef. We do not have to stand for this.”

Extinction Rebellion has already effected change in 2019. Everyone now knows what is going on. The evidence is literally in front of our eyes.

But on another level, nothing has changed: there are more flights than ever, more cars, more people, more emissions, more pollution, more species dying, more record temperatures being set. All you can say is that at least the Extinction Rebellion movement is trying to do something.