A "die-in" on King's Parade brought traffic in the iconic city street to a halt today as young people took to the streets again to demand urgent action on the climate change crisis that threatens their future.

Around 200 protestors dressed in blue lay down in the road to highlight the disproportionate impacts flooding and sea level rises could have on future generations and marginalised communities in the developing world.

"Blue is like a flood," said Helena Frances, chair of organisers Cambridge School Eco-Council, explained. "Our city is very low-lying, but it's also blue in solidarity with people in Mozambique and everywhere else where climate change is already happening."

Having started at Shire Hall at 11am, the campaigners marched to King's Parade where the die-in took place for 11 minutes - one minute for each year left before catastrophic climate change becomes irreversible.

Speaking at Shire Hall, Dr Rowan Williams said: "The good news is that there's a possibility that we haven't yet gone past the point of no return - but the bad news is that we're very very close to it. The way that we're living as global civilisation is at odds with our own nature. We're at war with nature - and that means we are at war with ourselves, and that's a very very bad place to be for our mental and spiritual health as well as our survival, so my message this morning is to be at peace with yourself. Don't be at war with nature, don't be at war with yourselves."

The talks at Shire Hall included an epic lament by Prof Bhaskar Vira, director of the Conservation Research Institute for the way that climate change is affecting those who contribute least to it and are among the world's poorest citizens.

"You're going to inherit a much more difficult world than the one your parents and grandparents inherited," Prof Vira told the crowd in front of Shire Hall. "And it's a world of strange paradoxes of under-consumption and over-consumption. Every night 800 million people go to bed hungry, while there's 800 million people suffering from problems connected to obesity. 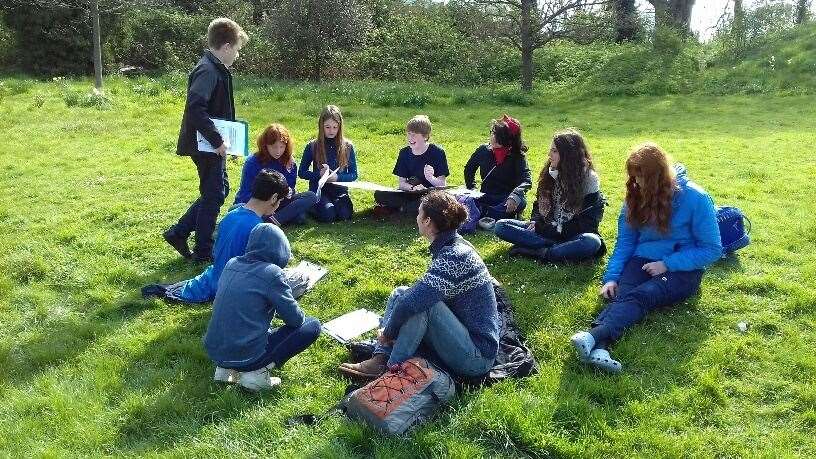 After further talks - Dr Joanna Depledge, editor of Climate Policy Journal, said that the current enthusiasm for climate change denial is funded by the fossil fuel industry and pointed out that despite "people like Donald Trump, who is a climate change denier, other actors are getting going in the US, with Google, Amazon and Apple all announcing carbon-zero policies" - the crowd was split into groups for educational workshops. Groups of seven or eight children and teenagers discussed how to make a difference, and relayed their conclusions to the whole. One group spokesperson reiterated a common realisation among attendees when she said that "past generations have passed this on to us and we need to do as much as we can to talk about it and change it otherwise we literally have no future".

After sitting down in King's Parade a solitary Great St Mary's Church bell rang 11 times. The protestors started off chanting, including a call-and-response led by Junayd Islam, followed by silence.

Today’s protest is the third Friday’s for Future that Cambridge has seen in the last three months demanding climate justice and urgent action on climate change. The movement inspired by Greta Thunberg has gathered unprecedented momentum worldwide, with more than 1.6 million children taking to the streets on March 15. In the UK, under the banner of Youth Strike for Climate UK, school students have organised monthly strikes for three consecutive months starting on February 15 in a coordinated school strike across the country.

Ella Hone, of Chesterton Community College, said: “This Friday is my 12th birthday, so as a birthday present I would like people to understand how important it is not only to me, but to everyone. Climate change is affecting all life on earth, and what we are doing this Friday shows how desperately we need to stop it.”

UK school children are calling for a general mobilisation during the next Global Strike for Future on May 24.