Emma Reay thought she had come up with the perfect solution to help her rescue cats –Huxley and Guin – come and go as they pleased from her first-floor apartment.

She put up a ‘cat ladder’ outside her of home in Hawkey Road, Cambridge, so they could go out to exercise.

But the managing agents of the block have removed the wooden ladder, which was attached to her balcony, stating it was a fire risk. Emma, a PhD researcher, protested the removal with a sign on her balcony that said:“The cowards took our cat ladder.”

Emma said the agents had warned her, but she nonetheless upset when just over a week ago the ladder was taken down.

She says: “It was something I built with my father. He gave me the wood as my birthday present. The fact it has been torn up is really hurtful and upsetting. The cats are really used to being outside and if I keep them in they get very stressed and just walk around meowing and staring up at me. 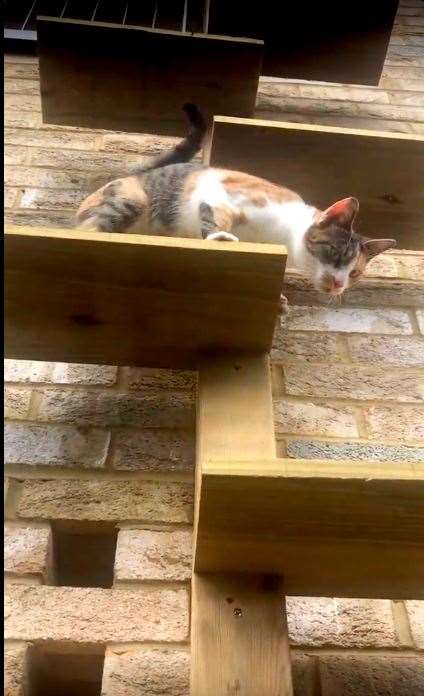 “They keep trying to tell me that the cat ladder has gone. They go to where it was, crying, and then walking back to me and looking up desperately trying to communicate.

“It may not be a common solution but it seemed like a good one and it wasn’t attached to the walls, it was just fixed to the railings of my balcony.”

The cat ladder had been up for several months and Emma was only contacted about it by the managing agents, Encore Estates, after the freehold of the property was sold to new owners Adriatic Land 9.

Emma said: “I emailed the estates management company with different suggestions about how I could adapt or change the ladder so that it fit in. I was happy to work with them or compromise so it worked for everyone. But a lot of my emails went unanswered.

“I feel like it’s not really my home any more, even though I have bought it,which might seem melodramatic but I feel like I can’t do what I want to do.

“I totally get that if I was saying to them I wanted to graffiti a massive swastika on the side of the building they would be well within their rights to say absolutely not, but what I’m asking for is something that has the explicit approval of everybody else in the building, and it’s also something that is kind of cute and is inconspicuous.”

A spokesperson for managing agents Encore Estates said: “Ms Reay erected a ladder onto the exterior of the apartment building, in space that is not owned by her, without prior warning or consent.

“She has been politely informed on several occasions that this is a breach of the lease which she signed, in addition to posing security and fire safety risks, and has been asked to remove it.

“In these circumstances, in order to ensure the safety and security of the building as well as the quiet enjoyment of the property by other residents, it is entirely reasonable for the freeholder to remove this item.”