Declaration of rights for the River Cam led by ‘trailblazers’

A passionate declaration of the rights of the River Cam took place on Midsummer Day at Jesus Green.

Participants at the family-centric event began gathering at 4pm for the occasion, which is part of a worldwide movement “seeking to reverse environmental degradation through the recognition of nature rights, including river rights”.

Performers from the Ocean Wave off-shoot of Extinction Rebellion danced and shimmied towards the river’s edge at Jesus Green before the assembled participants heard from speakers urging an end to the pollution of the rivers and chalk streams in the area. England is home to 85 per cent of the world’s 220 chalk streams, and Cambridge has Bin Brook, Cherry Hinton Brook, Coldham’s Brook, Hobson’s Brook and Vicar’s Brook – all chalk streams – to look after.

One of the speakers, Paul Powlesland, a barrister and founder of Lawyers for Nature, called those attending “trailblazers” for being at “the first such event of its kind”.

“The difficulty we face is that the environment is not being given the importance it deserves by the government,” he said.

“They need to declare the rights of the river and act as if they exist, because just declaring the rights on their own has no effect whatsoever, but if you take the rights seriously and hold them in your hearts the impact is very significant.”

The group of around 100 people then read the declaration of rights which include:

- the right to flow and be free from over-abstraction

- the right to be free from pollution

- the right to perform its essential functions

- the right to feed and be fed by sustainable aquifers

- the right to biodiversity

- the right to restoration

- the right to maintain its connections with other streams and rivers.

Attendees also pledged “to act as guardians of the River Cam”. Guardians will act to “reduce the threats to its health and survival” and “engage with the river in a relationship of respect and stewardship and cease its exploitation”.

Organisations supporting the Cam rights declaration include Friends of the Cam and Cambridgeshire CPRE (Campaign to Protect Rural England).

CPRE Cambridgeshire chairman, Alan James outlines two types of damage: over abstraction of water from the chalk aquifer which feeds the Cam tributaries and loss of nature and tranquillity from the river and its surrounding countryside.

He said: “CPRE fully supports Friends of the Cam in their battle to keep the river pristine for current and future generations.

“No amount of artificial meddling to support unneeded development around Cambridge will suffice. Only protection and restoration of the real thing will ensure an ecologically sound waterway.”

Friends of the Cam is a Cambridge-based campaigning group committed to restoring the health of the River Cam and its tributaries. The friends note damage from over-abstraction, agricultural run-off and sewage discharge, leaving the Cam and other nearby rivers (such as the Great Ouse) “in poor condition with very low flow levels and dirty water”. 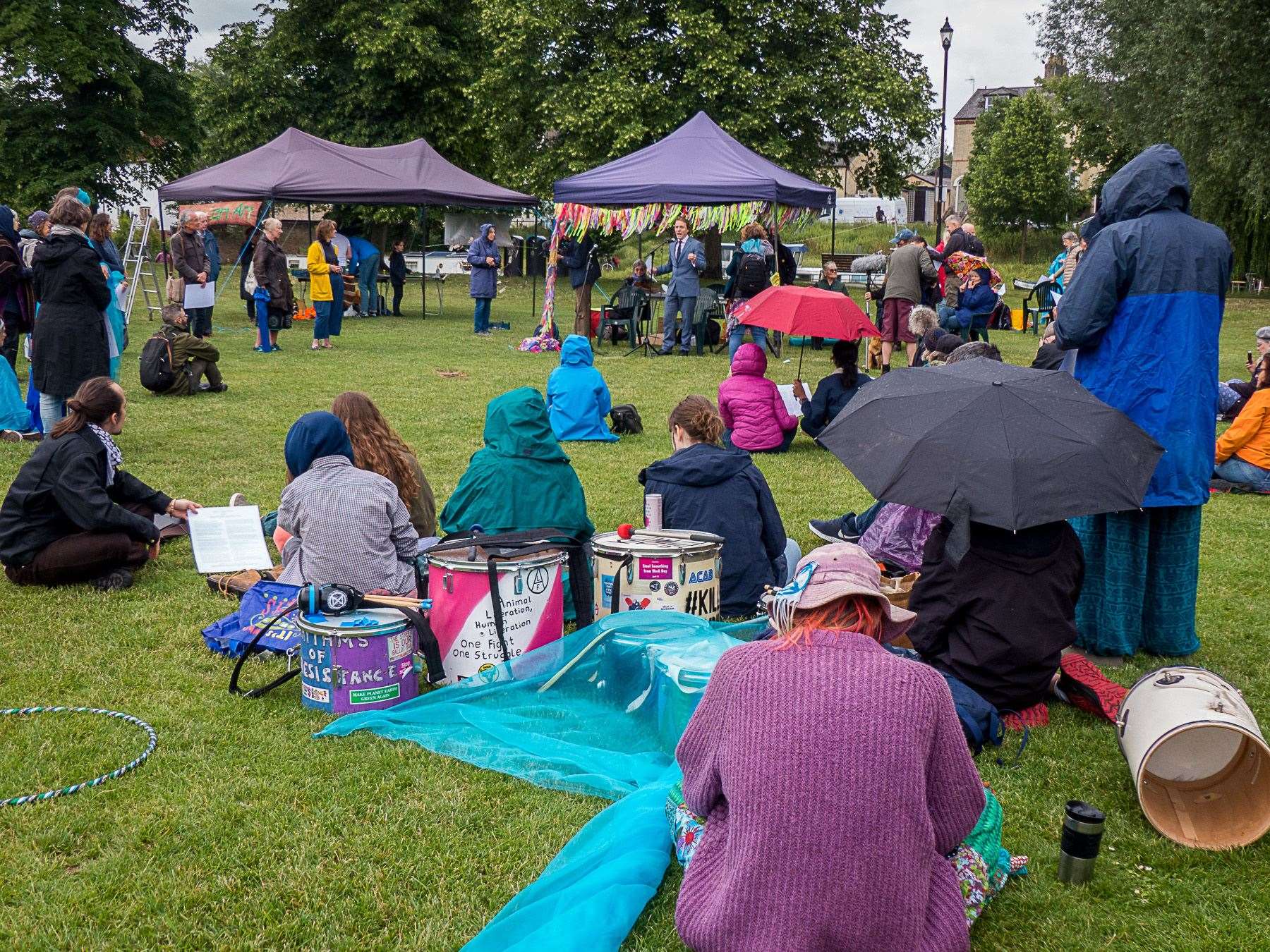 The organisation opposes the growth in building houses and offices, which “puts further strain on natural water flow, preventing the restoration of an already depleted system”.

The water in the Cam remains a concern for bathers because it is regularly polluted with raw sewage and industrial waste, pesticides, fertilisers, microplastics and other plastic waste.

Tony Booth, a spokesperson for Friends of the River Cam, and one of the organisers of the event, said: “The flow of the Cam is artificially maintained in the summer and suffers regular discharges of raw sewage.

“The unsustainable supersizing of Cambridge, its surroundings and across the region is about profit for developers, estate agents and the Treasury. If this continues, nothing can prevent further decline in biodiversity. In defending the rights of the river, we defend all life.”