The Schlumberger Gould Research facility is a distinctive marquee-like structure dominating the High Cross site on the western outskirts of Cambridge. The building houses more than 930 m2 of laboratory space and offices for more than 100 scientists and technicians.

Research focuses on drilling, chemistry, fluid mechanics, and seismics. Described as an "oilfield services company", the global corporation operates in over 85 countries, employing 100,000 people and boasting annual revenue of $32billion. It researches new technologies at centres such as the Cambridge unit, developing methods to extract fossil fuels through Arctic exploration, deep-sea drilling, fracking and "re-fracking". Schlumberger has developed over 35,000 patented technologies to extract fossil fuels for profit. Its head office is in Houston, Texas, with significant centres in Paris, London and The Hague.

Extinction Rebellion Cambridge says that "it cannot sit by and allow Schlumberger’s research to continue at a time when Australia is burning, Indonesia is flooding and global political tensions are rising".

Around 30 people were at the site this morning and are expected to stay until midday. Two persons were locked in a bath tub to the back gate, with other activists at the front.

"Security seem to have shut down the building," an XR protester at the site told the Cambridge Independent. "I can't see anyone coming in to the building, it seems to have been shut. We have been asked to leave but other than that it's been quite peaceful. The police are here.

"We're doing this because Schlumberger is so egregiously bad, they describe themselves as a world leading oil field services company, they're involved in fracking, drilling and pretty much every bad oil activity, while also greenwashing themselves as they go."

"The time for polite requests, petitions and pandering to fossil fuel companies is gone," said Edie Turner, of Extinction Rebellion Cambridge. "Our future is disappearing in front of our eyes. Our siblings in communities all around the world are facing scarcity, wars, displacement and unprecedented natural disasters all caused by the industry that is being targeted in this blockade today. This will not get better until fossil fuels are left in the ground. This will not get better if companies like Schlumberger are allowed to continue investing in extractivism."On its website, Schlumberger states that it is committed to "conducting business in a manner that preserves and respects human dignity" and that they have a "long-standing culture of global social and environmental stewardship".

Extinction Rebellion Cambridge says that evidence from across the oil industry contradicts this, citing NGO reports which suggest discrimination, sexual harassment and illegal contract termination. The activists also point to the destruction the fossil fuel industry is causing to the planet and communities around the world. 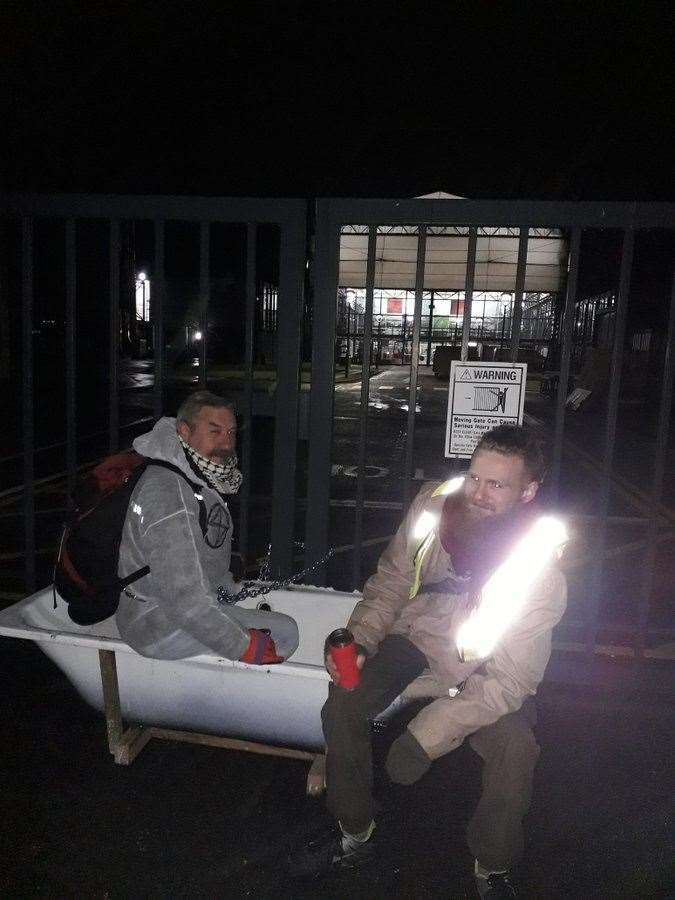 "If you are really committed to these things, prove yourselves," said Annie Rose of Extinction Rebellion Cambridge Youth. "Prove yourselves by ceasing all research into fossil fuel extraction. Prove yourselves by moving all your investments into renewable energies, and by providing a just transition into the renewables sector for all of your workers. Prove yourselves by pledging to restore the ecology and the livelihoods of the people in areas where your drill rigs have ripped holes in our planet and our communities."

Extinction Rebellion Cambridge says it also wants to highlight Schlumberger's connections to Cambridge University. Through the Schlumberger Cambridge International Scholarship, the university provides training and resources for the fossil fuel industry. The university also maintains a Schlumberger Professorship of Complex Physical Systems. This is just one of the University's many connections to the fossil fuel industry, which also include the BP Institute and associated professorships. Extinction Rebellion point out that this runs contrary to the University's claim to be tackling the climate and environmental crisis.

Ms Turner added this: "Today, our message is clear: we won't sit by whilst Cambridge University supports research into oil extraction in our own backyard. We are standing up to disrupt business as usual and sending a message of solidarity to all those whose lives have been destroyed by Schlumberger’s fracking and drilling technology. Today, we say 'Nae Pasaran': we will not allow our local community to be complicit in the destruction of fellow communities around the world."