The centre of Cambridge had a festival feel today as environmental campaigners from Extinction Rebellion blocked the streets and the Big Weekend provided free live music on Parker's Piece - while shoppers learned about sustainable consumerism at the second Cambridge Eco Living event in Lion Yard.

The much-heralded 'Streets for Life' protest proved a revelation for shoppers, campaigners, visitors, revellers, the curious - and one bridal couple whose wedding procession took a walk along St Andrew's Street to the sound of 'congratulations' and cheers from passers-by.

"There's lots of people here, it's a nice atmosphere - I wish it could be like this all the time," said one visitor.

"We're having a great time, it's nice to be relaxed in the centre of town and not have to worry about traffic," said one father out with his partner as their young children played in the middle of Regent Street.

Suggestions of traffic chaos and bad behaviour proved wide of the mark. The Big Weekend on Parker's Piece was in celebratory mood after a hugely successful Friday evening with Doctor & the Medics followed by headliners Kid Creole & the Coconuts.

As Saturday morning showed its face, the city started slowing down. Roadblocks were set up on Trumpington Street, Tennis Court Road and Downing Street at 8am, and another along Regent Street after midday. Apart from a traffic build-up on the junction with Gonville Place and Hills Road there was very little inconvenience - or perhaps it was just that those who dislike Extinction Rebellion protests were far away, leaving the daytime strollers to enjoy their time in the sun. Until the rain came down mid-afternoon, at least. 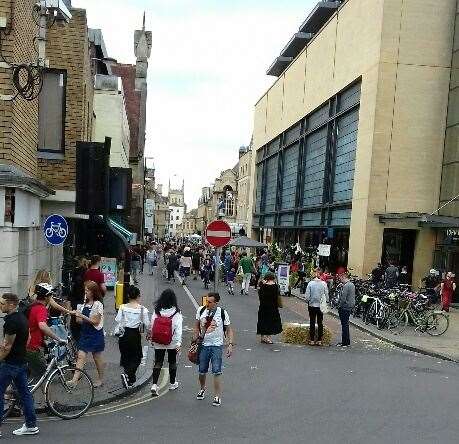 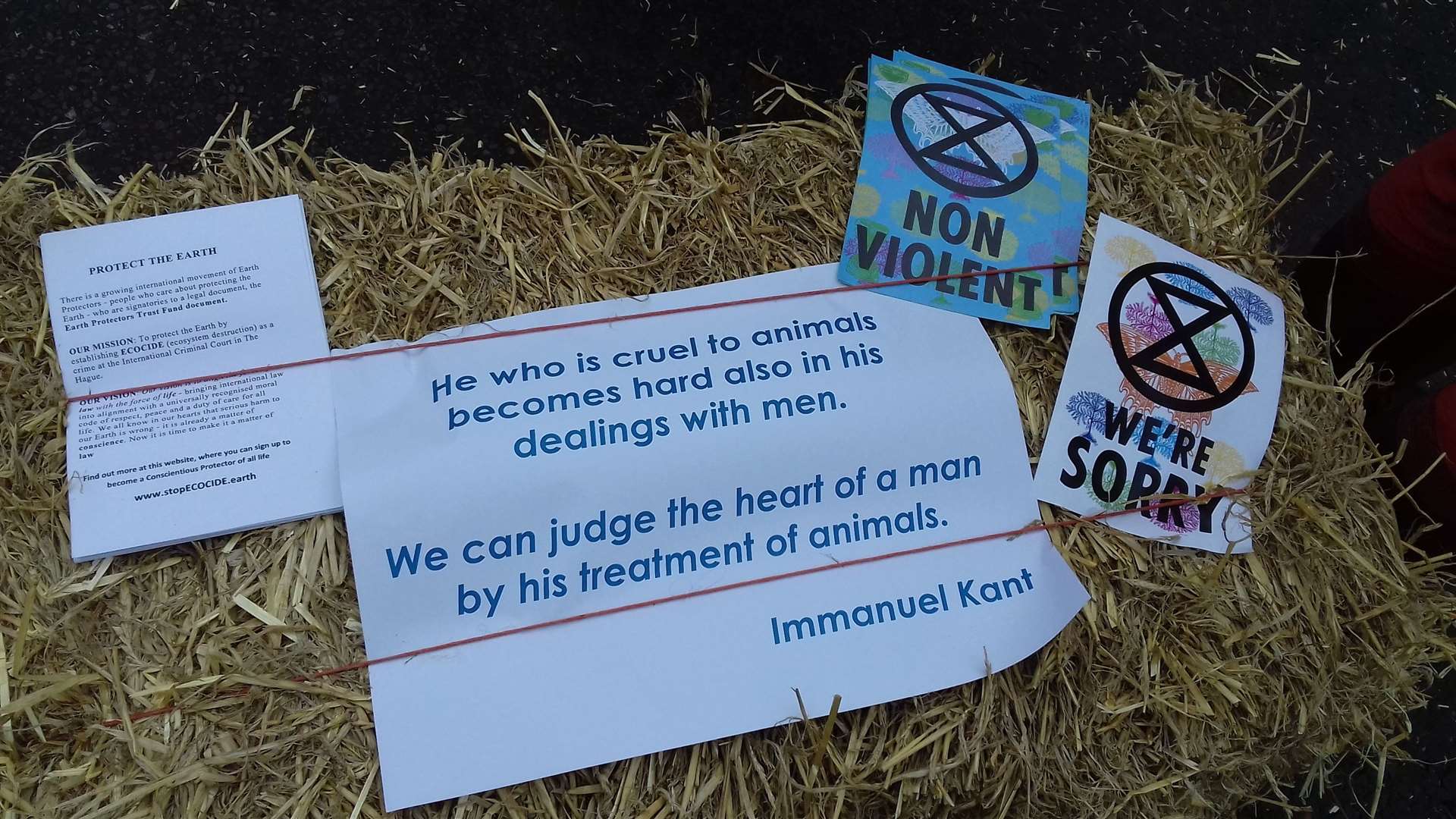 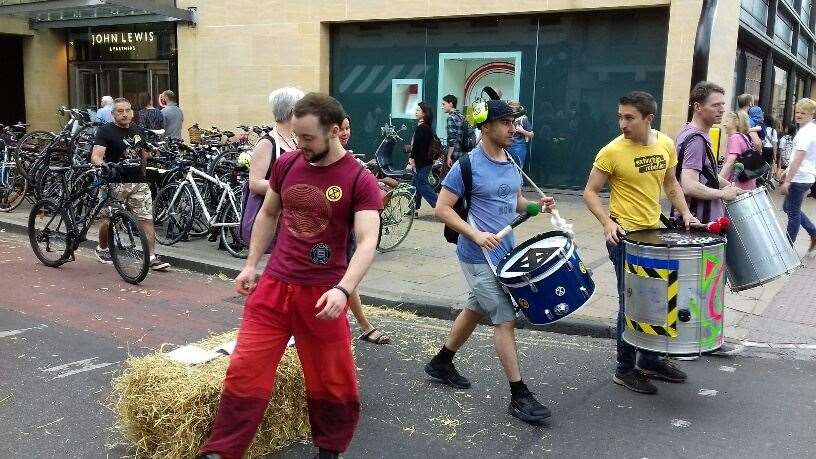 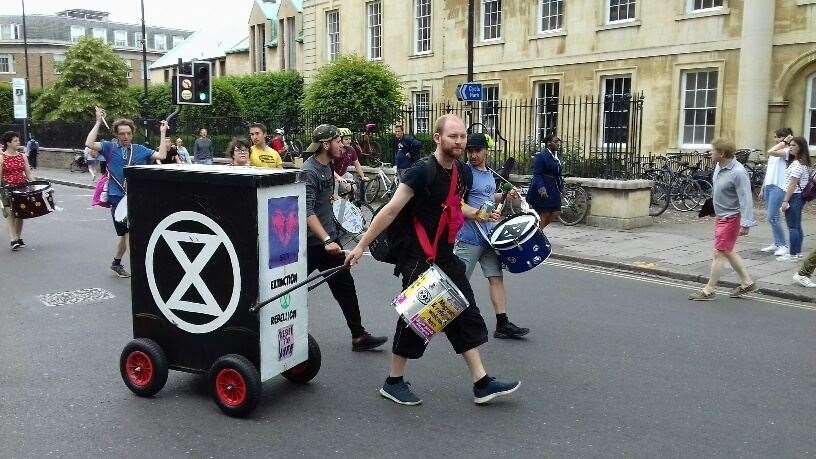 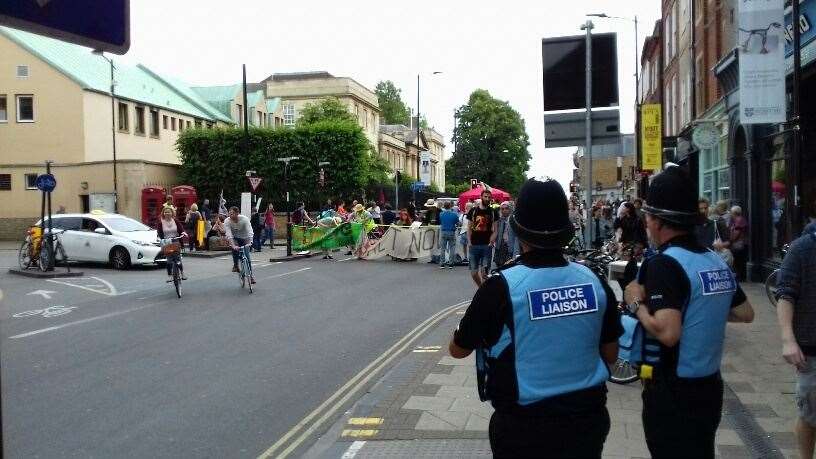 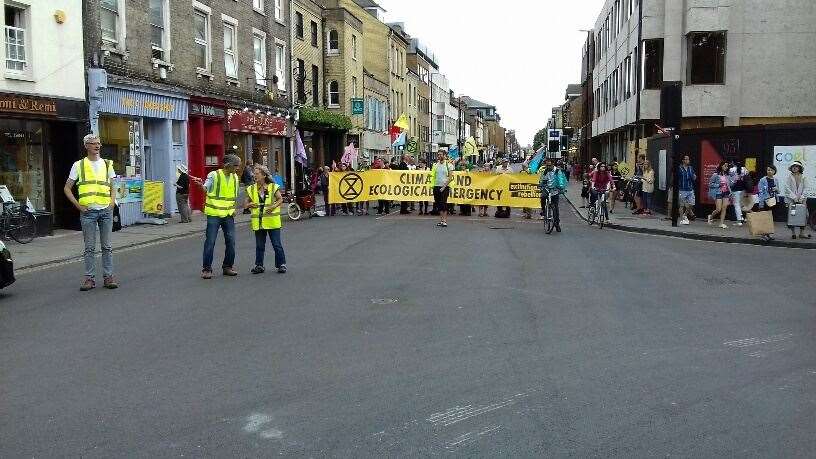 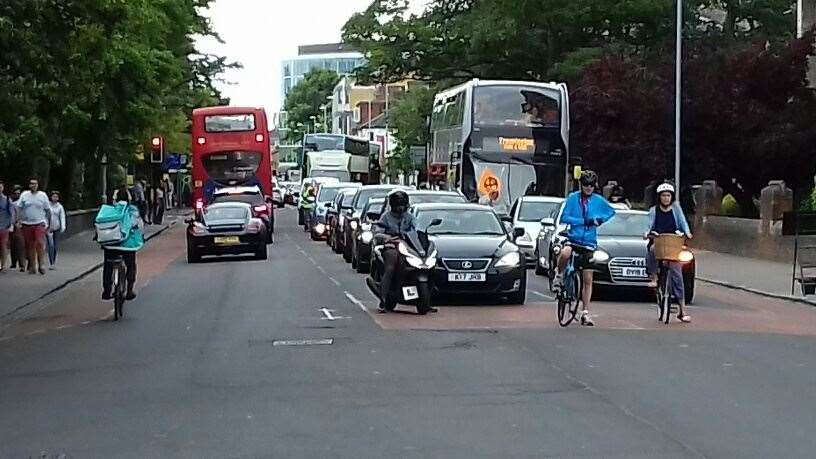 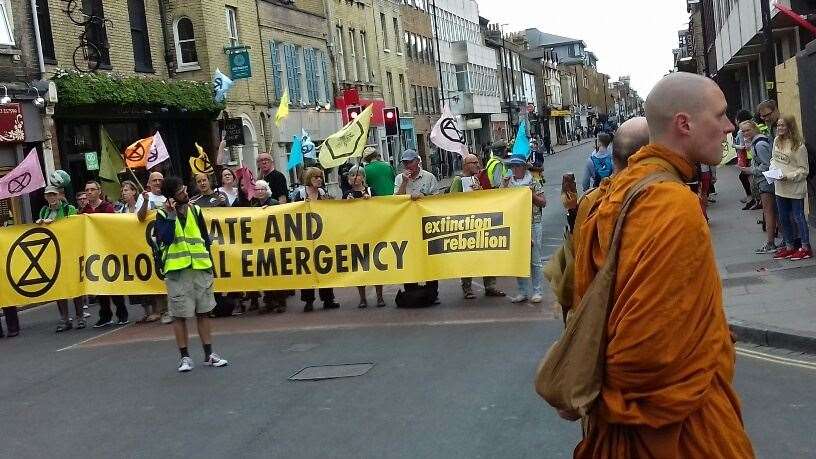 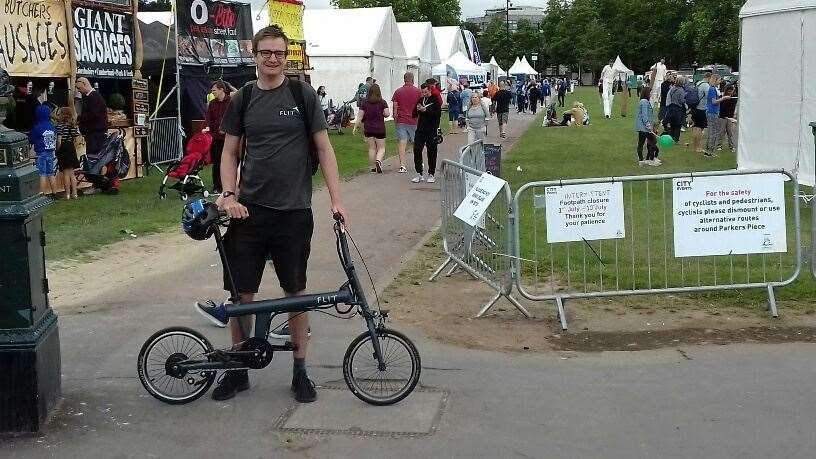 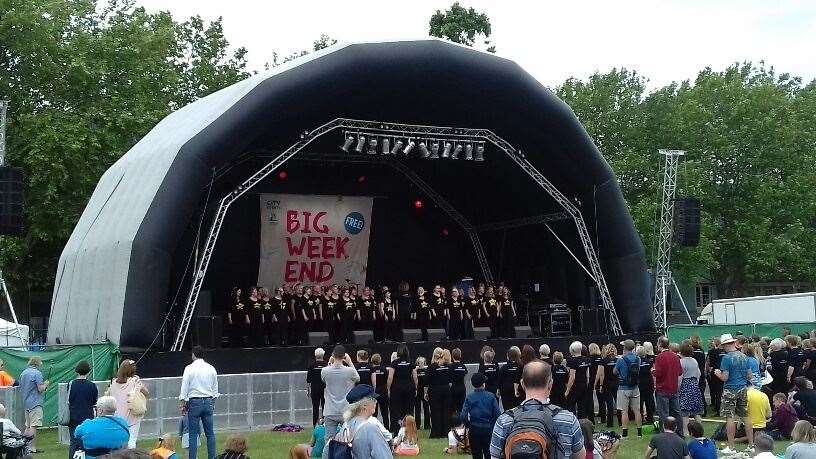 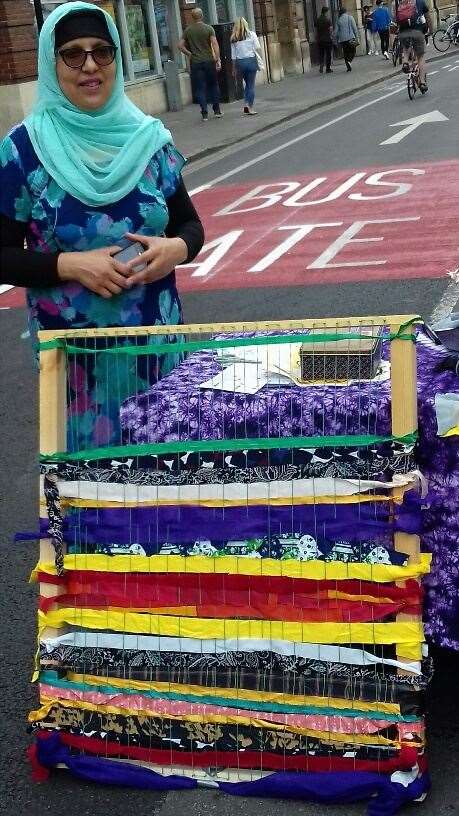 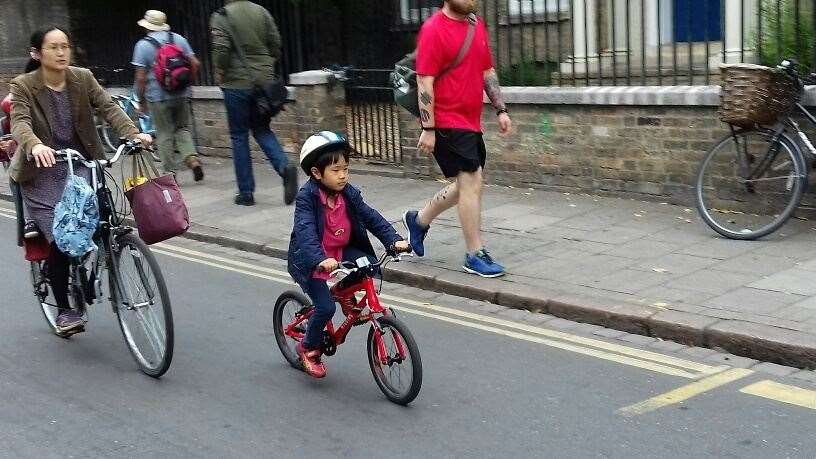 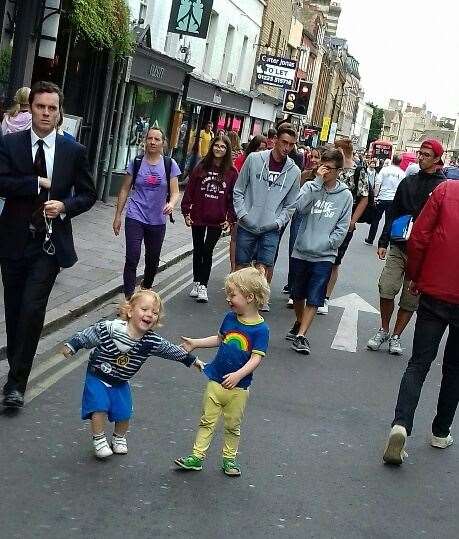 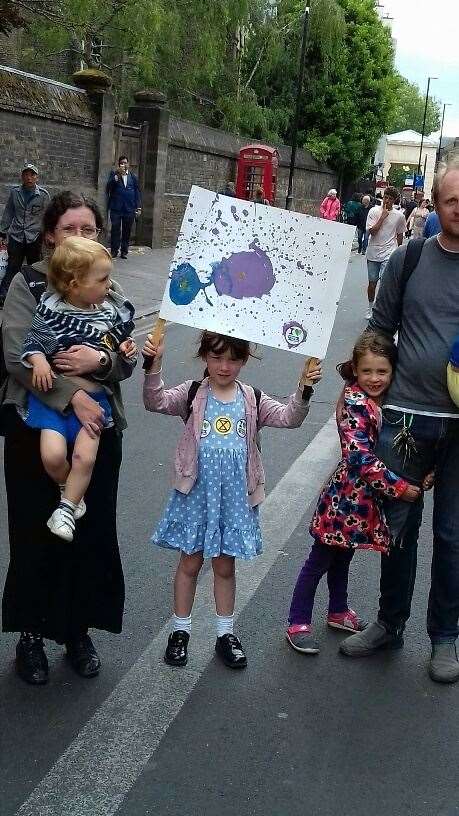 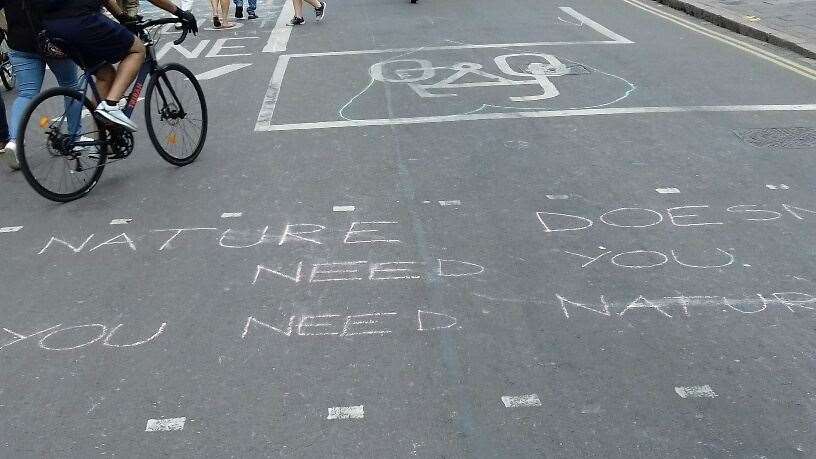 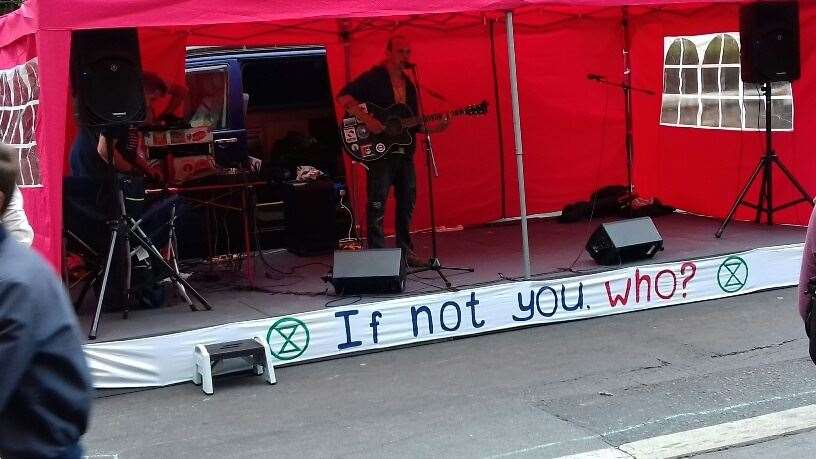 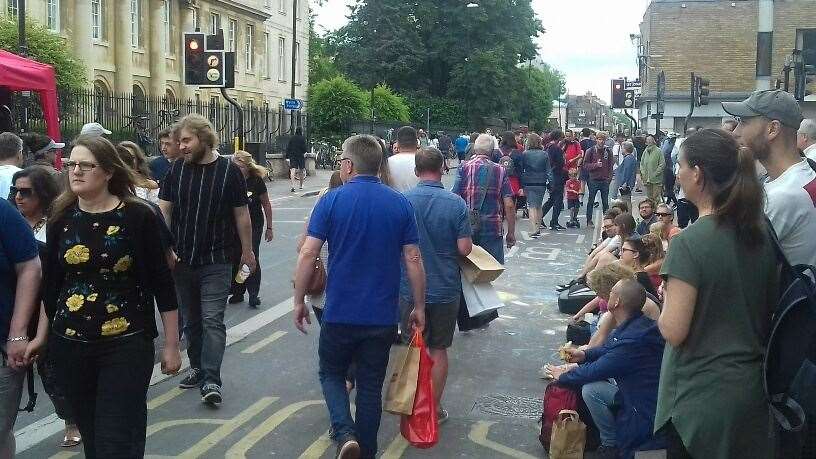 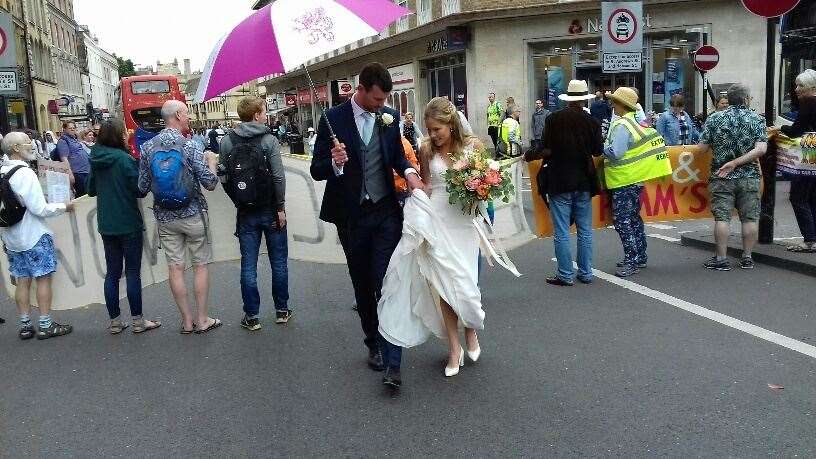 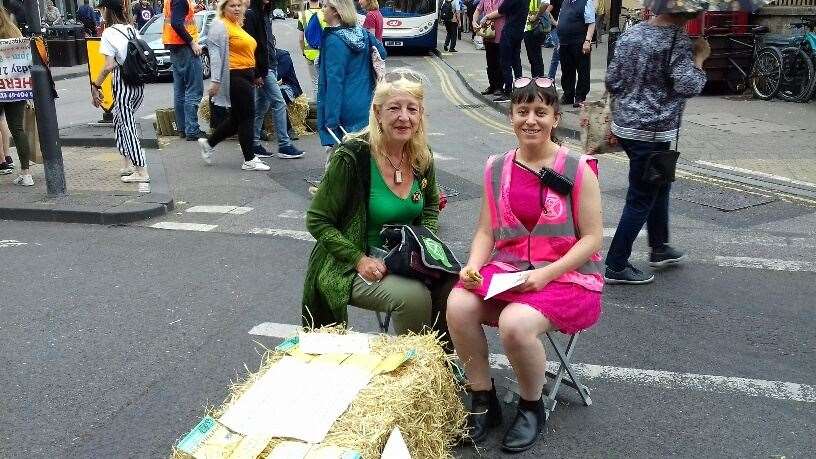 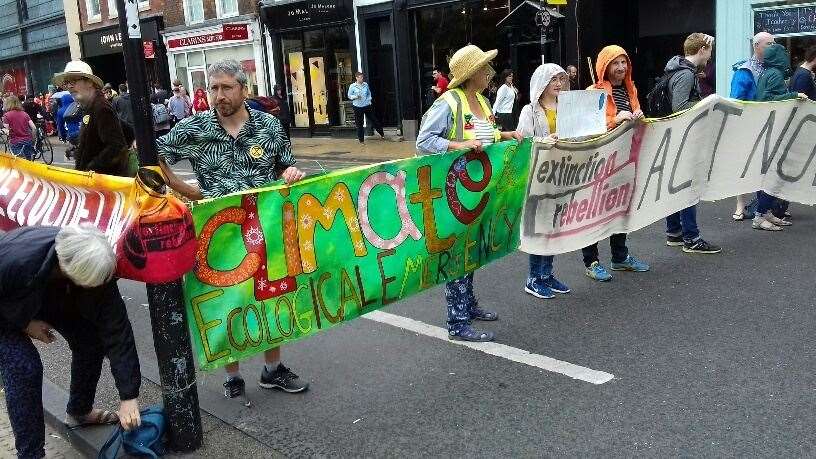 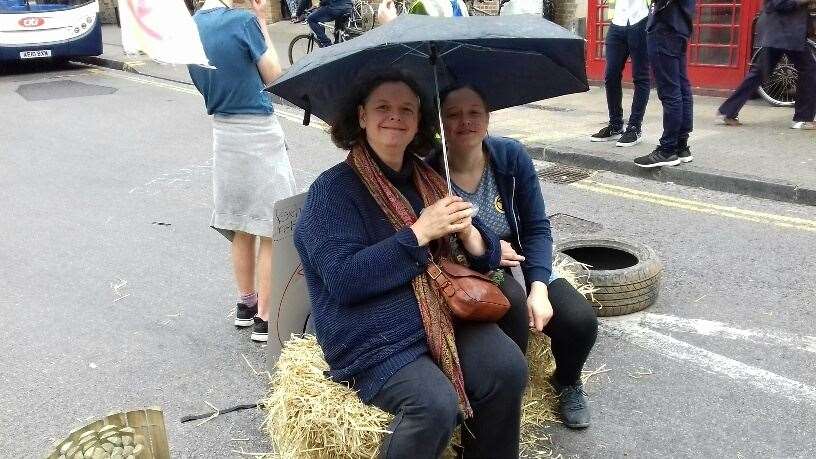 By then the point had been made: this could be the new normal. What's not to like? The streets are quieter. You can have a conversation and not be marginalised by traffic. The air is cleaner. Life goes on, just without being complicit in the burning of fossil fuels. People walk down the middle of Regent Street, including two men with their arms around each other, others chat on their phones, children are playing and cycling, families are wandering along, the police have nothing to do, there's stalls including Garden 4 Life on Downing Street which is blocked by a bale of straw... the most noise in the whole area is coming from the Apple store inside Grand Arcade, otherwise it's all about the acoustic authenticity.

The only irate drivers are on Hills Road, where one burns rubber in his efforts to make his point - it is always a 'he', isn't it? A few sound their horns - but some of them are clearly supporters. An Extinction Rebellion steward blocking the road tells me: "It's been good so far, it's a nice day, we've had a lot more support than anger."

Meanwhile, the second Cambridge Eco Living Festival is taking place in a pop-up at Lion Yard shopping centre. It's busy inside: there's workshops, talks, and some slightly curious art made of stuff pulled from the ocean, which makes you wonder how bad it is down there... the Eco Living Festival is all about how to live without plastic, without buying into fast fashion - how to be a sustainable consumer. It's a journey we're all on now, to a greater or lesser extent depending on your own ethical beliefs and values. 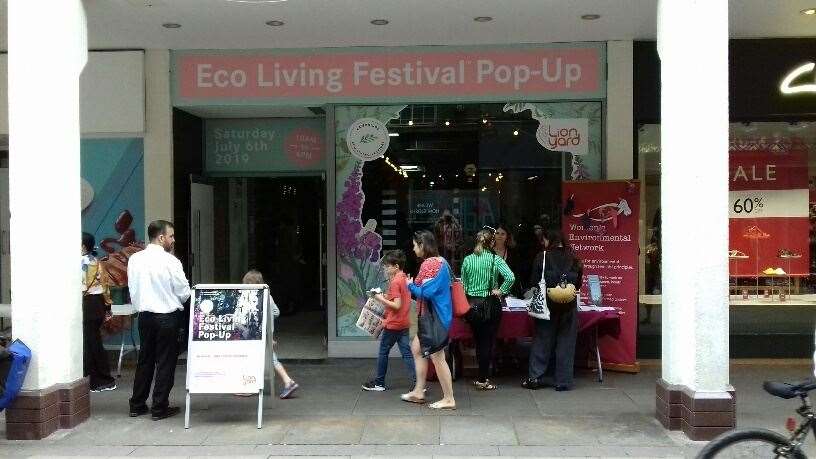 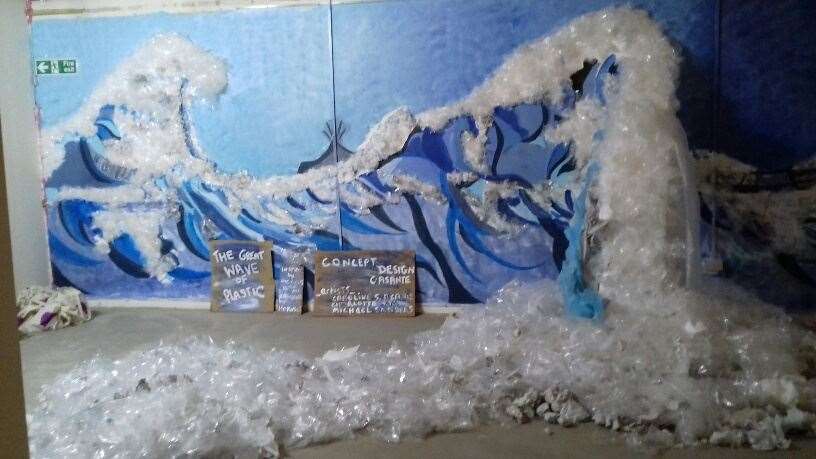 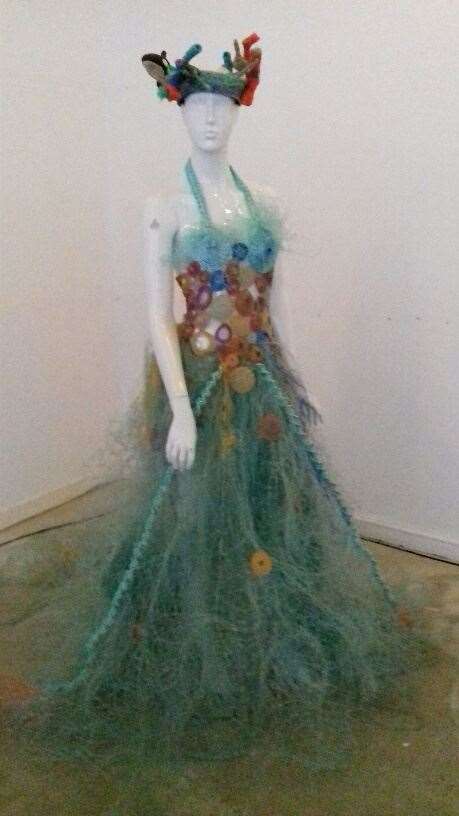 Onwards to the Big Weekend. One of the bigger tents is sponsored by Arm: it has some consoles and maybe a dozen Raspberry Pi's and it's packed. The kids are all over the Pi, assisted by some technicians. But the youngsters seem to know what they're doing. Who can blame them for burying their heads in computers? While Southern California's earthquakes continue, forest fires spiral out of control, the world turns itself on its head - we're going to need their computer savvy to help get us out of this mess. Did you know in France people are sheltering from the heat in limestone caves?

Back on Regent Street a gazebo has been set up. Speakers include Tony Booth and Ella Hone, they're followed by music... Today is a festival of ideas, of better ways to live, perhaps a forerunner of the way it has to be, an early glimpse into the future... and it feels a lot better than the pre-launch publicity.

A traffic-free Cambridge just moved one step closer to reality, and that makes it a big weekend by any reckoning.