More than 45,000 runners from around the world – including many in Cambridgeshire – took on the 2020 Virgin Money London Marathon last Sunday (October 4).

The 40th marathon had participants completing the famous 26.2 miles on a course of their choice any time of the day using an official app to track their achievement.

It was the first virtual run in the event’s history, in a year when the coronavirus pandemic made the usual spectacle impossible.

Neil Parris, 43, from Fulbourn, ran the London Marathon in 2018 and had been training for this year’s event since November last year, clocking up more than 1,100 miles in the process.

He ran his virtual marathon in four laps around Cambridge, and spotted 10 others doing something similar.

“There were terrible conditions but still some very, very keen runners out there,” said Neil, who started his race at Lammas Land, where his family were based throughout.

His children, Zoe and James, made posters of London landmarks and held them up as their dad ran past.

“I did four laps from there – two laps down towards Grantchester and along Grantchester Meadows, and then two laps around the city past the colleges and down the river – so each lap was about a quarter marathon.

“It was a really good route. The distance was just perfect, it was a perfect run – just terrible conditions!”

Neil, who completed the run in the impressive time of three hours, 28 minutes and 15 seconds, is raising money for Cancer Research and has raised around £6,000 so far. Neil’s fundraising page can be viewed at fundraise.cancerresearchuk.org/page/neil-london-marathon-2020. 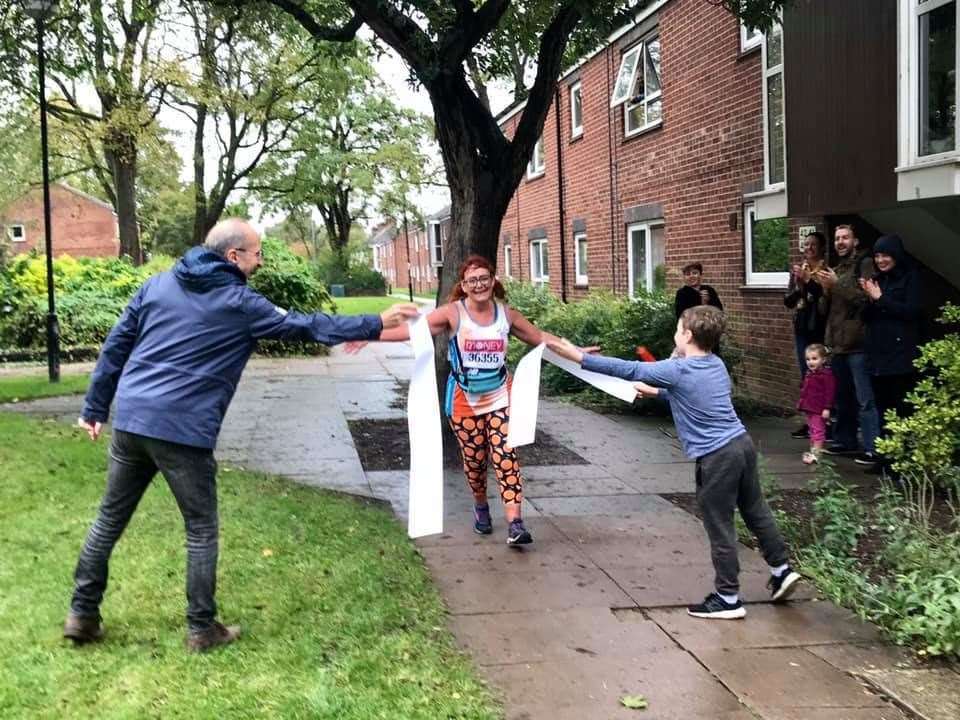 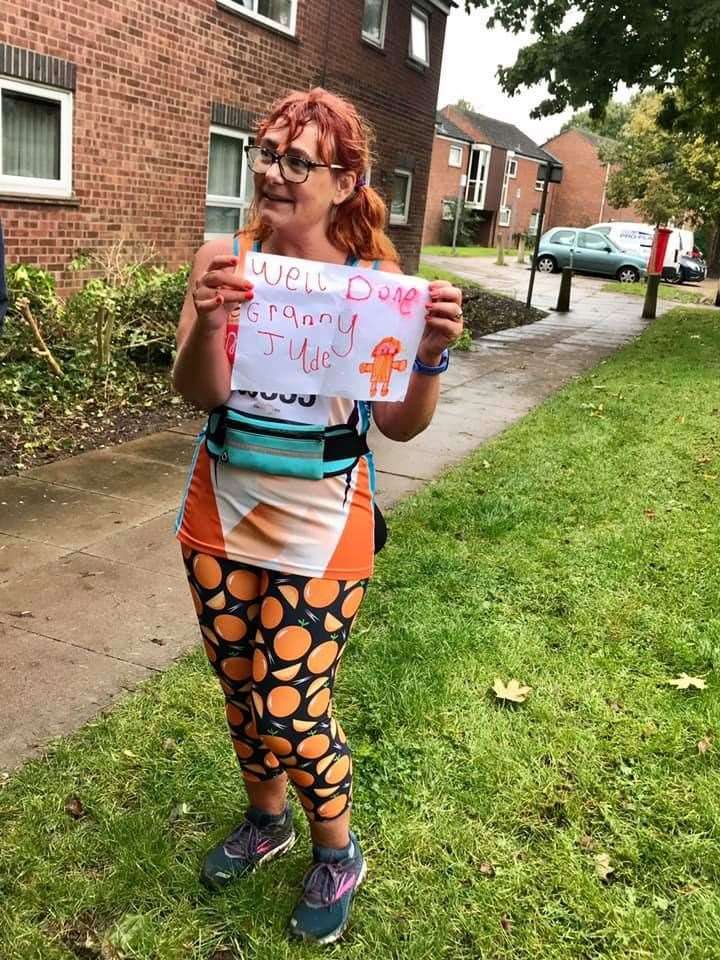 “I did it all around Cambridge,” she said. “I did lots of different laps, all starting and finishing from my flat so that I could stop there and hydrate.

“I did an eight-mile lap that went to Great Shelford and back, and then a six-mile one to Fulbourn Windmill and back... then a five-mile one past Lammas Land out to Barton Road, then a four-mile one around Cherry Hinton Hall.

“Then the last 3.2 miles, I just did many loops around Coleridge Rec, which is right by my house.”

Jude completed it in six hours and 14 minutes and had friends joining her. “I never ran alone – it was like a great big party, it was fantastic,” she said.

“We got beeps and cheers from people driving past and other runners and everything. It was such a great atmosphere, even in that hideous weather.”

Another marathon firsttimer was Karen Olden, 45, from Cherry Hinton, who knows Neil Parris and did the same route as him. “I’d never run over a halfmarathon before,” she said, “and I’d done very limited

training – the most I’d run this year was seven and a half miles.

Kevin Brittain, 38, from Willingham, is the founder of Runpreneur, a vlog for entrepreneurs who like to run. He ran his marathon around the Cambridge Busway in support of the Phab Kids charity.

He was also aiming to break the world record for being the fastest male to run a marathon while dressed as a ninja - which he achieved, completing the course in a time of three hours and 55 minutes (the previous running-a-marathon-while-dressed-as-a-ninja world record was four hours and 17 minutes).

“I think it was my fifth marathon and I've always had a target to raise £50,000 for children's charities," said Kevin, "and doing things like world record attempts is a bit of a PR stunt, but it does generally get people to follow and engage and actually donate a bit more.” 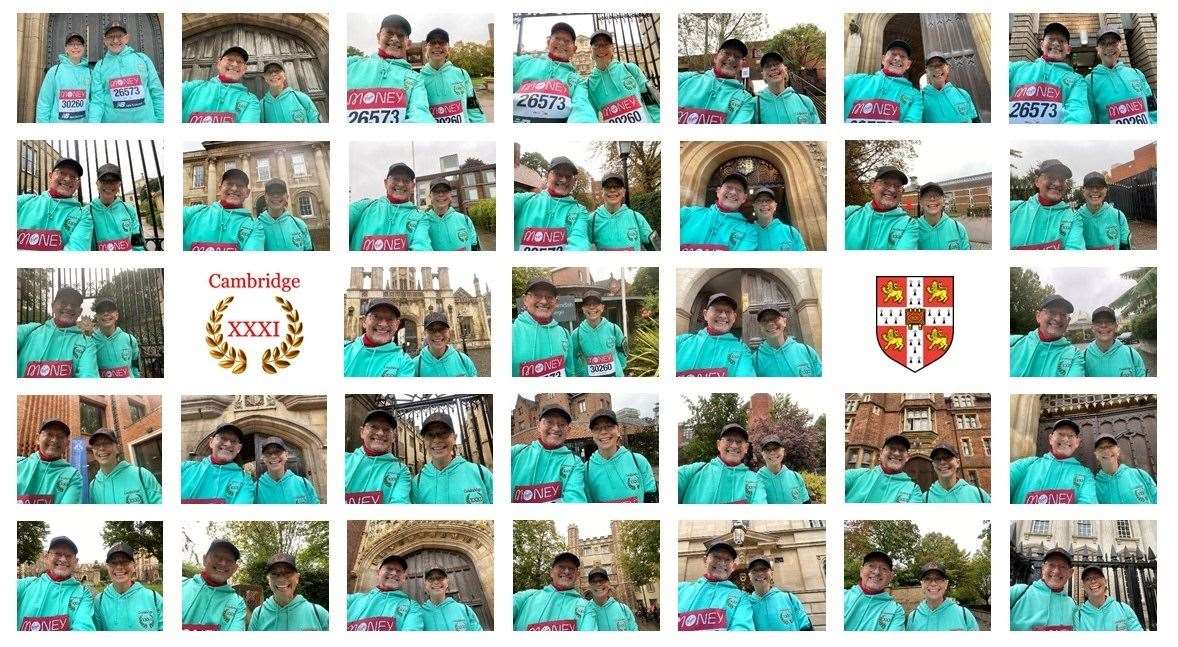 The distance between the 31 colleges is marathon distance, and this feat had not been attempted before – but may yet become an event in its own right.

The couple said: “We will use ‘The Cambridge 31’, as we are calling the marathon, to launch a fund to support projects targeted at recovery and ways to ease the ‘new normal’ life within schools in Cambridge.

“We are delighted to have the support of the University of Cambridge.

“We have secured matched funding to make every donation we receive have twice the impact, and we will oversee the administration and distribution of the funds via Cambridgeshire Community Foundation.”

You can donate to the cause at justgiving.com/crowdfunding/the-cambridge-31.

Look out for a picture special on the London Marathon 2020 and Sawston Fun Run in this week’s Cambridge Independent, in the shops from October 7-13.

Keep up to date with events by signing up for our weekly newslettter.

Discover the treasures of the Cambridge University Library