Baroness Jones of Moulsecoomb visited Cambridge to explore the damage being done to the River Cam – and was met with a barrage of issues causing concern to the community on a sunny day when the city’s populace came out to enjoy the weather prior to expected 40C temperatures on Monday and Tuesday (which is best endured indoors).

Lady Jones is a Brighton-born former archaeologist and deputy mayor of London who has been in the House of Lords since 2013.

“There are only two Greens in the House of Lords,” she said in her introductory comments at the cafe by the Lammas Land pool – the starting point of her walk along the Cam into the centre of Cambridge. “The other is Natalie Bennett and we are fearless women, and we take the green message to all political parties there.

“Today I want to learn for myself, to visit a polluted river, and I also want to talk with authority in the House of Lords but also with Feargal Sharkey, who is great, and Chris Packham who is also interested.”

The tour was organised by Friends of the Cam, which was formed last year to ensure the River Cam is protected at a time when it is at risk of permanent damage through sewage dumps and over-abstraction.

Those at the briefing were invited to introduce themselves to the baroness, who was joined by John Bird, the Big Issue founder and Horningsea resident who became a life peer in 2015. They included Friends of the Cam campaigners Jean Glasberg; Jane Williams, a Waterbeach parish councillor; Ian Ralls of Cambridge Friends of the Earth; and Terry Macalister, author and journalist. They were joined by Cllr Hannah Copley (Abbey, Green Party), environmental activist Monica Hone, Federation of Cambridge Residents’ Associations chair Wendy Blythe, wild swimmer Yvonne Nobis and Sue Buckingham, who was hosting the barones while in Cambridge.

Topics on the agenda for this cross-section of Cambridge community stakeholders included:

- Concerns on the impact of the Paradise Nature Reserve if a Queens College development plan goes ahead. “There will be a huge impact on the nature reserve,” said Jean Glasberg. “They include the threat to eight species of bat, of which two are endangered.”

- The Honey Hill project, and why green land is being bought and sold for developers. “The only reason they chose Honey Hill was because the opposition everywhere else was so vehement,” said Lord Bird.

- Whether the Cam is safe to swim in. “River swimmers are concerned about the quality of the water,” said Yvonne Nobis. After taking samples earlier this year, the Conservators of the River Cam said the water quality was not fit for purpose, and it’s not, because of the level of phosphates… I’ve been sick once.”

- Concerns that the new Local Plan ignores true environmental costs. “There are 16 policies in the Local Plan that have not been properly considered environmentally,” Jean Glasberg told Jenny.

Concerns at the scale of development proposed in Waterbeach. “There’s 8,000 homes right next to the A14,” said Jane Williams. “What does that mean in terms of pollution?”

- The Environment Agency report published in the week, on water and sewerage companies in the UK, which recommended “prison sentences for chief executives and board members whose companies are responsible for the most serious incidents”. (Anglian Water reported 14 serious incidents in 2021, more than any other water authority in the UK.) “We want enforcement,” said Wendy Blythe.

“There is a Cambridge machine which is keeping huge sections of the community compromised,” added Terry Macalister. “The colleges are huge developers, part of a huge growth push which is punishing the environment here.”

“I’ve come here to learn, to be useful,” concluded Jenny. “What I want to do is to get Feargal Sharkey, Chris Packham and others together for a big push. Two members of the House of Lords can’t fix a problem, all we can do is to amplify [concerns about] it.”

A spokesperson for Friends of the Cam said: “We thought it was a really encouraging visit and first round of discussions. Both Jenny and Lord Bird instantly grasped the nature of the problems facing the river Cam, the wider environment and local people from an out-of-control growth agenda.

“We are very excited that both peers have said they will do all they can to raise these important issues in the House of Lords and want to campaign alongside us.

“The reckless behaviour of water companies in Britain has reached such a critical point that the Environment Agency has in recent days called for executives to be jailed. We hope that these kinds of threats from the regulator plus widening campaigns around the Cam and other rivers will bring new policies from water companies but also from policymakers who drive unsustainable growth projects here and wider afield.” 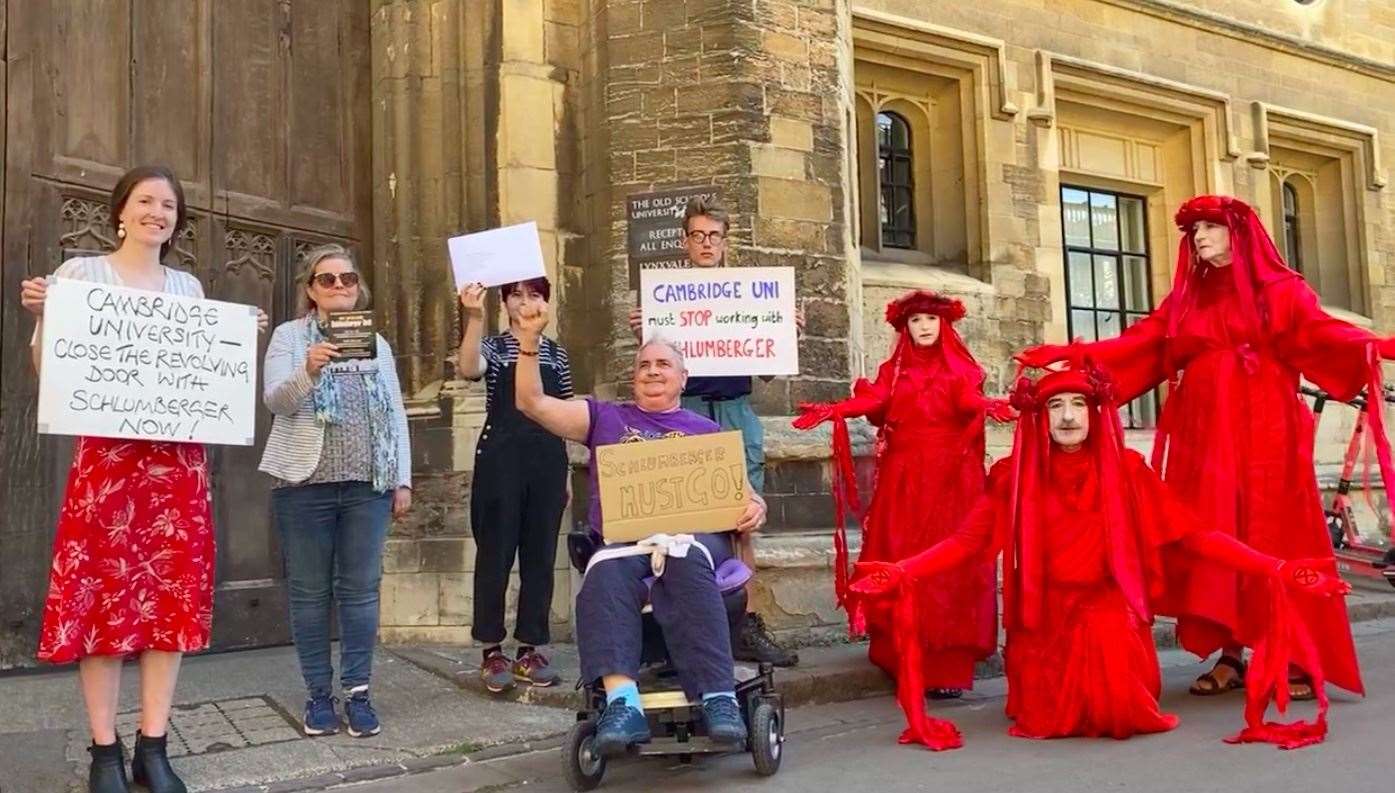 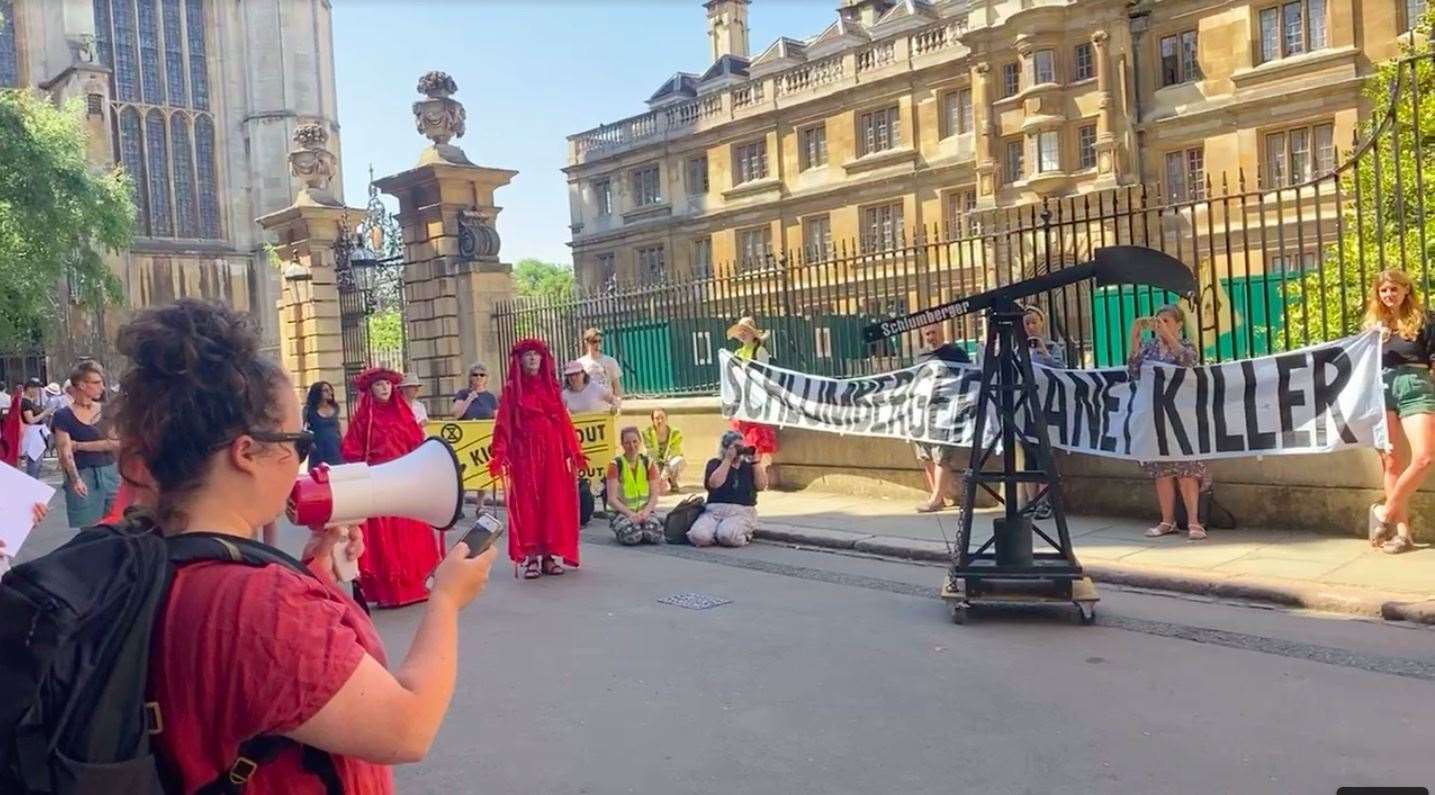 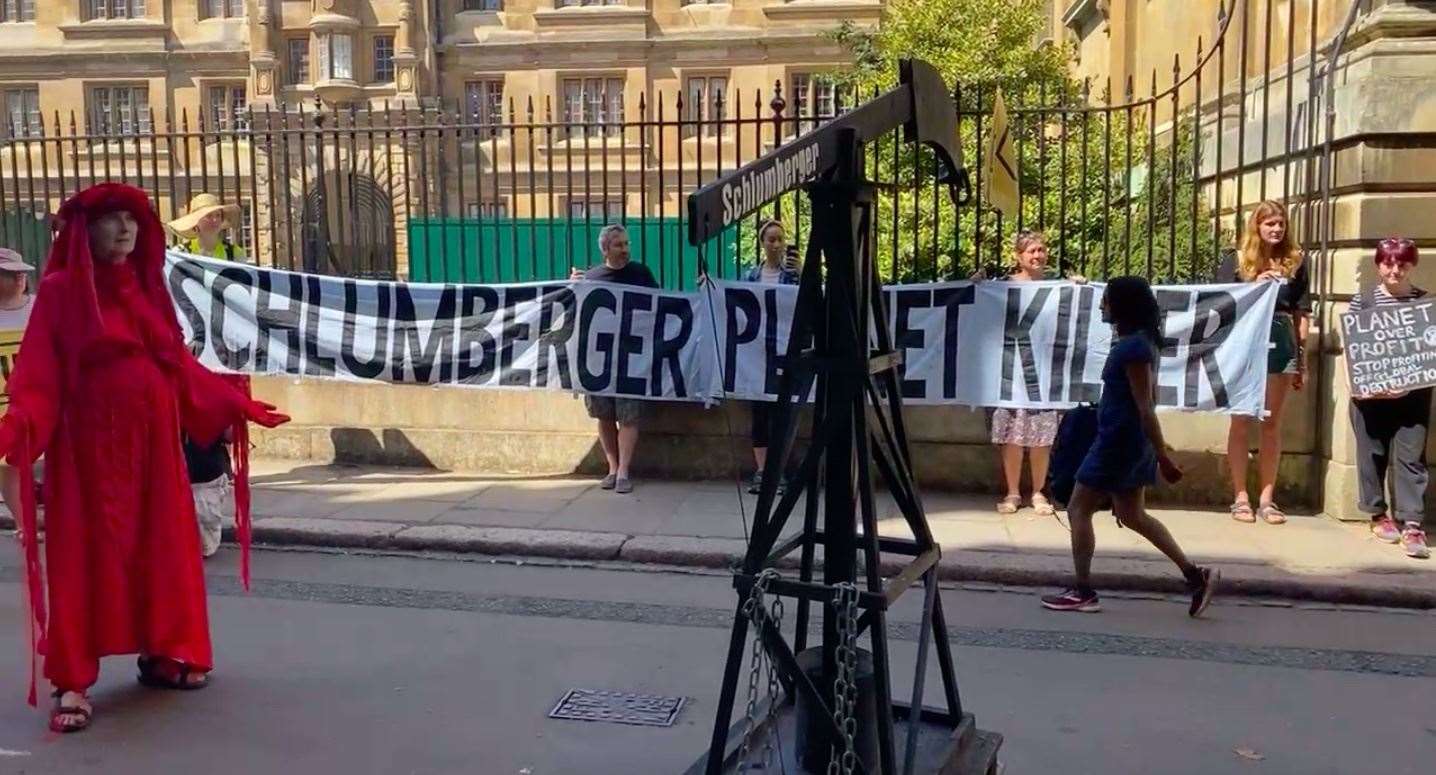 The day also saw a Chisholm Trail celebration, with a guided walk and ride from Cambridge North station to the Abbey stadium between 9am and 1pm.

In the centre of Cambridge, Extinction Rebellion handed in a letter to the University of Cambridge which has been signed by more than 1,400 people, including Rowan Williams, the former Archbishop of Canterbury, and Oscar-winning actor Sir Mark Rylance. The letter calls for the university to cut its ties with oilfield services giant Schlumberger, which has an R&D facility on Madingley Road.

On Monday and Tuesday, the UK is set to experience record-breaking temperatures which could top 40C (104F).