On Friday, June 14, an unusual event took place in a field near Fowlmere: a gathering of indigenous elders opened a four-day festival of dancing, song and ceremonies around a sacred fire. Called a Kiva ceremony after a Hopi Indian tradition, it centres around a Kiva structure, a 13-metre circular excavation dug into the earth as an altar that allows visitors and the elders to physically go under the earth to pray and give thanks. A central fire burns inside this Kiva altar for the four days under the watchful eyes of organisers by Brett and Kathy Kellett plus around 80 attendees.

A Kiva gathering offers the opportunity to interact with indigenous elders and celebrate the wisdom of tribal cultures that have survived - despite horrendous onslaughts on their wellbeing and existence - for thousands of years. This is the third year Brett and Kathy have organiseed the Kiva for Cambridge, with the elders are represented by 12 'wisdom keepers' drawn from every continent on Earth.

But this year is different. For starters, a number of the group will be opening Glastonbury Festival in a few weeks, hosting the rituals and ceremonies performed this weekend (June 14/15) throughout the festival weekend too. This is also the first year 12 have joined together to raise awareness of how climate change affects those on the frontlines, from the jungles of Ecuador to the outback of Australia. The location of the field was guided by a journey undertaken by the core group, to travel the length of the St Michael Line, a megalithic-era ley line - an alignment of landmarks and religious sites - which runs from Hopton-on-Sea in Norfolk to St Michael's Mount in Cornwall.

"We'll be journeying along the Michael and Mary line," said Ben Christie, UK liaison for Wisdom Keepers. "The St Mary Line closely follows the St Michael Line and this spot is in the meridian between the Michael and the Mary Line.

"From here we'll be heading for the Uffington White Horse, and Avebury for the Summer Solstice, then - eventually - we'll end up in Cornwall."

After the morning fire ceremony, there were chants accompanied by drummers as everyone went barefoot into the Kiva and made their way round the circle dug into the ground. Following that, the wisdom keepers spoke. A Catalan speaker said she "wants you all to find your medicine here". An Australian from the Outback lamented "the abuse of culture" in his homeland, adding: "It's good to be part of this. I feel the ancestors here, though I can't feel them in the physical, I feel them all the way back from before, so respect the guardians, and all the beings that have been here before this time."

Erika Gagnon, a Canadian ceremonial leader, said: "We are here to honour all the indigenous people on the planet who have held their traditions and teachings so that we can take the proper action in this moment for humanity on the planet. The Earth will survive [this crisis] - it has survived previous extinctions - but now is the time to stand up for what we believe in. It's an honour to be here."

Kazumi Ohishi is a Okinawan Kaminchu, or shaman/female oracle. Her talk was translated from the Japanese. "Usually someone like her in Japan does ceremonies and rituals in private time. She believes for these messages to now be shared with all of us. She does different kinds of ceremonies but usually they are water ceremonies and she will be doing that here. The water beings come into her and she will convey their messages. If you watch water ceremonies you will understand that the waters are changing." 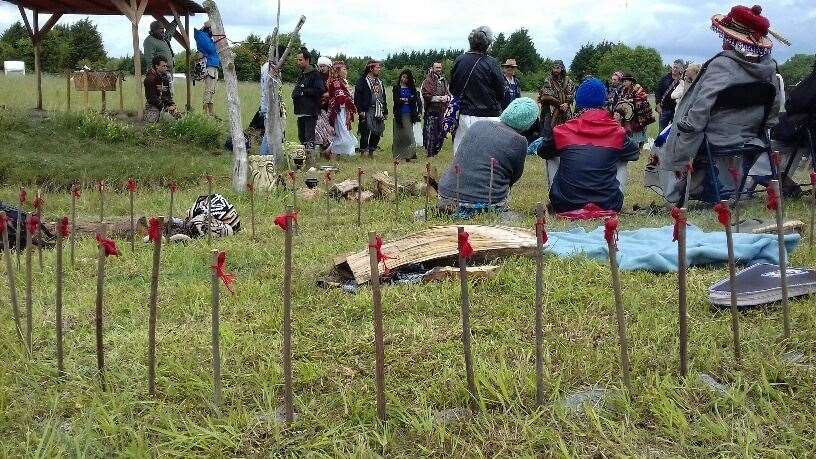 A Guatemalan Indian whose Spanish name is Mario pointed out that the day (June 14) is governed by Tecciztecatl, the Moon God. "I hope we concentrate and receive the lessons so we can transform our own lives and the lives of the people around us."

Don Estolio Rivera de la Cruz, an 80-year old shaman from the Wixarika people of the central and northern highlands of Mexico, spoke of "esta camino" - "this sacred path".

The revival of the Kiva ceremony began in the 1980s, explained two of the group's organisers, Matzuwa Oscar Raiz de la Tierra, from Mexico, and Brazilian-born Vivien Viela.

"One of the elders, Raymundo 'Tigre' Perez, started to recover the work and activate the Kiva again," said Oscar, who is from Sinaloa in Mexico. "He was born in Texas, raised by the Lakota people, and his parents were from the Purepecha tribe in Mexico.

"He was in a sun dance when he saw a woman - mother earth - crying because their children were losing their traditions and language. When the sun dance was finished he went to a group of elders and shared the vision and they said: 'Right, what are you going to do about it?' He reactivated the Kivas and called the first Kiva 'El Canto Pueblo'. The elders called him a holy man for his capacity to leave his body and come back."

That was in 1987: since then the Kiva has combined with a vision quest and a sweat lodge, and the ceremony has taken place in Catalunya in Spain, in Austria and the Netherlands as well as at the Fowlmere site. Each Kiva cycle takes place over four years: it is a "not-for-profit organisation which relies on local support for native people to come here". "Kiva represents the heart of the Earth," concludes Oscar, "and we come here to honour the Earth and thanks for everything we have, especially our families."

The Mayan fire ceremony on the Sunday was conducted by Tata Mario from Guatemala.