Feelings were running high at today’s protest on Mill Road, ahead of Tuesday’s crucial council meeting which will decide whether to reopen the bridge to traffic, or continue to keep it closed.

The experimental traffic order (ETRO) was put in place in June 2020, closing the bridge to all traffic except buses, cyclists and pedestrians.

Cambridgeshire County Council’s highways and transport committee meets on July 27 to decide whether to reopen the bridge, keep it closed or call for another public consultation on the scheme which has split the community into two camps – one saying the area is benefitting from less air and noise pollution, the other saying that it is destroying the area’s ability to do business.

Feelings were always going to be volatile but that was before the extremely loud group of protesters moved down the culturally diverse street yelling “One Mill Road/One Community” into their megaphones. Opposing voices could be heard before they’d gone 100 yards.

“Save Mill Road/Open the Bridge” went the second call-and-response chant, to which one passerby retorted: “No!” Others confronted the protesters on the bridge, where various views were exhanged in heated rather than ugly fashion.

A barefooted Jacob was the first to pop over to tell the protesters to tone it down.

“I live on Mill Road, I think it’s fine it’s closed,” he said. “I’ve seen multiple businesses close down round here but it’s not because of the bridge.”

At one point Romsey councillor Dave Baigent was surrounded by protesters who appeared to view his contribution as unwelcome.

Speaking about the incident immediately afterwards, Cllr Baigent said: “There are lots of people saying we should keep it closed and we won a mandate at the recent local elections to do just that.”

There appear to be communication problems with Mill Road Traders, the group of local traders which has been most vocal about reopening the bridge.

“They won’t talk to us,” said Cllr Baigent of the group. “I’ve offered to talk and they won’t come. The reality is the bridge has been shut and it’s now a question of whether you want to override that. These people are voting to increase pollution in the area, which kills people.”

A female passer-by on the bridge, overhearing this, interjected: “You increase pollution because you force people to drive for miles around to avoid Mill Road.”

“You never do,” said the protester and stormed off.

Piero D’Angelico, spokesperson with Mill Road Traders, responded – also on the bridge – to Cllr Baigent’s suggestion that the door to dialogue was closed.

He said: “We’re working closely with the correct authority, which is not the city council, it’s the county council, and we’ve spoken with the chair, the vice-chair...

Exactly what the right decision is remains to be established. For some, the least inflammatory approach is to introduce more exemptions to the closure, to include for instance traders and local residents, and perhaps blue badge holders. Also at this impromptu conference on the bridge this afternoon was Rowhi Nemer MBE, the founder/owner of taxi company Camcab.

“It might help to open the bridge to traffic during rush hours, 8am to 10am in the morning and later in the afternoon,” he said. “I’m not saying that because it helps our trade: in some ways it helps our trade now because people have to go the long way round to avoid using Mill Road. Allowing traffic through at certain times would be a solution.”

“To have to go around via Hills Road is insane,” agreed Nick Tiley, a Mill Road resident of more than 30 years. “Yes pollution on Mill Road has dropped, but it’s increased significantly on 10 other roads, so what’s being achieved here?”

Cllr Robert Dryden (Labour, Cherry Hinton) visited the scene and commented: “Where’s the pollution going? The worst of it is now on Hills Road.”

He added: “There’s always scope for negotiation. I feel sorry for the businesses round here.”

There’s no doubt the closure of Mill Road bridge has coincided with a collapse in local footfall, but a lot of debate focuses on whether this was in fact the result of the pandemic rather than the bridge closure.

“We’re open,” he said of the current situation, “but there’s a difference between being open and being viable. The statistics are avilable to compare with the situation in 2019 – when the road and bridge were closed for gas works – and now, when the bridge is closed.

“We need to see an improvement. Taxes need to be paid, furlough needs to be paid. We are currently considering how we will manage with the staff we have, if nothing changes.”

With 14 staff at Al-Amin, that’s a lot of livelihoods at stake, but Abdul isn’t the only one facing huge decisions. Mohammed Alhassanin, who runs Moda Barbers, has already had to let staff go. 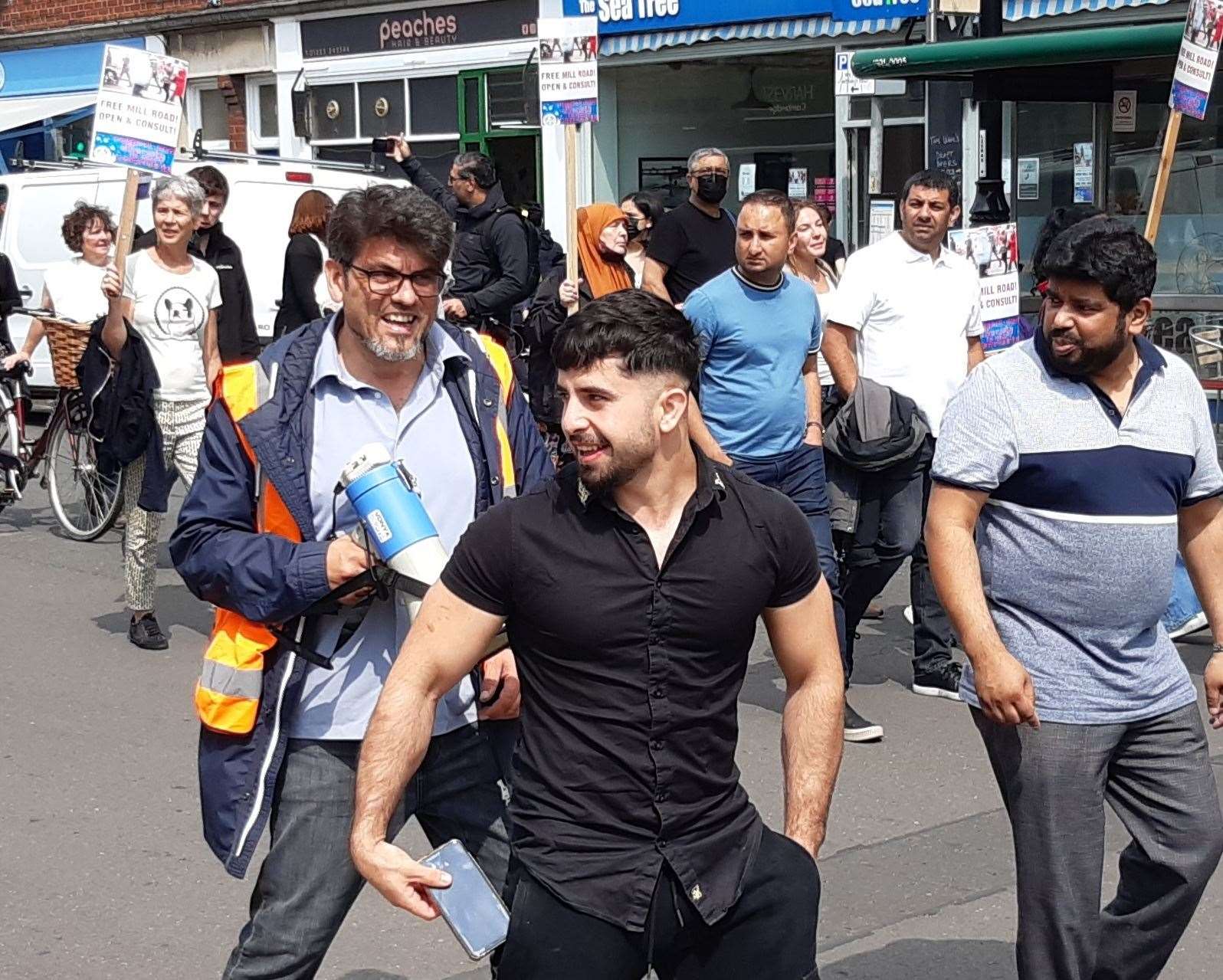 “I’ve lost two employees because I can’t afford to pay them,” Mohammed said. “Last week there was one day when I had two customers. Previously people would drive to come here, but the closure of the bridge has affected me more than the coronavirus.”

There was also anger at the way the bridge closure has been handled – minimal investment has been made to make the area attractive to pedestrians.

“I don’t feel as safe as I do normally, the plastic barriers are unsightly and it’s empty after dark now,” said one protester, while Jacob, who had returned to the fray with shoes on, added: “They make £1m a year in parking charges round here, so why don’t they invest in making the area look better?”

The weight of expectation is now entirely focused on the decision that will be made on Tuesday. Passions are running high, and it is probably inevitable that some people will be disappointed. But whatever the outcome for the bridge, the fact is that a fault line has opened up on Mill Road and the decision that has to be made concerns not just whether the bridge will stay closed or reopen – significant though that is.

“In the last six months 19 businesses have closed down,” says Piero. “Five have opened yes, but another 11 are for sale. This for me is scary.”

“The bridge closure is causing a fracture in our community which is not good,” says Abdul.

“Do we really need this grief and division at this point in our lives?” asked protester and Mill Road resident Chris Smith. “People need time to heal.”

“This is a whole lot of nonsense which should never have been foisted on us,” said resident and protester Francis Clegg.