A walk around Fulbourn for your daily exercise over the course of the Easter weekend was one for the eagle-eyed.

There was no need to ask Where’s Wally as he could be spotted by many on the streets of the village, along with the likes of Mary Poppins, Harry Potter and Spider-Man.

You could even see a mermaid hanging from an upstairs flat.

In these extraordinary times, it is difficult to work out what is the new normal, and a scarecrow weekend in Fulbourn may become just that.

Resident Robin Newell had the idea to engage families during the long weekend, and made the suggestion online on a village information page. 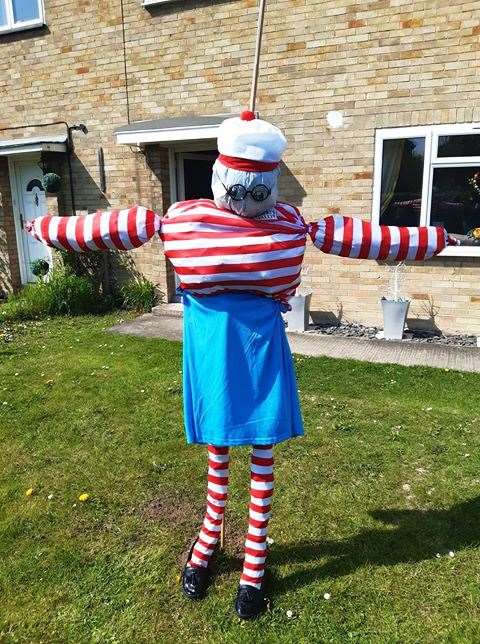 “I put the post on and within minutes I got loads of people coming back saying they were interested and would do it,” says Robin, who admitted it was just a random thought as his grandson is a farmer.

“It was basically my idea for the parents and children to make scarecrows at home, put them on show in the front garden and the village could walk round looking at them – with social distancing – on their daily walk.

“The response has been unbelievable. All the feedback has been wonderful.

“Everybody was over the moon with it, and all want to do it as a yearly thing over Easter.

“There have been some lovely designs – I couldn’t believe it, seeing all the pictures because I’m inside all the time due to my age.”

There were 57 scarecrows in total, with the village school making a number, including a group on a seat and one on the tyre swing.

But which was Robin’s favourite?

“I liked Mary Poppins and the mermaid, hanging off the balcony,” he said.

The winner, which earned a prize donated by the village Co-Operative, was the crow on the gate scarecrow.