Planting trees and sorting out the water crisis were the themes of the October youth strike in Cambridge.

Around 300 participants gathered at Shire Hall and marched to Guildhall where they read out ‘An Open Letter to the City Council’ to five councillors and politicians.

The organisers, Cambridge Schools Eco Council, asked the protestors to wear green and brown to raise awareness of “how the changing climate hurts Cambridge trees and flora”, so the participants dressed up in a variety of tree motifs, both worn - head-dresses were popular - and carried like placards.

After the letter, which urges the council to get on with it, walk their talk and pull their socks up - the sort of thing that adults would have been saying to adolescents in a previous era - the councillors were given the opportunity to respond, and all of them praised the marchers for their efforts.

“Planting trees is so important for our wildlife and rivers,” she told the protestors. “We haven’t got enough land to plant them all so to solve this problem we need you to plant trees in your garden. We want to get thousands of trees planted in the next few years.”

This is an actual policy, as Cllr Thornburrow explains: "Cambridge City Council’s citywide tree strategy 2016-2026 sets the council’s overall strategic vision for tree management in Cambridge and one of its goals is to increase tree canopy cover from 17 per cent to 19 per cent by the 2050s." Unfortunately asking people to plant trees in their garden isn’t placing the same emphasis on the problem as down the road in Essex, where the council is spending £1m in the next five years to plant 375,000 trees. And 2050 is too far away.

Next up was Cheney Payne - the deputy leader of the Liberal Democrats at the city council, and a councillor for Castle ward - whose Macbeth analogy went down well.

“Is anyone reading Macbeth?" Cllr Payne asked rhetorically in her address. "In Macbeth, when Great Birnham wood comes to high Dunsinane hill, it is a symbol that Lord and Lady Macbeth have pushed things too far: what they have done is so terrible that it looks like even the natural world is trying to stop them. This is what we have been doing to our planet: humans have taken so much that it will now take a huge amount of work to mend the damage we have caused.” 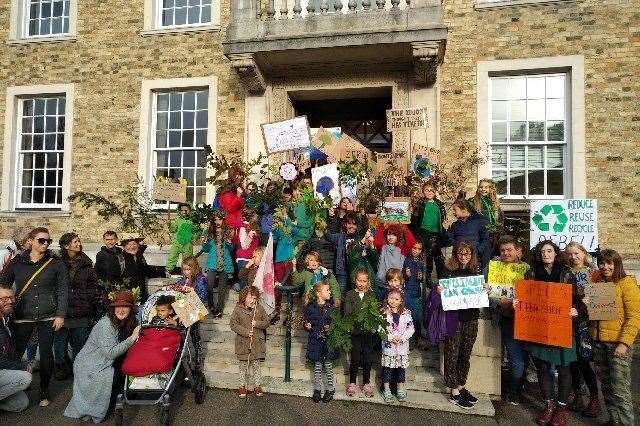 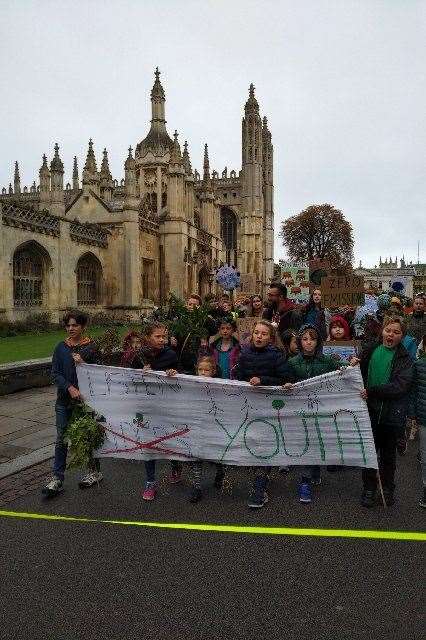 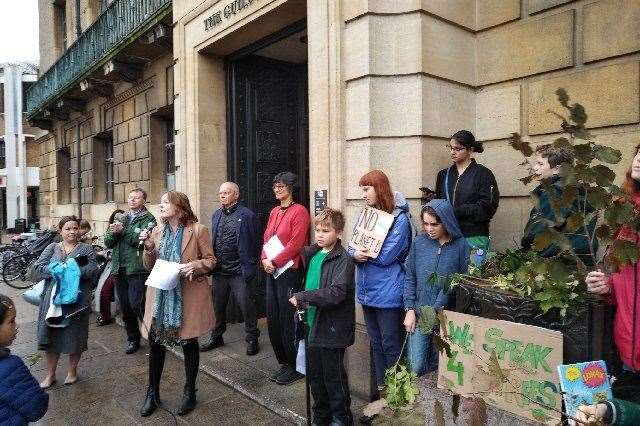 Cllr Markus Gehring (Newnham, Liberal Democrat) told the crowd: “Give yourself a bit round of applause, because striking when you’re on holiday puts us politicians to shame.” He was perhaps referring to the recent statement by Prime Minister Boris Johnson that he would lead would lead MPs on a “strike” if they didn’t agree with his general election timetable. The Government would “do the bare minimum to keep the country running” while pursuing other ways of forcing an election, he said.

It must be strange being a child or adolescent today. Denied the vote because they are supposedly not mature enough to understand the issues - while they clearly do - they watch as adults throw tantrums when they don’t get their way over a piffling election date. Forced to watch the world burn, they take to the streets as elected politicians take to their metaphorical golf courses.

The most powerful speech of the day was given by Luana Fernandes, a 15-year-old Parkside pupil, who said that the power to change the way the world is run lies in the hands of the generation teen.

Luana laid out the reasons for her anger at the current generation in control of the planet’s destiny, and how multinational corporations try to build a veil of silence over the truth of climate breakdown. She illustrated this argument with a banned palm oil video, and thanked her year 7 Geography teacher for turning her into a climate activist by “showing the class a disgusting video of someone eating a chocolate bar that turned into a gorilla finger” - because the palm oil used in the chocolate, as she said, is the cause of 22 orang-utans being killed every day in illegal deforestation activities.

“I refuse to give money to a company who commits genocidal acts, lies to mothers in Africa and uses child labour,” Luana concluded.

Having started off the year protesting about the slow response by national governments to the climate emergency, Cambridge’s school strikers have now identified the two issues that are having an effect on the local environment. The need to plant trees is one worry, the lack of water in the chalk hills around Cambridge is another.

Cllr Thornburrow invited a school striker to an emergency meeting on the water crisis on November 5. As executive councillor for planning, Cllr Thornburrow will chair the Guildhall meeting with river experts. Cllr Payne’s concern, meanwhile, is that the aim of making Cambridge carbon neutral by 2050 is too late.

“The Liberal Democrats are calling on the city council to do better,” she told the Cambridge Independent. “The carbon neutral date should be 2030.”

“The date matters less than acting on the issues now and urgently,” Cllr Thornburrow said of the issue.

The next school strike, on November 29, will have a water-based theme.