Cambridge artist Katy Bailey is known for pushing the technical horizons of her art and is showcasing two techniques previously unused for 2021 Cambridge Open Studios.

The exhibition is up and running, with around 440 artists contributing across the city. It takes place over the first four weekends of July: studios are generally open between 11am and 6pm on the Saturday and Sunday. Each artist can take part for one, two, three or all four weekends.

Cyanotype art was created in the 19th century by engineers, and were the first blueprints. Ferric ammonium citrate is mixed with potassium ferrycyanide.

“The solution lasts two hours once it’s made up,” says Katy, who also works as a psychotherapist. “After that it doesn’t work.”

The mixture is applied to rock or prepared paper and an object is placed on it. It could be a flower, or one of the hundreds of objects Katy collected during her walks in the last 18 months. After being in the sun for half an hour the flower or shell or piece of wood is taken off and the rock or paper is washed in water.

The results are startling.

The waters separates the shape of the object from the background.

“I discovered the technique last year when I was doing my MA,” she says at her home on Cherry Hinton Road. “It’s a way of preserving objects into something permanent – to turn them from something broken to something beautiful. It’s table art in the end, something I could do at a time when you couldn’t do anything else. This is the first time I’ve exhibited them. Lots of the stones have sold. 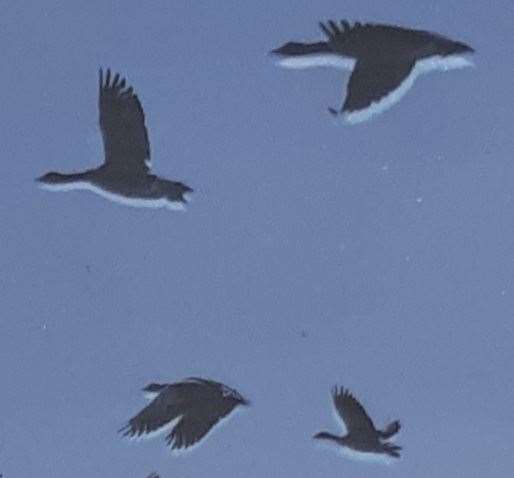 “You can use materials as well, so I’ve got some lovely feathers on silk. I’ve made hundreds of rocks, materials, paper – even on eggshells.

“The first ones are the larger ones in the sitting room, that was late summer last year.”

Katy initially investigated drypoints, which are scratched with an etching tool on to plexiglass, upon which ink is applied and wiped off. The ink remains caught in the incisions and creates the image.

“Then I went on to carborundums, using grit, then I was printing photos of woods on to acetate and implanting into resin and cyanotypes, then I thought ‘I could use the acetate images on cyanotyes’.

“I think there’s a lot more experimenting to be done.”

The best way to appreciate the scale of Cambridge Open Studios is to download the app here.